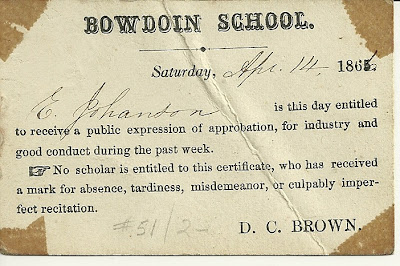 A small card dated Saturday, April 14, 1866, showing that E. Johanson had achieved a week of industry and good conduct at the Bowdoin School.  The name of D. C. Brown is imprinted on the card.


Hopefully readers will have some insights into the identity of student E. Johanson. 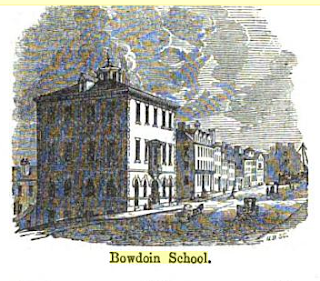 The Bowdoin School was established in 1821 and named in honor of Governor James Bowdoin.


D. C. Brown was Daniel C. Brown, born in Kingston, New Hampshire on 28 October 1814, the son of Benjamin and Mary Brown.  After graduating from Middlebury College in Vermont, he accepted a teaching position at Arlington, Massachusetts.  Eventually he became Master at the Bowdoin School in Boston and served there for twenty-nine years.


Daniel died 3 July 1884.  A Memorial booklet with a sketch of his life and eulogies of friends and colleagues is online.