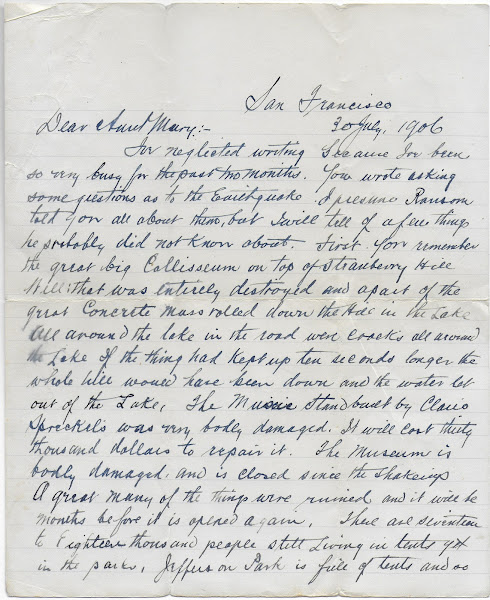 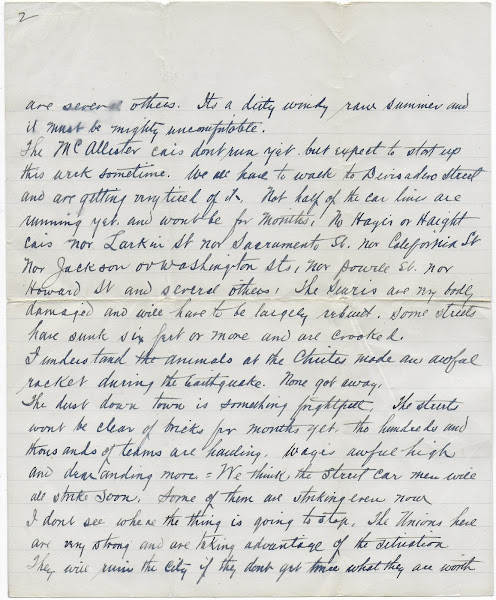 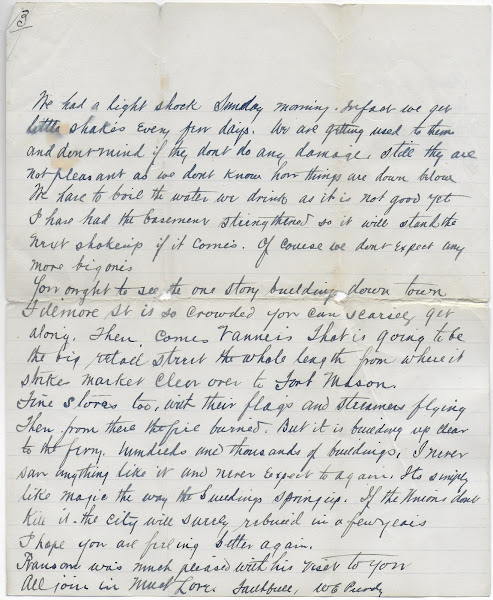 Although William was living in San Francisco at the time of the earthquake, he later moved to Berkeley, California. When he died, he was vice-president and cashier of Bausch and Lomb Optical Company of California. He and Helen had three children. 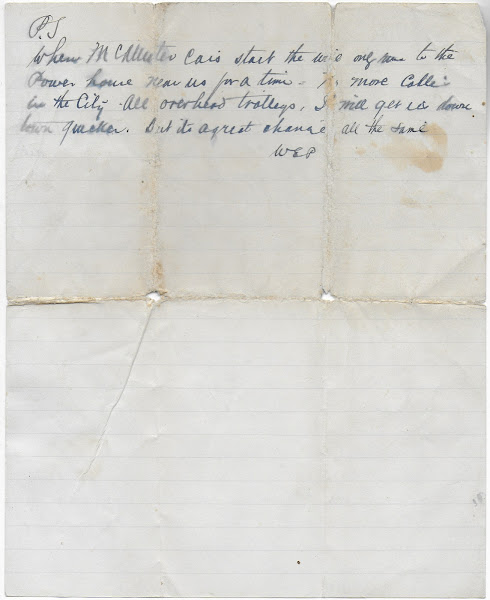 Transcription - please weigh in with any needed corrections
San Francisco
30 July 1906
Dear Aunt Mary:-
For neglected writing because I've been so very busy for the past two months. You wrote asking some questions as to the Earthquake. I presume Ransom told you all about them, but I will tell of a few things he probably did not know about. First, you remember the great big Colliseum on top of Strawberry Hill. Well that was entirely destroyed and a part of the great Concrete mass rolled down the Hill in the Lake. All around the lake in the road were cracks all around the Lake. If the thing had kept up ten seconds longer the whole hill would have been down and the water let out of the Lake. The Music Stand built by Claus Spreckels [Claus Spreckels (1828-1908] was very badly damaged and is closed since the Shakeup. A great many of the things were ruined and it will be months before it is open again. There are seventeen to eighteen thousand people still living in tents yet in the parks. Jefferson Park is full of tents and so are several others. It's a dirty windy raw summer and it must be mighty uncomfortable.
The McAllister cars don't run yet but expect to start up this week sometime. We all had to walk to Divisadero Street and are getting very tired of it. Not half of the car lines are running yet and won't be for months. No Hayes or Haight cars nor Larkin Street nor Sacramento St. Nor California St nor Jackson or Washington Sts. Nor Powell St nor Howard St and several others. The streets are very badly damaged and will have to be largely rebuilt. Some streets have sunk six fee or more and are crooked.
I understand the animals at the Chutes made an awful racket during the Earthquake, None got away.  The dust down town is something frightful. The streets won't be clear of bricks for months yet tho hundreds and thousands of teams are hauling. Wages awful high and demanding more. We think the street car men will all strike soon. Some of them are striking even now. I don't see where the thing is going to stop. The Unions here are very strong and are taking advantage of the situation. They will ruin the City if they don't get twice what they are worth.
We had a light shock Sunday morning. In fact we get little shakes every few days. We are getting used to them and don't mind if they don't do any damage. Still they are not pleasant as we don't know how things are down below. We have to boil the water we drink as it is not good yet. I have had the basement strengthened so it will stand the next shakeup if it comes. Of course we won't expect any more big ones.
You ought to see the one story buildings down town. Fillmore St is so crowded you can scarcely get along. Then comes Van Ness. That is going to be the big retail street the whole length from where it strikes Market clear over to Fort Mason.
Fine stores, too, with their flags and streamers flying. Then from there the fire burned. But it is building up clear to the ferry. Hundreds and thousands of buildings. I never saw anything like it and never expect to again. It is simply like magic the way the buildings spring up. If the Unions don't kill it,  the City will surely rebuild in a few years.
I hope you are feeling better again. Ransom was much pleased with his visit to you. All join in much love.
Faithfull, W. E. Purdy
P.S.
When McCallister cars start, they will only run to the Power House near us for a time. No more cable in the City. All overhead trolleys. It will get us down town quicker. But it's a change [or shame] all the same.
W. E. P.
If you have corrections and/or additions to the information above, please leave a comment or contact me directly.
Posted by Pam Beveridge at 7:22 AM