1847 Letter from John B. Richards at Bangor, Maine, to his Father John D. Richards at Ellsworth, Maine: re: Henry Scott & Mr. Collett 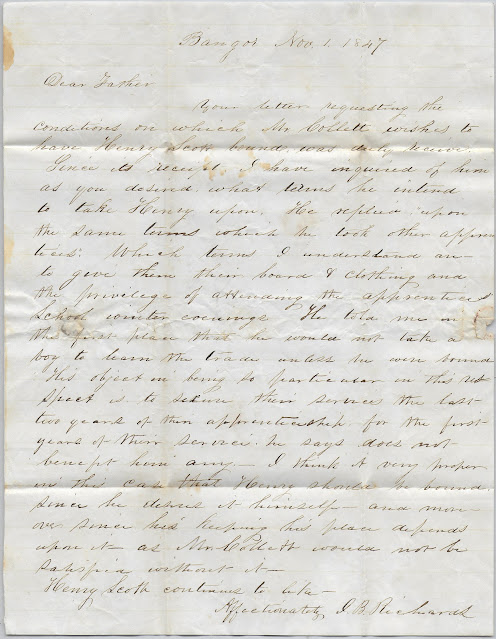 1847 letter from J. B. Richards at Bangor, Maine, to his father John D. Richards at Ellsworth, Maine.  The letter concerns the possible apprenticeship of Henry Scott to Mr. Collett, presumably Bangor, Maine, file maker Thomas Collett, his younger brother Job Collett, or Thomas' son John Collett.
Transcription
Bangor Nov 1, 1847
Dear Father
Your letter requesting the conditions on which Mr. Collett wishes to have Henry Scott bound was duly received. Since its receipt, I have inquired of him as you desired what terms he intends to take Henry upon. He replied, "upon the same terms which he took other apprentices". Which terms I understand are - to give them their board & clothing and the privilege of attending the apprentices school winter ___. He told me on the first place that he would not take a boy to learn the trade unless he were bound. His object in being so particular in this respect is to secure their services the last two years of their apprenticeship, for the first years of their service he says does not benefit him any. I think it very proper in this case that Henry should be bound. Since he desires it himself - and moreover since his keeping his place depends upon it - as Mr. Collett would not be satisfied without it.
Henry Scott continues to like -
Affectionately, J. B. Richards
John D. Richards was presumably John Davis Richards; son J. B. Richards was presumably John Black Richards.
Read more about the Collett family here.
I'd like to know which Henry Scott the prospective apprentice was and if he pursued the apprenticeship and continued on in the trade. 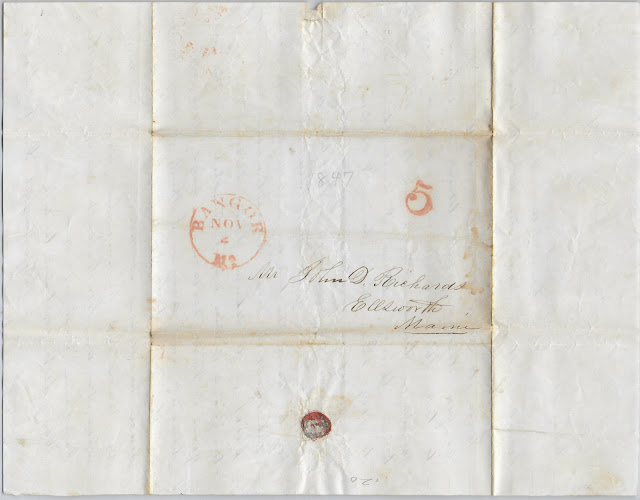 Posted by Pam Beveridge at 7:10 AM