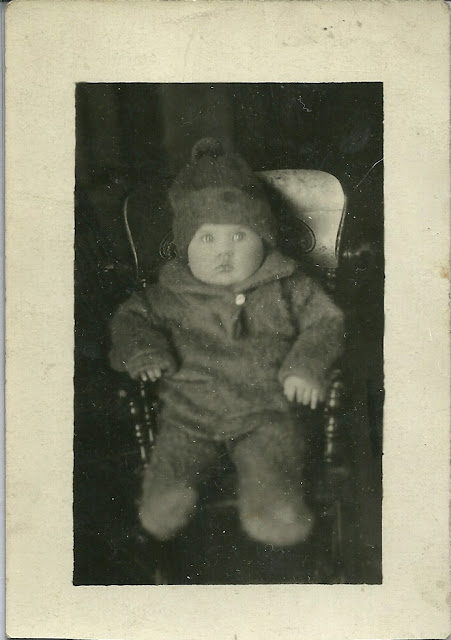 Richard Harris Sennett at the age of nine months; presumably of Meddybemps, Maine, and Calais, Maine. 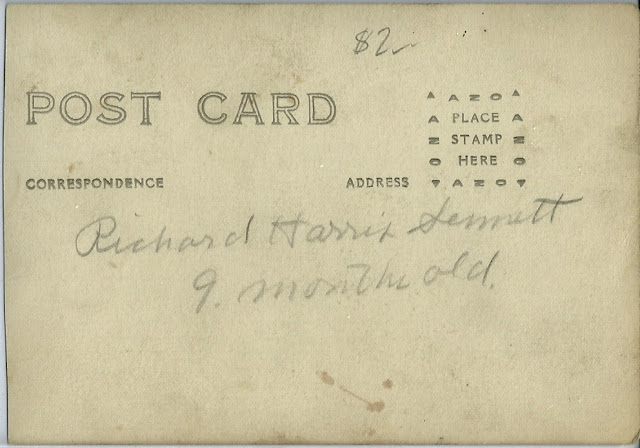 I believe this is the Richard Harris Sennett who was born in Maine in 1923, son of Richard James Sennett and Nettie May (Fenlason) Sennett, who were born at Meddybemps, Maine, and Wesley, Maine, respectively.

Richard Harris Sennett married New Brunswick, Canada, native Viola Irene Nielson in 1948 at St. Stephen, New Brunswick.  They divorced in Washington State in 1929; their divorce record indicates they had 5 children.  Interestingly, on their New Brunswick marriage record, Richard said that he was born at Turner, Maine, in Washington County.

The actual Turner, Maine, is in Androscoggin County, where his parents may have had ties, as they both died in Androscoggin County.  On the other hand, Turner was a common surname in eastern Washington County and Charlotte County, New Brunswick, so perhaps Richard was referring to a "Turner" village.

Richard and Viola appear to have lived in New Brunswick, Canada, for a time but eventually moved to the western United States.

If you have corrections to the information above, or an alternate theory as to the identity of Richard Harris Sennett, please leave a comment or contact me directly.  Please be careful about posting information about living or recently deceased people.

Posted by Pam Beveridge at 6:46 AM