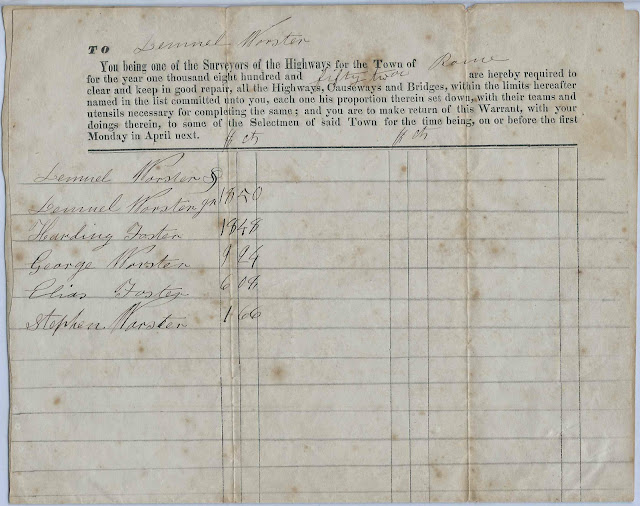 1852 Warrant from Rome, Maine, from Assessors Nathan P. Martin and Thomas Tracy to Lemuel Worster for his portion of road upkeep, beginning at the Mercer Road on the cross road near the Hersom Schoolhouse so called Eastardly on said Road to Stephen P. Knight Bars opposite of his Barn to which you are to observe and conform yourself." 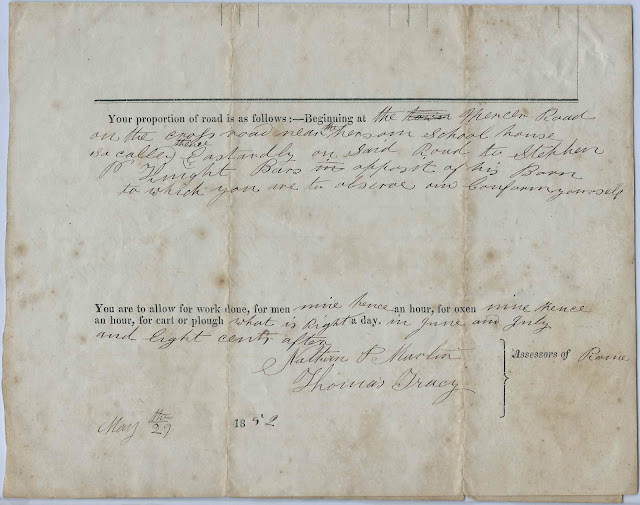 Lemuel Worster was presumably the Lemuel Worster born in 1789 at Berwick, Maine and who died at Rome, Maine, at the age of 87 in February 1876, as shown on a record in Maine, Nathan Hale Cemetery Collection, ca. 1780-1980.

He married Nancy Marson [or Mason or Marston ?] on November 11, 1815 at Gardiner, Maine - Maine Marriages, 1771-1907.  They had several children, including the following three, whose names also appear on the Warrant:

As for Harding Foster and Elias Foster, also mentioned on the Warrant:
The Assessors:
The Stephen P. Knight mentioned in the description of the area that Lemuel Worster was assigned to upkeep was presumably the Stephen P. Knight who was born in 1796 and died in 1871.  He married Reliance Higgins on December 1, 1824 at Rome, Maine - Maine Marriages, 1771-1907.

The Rome annual report of 1930 includes a question of whether to sell the Hersom schoolhouse to the highest bidder, but its name appears again in a 1936 town report so the building was either reprieved or replaced by another building given the same name.