1875 Letter to Ida G. Mansir from her Sister Edith at East Pittston, Maine 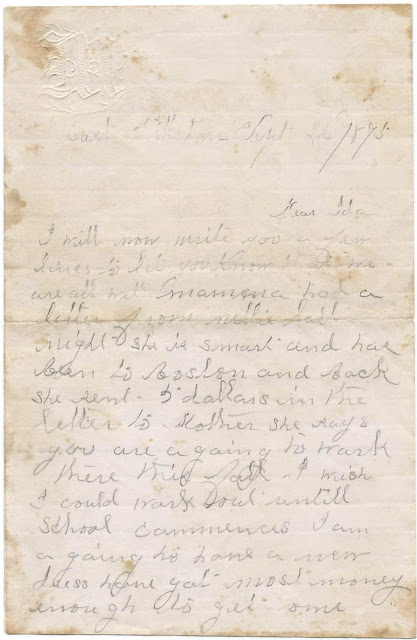 Letter dated September 26, 1875 at East Pittston, Maine to sister Ida G. Mansir at Box 110, Pittston, Maine, who appears to be away from home working. In those days of slow and difficult transportation, people didn't have to be all that far from each other to write letters to one another.

Ida had six siblings and one half sibling, but the letter appears to have been written by a younger sister, which would lead me to Ida's younger sister Edith C. Mansir.

A transcription appears farther below.

Ida G. Mansir was born March 25, 1858, the daughter of Charles Mansir and Martha A. (Murphy) Mansir.  Interestingly, the letter has a teasing mention of Ida and Daniel Reed, who would become Ida's husband in 1881.

People mentioned in the letter: 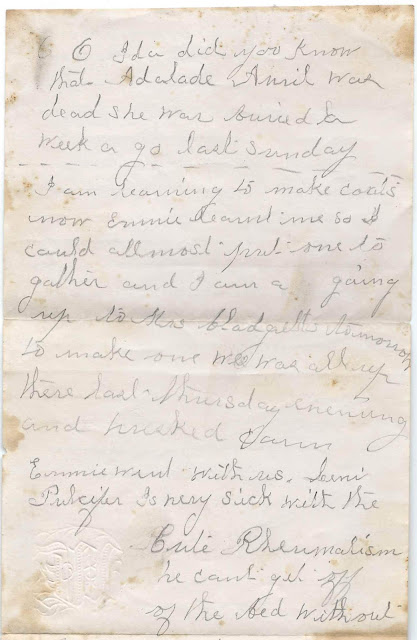 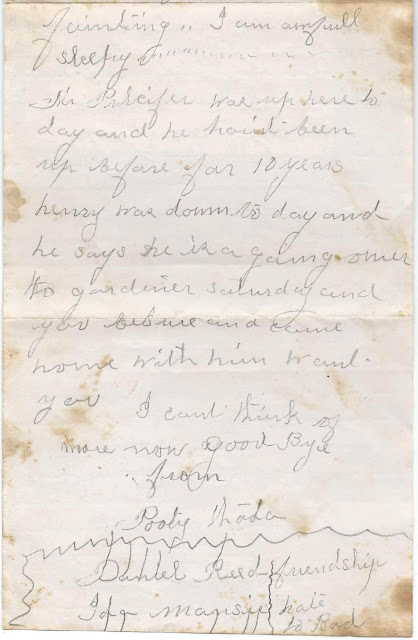 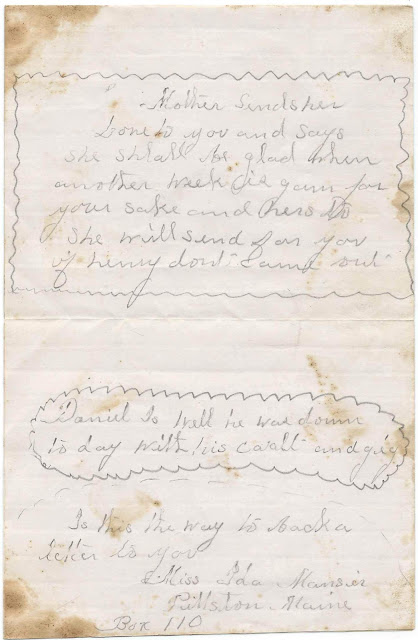 East Pittston, September 26, 1875
Dear Ida
I will now write you a few lines to let you know that we are all well.  Grammie had a letter from Nellie last night.  She is smart and has been to Boston and back.  She sent 5 dollars in the letter to Mother.  She says you are a going to work there this fall.  I wish I could work.  __ until School commences.  I am a going to have a new dress.  Have got most money enough to get  one.

O, Ida, did you know that Adalade Avril [Adelaide Averill, "Addie"] was dead.  She was buried a week ago last Sunday.

I am learning to make coats now.  Emmie learnt me so I could almost put one together and I am a going up to Mrs. Blodgett's tomorrow to make one.  We was all up there last Thursday evening and husked corn.

Emma went with us.  Leni Pulcifer is very sick with the Cute [acute ?] Rheumatism.  He can't get off of the bed without fainting.  I am awfull sleepy.

Mr. Pulcifer was up here today and he haint been up before for 10 years.  Henry was down today and he says he is a going over to Gardiner Saturday and you be sure and a come home with him.  Want you.  I can't think of more now.  Good Bye, from
Pooty ___

Mother Sends her Love to you and says she shall be glad when another week is gone for your sake and hers too.  She will send for you if Henry don't come out.

Daniel is Well. He was down today with his __ and gig.

Is this the way to back a letter to you.  Miss Ida Mansir, Pittston, Maine, Box 110

If you have further information on the Mansir family of Pittston, Maine, or if you can fine tune the transcription, please leave a comment or contact me directly.

Posted by Pam Beveridge at 1:33 PM