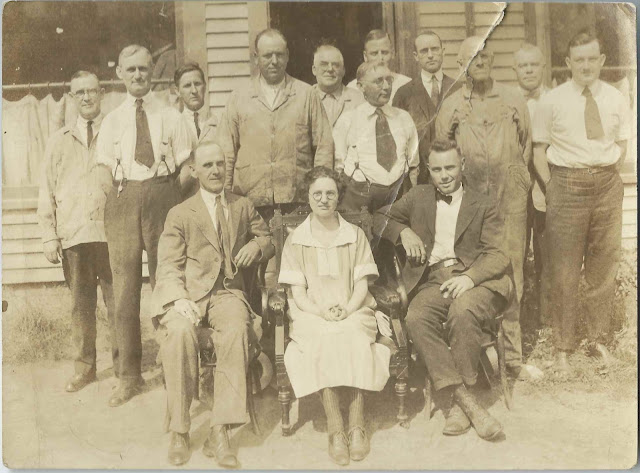 c 1935 photograph of what appears to be a group of employees: 13 men and one young woman, identified as Lucile Elizabeth McClintock, who was born at Fairfield, Maine, in 1915.

Since one of the men is identified as Leon Haines, seated at right, the venue may have been a woolen factory owned or operated by the Haines family, perhaps at Hartland, Maine, where Haines was superintendent, or perhaps at Fairfield, Maine.

Interestingly, a Roger Williams was bookkeeper for a woolen mill at Hartland, Maine, and that name also appears as one of the group.  Haines and Williams may also have had something to do with the woolen mill at Fairfield, Maine.

Lucile may have been a summer or part time employee during her high school career or during breaks from classes at Colby College, before she entered the teaching field.  If she was working at a woolen mill in Hartland, it would have been about 30 miles from her home, but perhaps she boarded there during the summer.

Identification on the reverse of of mostly just surnames: 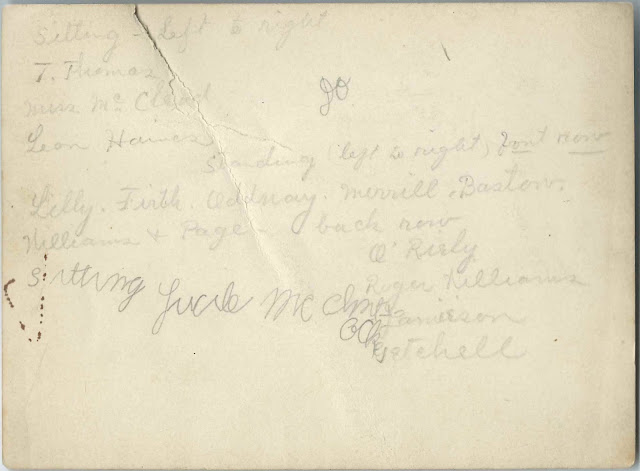 Lucile Elizabeth McClintock was born September 23, 1915 at Fairfield, Maine, the daughter of Charles W. McClintock and Isadore (Whitten) McClintock.  Lucile graduated from Colby College in the Class of 1938.  By 1940, as noted on the 1940 Census form for Fairfield, Maine, she was living with her parents and teaching at a public school.

The photograph was found with others, including some of Lucile as a child and as a young woman, and one of Captain Murray Alexander Coker, who attended high school at Fairfield, Maine, and then Colby College.  Other surnames in the collection - though I don't know if any of the other photographs have a connection or not: Parker, Swindell, Strout, Hinkley, Starbird.

If you recognize any of the faces and/or the surnames of the people in the photograph above, please leave a comment or contact me directly.