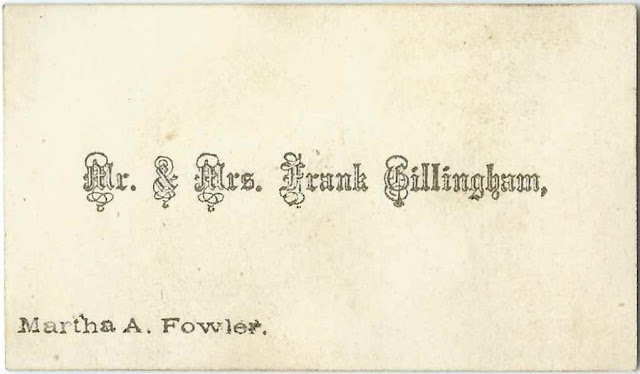 Martha Amariah (Fowler) Gillingham was born January 29, 1852 at Newbury, New Hampshire, the daughter of John Cheever Fowler and Martha Jane (Morse) Fowler, according to an entry on page 393 in Genealogy of the Descendants of John White of Wenham and Lancaster, Massachusetts : 1638-1900.  Martha died in 1929 at Mansfield, Massachusetts, perhaps while living with her daughter Mary Zipha (Gillingham) Sawyer and husband Frank R. Sawyer.

Benjamin Franklin Gillingham, "Frank", and Martha Amariah (Fowler) were married at Concord, New Hampshire, on January 9, 1874 and farmed at Newbury, New Hampshire, where they raised at least two children, John and Mary Zilpha.