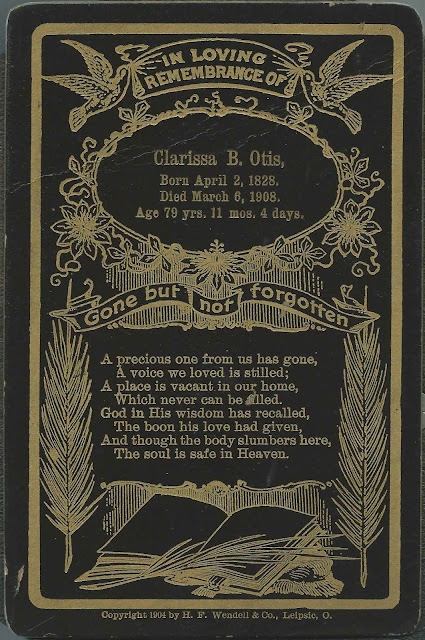 Clarissa was born April 2, 1828 in New York and died March 6, 1908 in Kansas.  Before moving to Decatur County, Kansas, the Otis family had lived for a while at Raritan, Illinois.

Leander Vanness Otis died not long after his wife, on November 19, 1908.  They're buried in the Shibboleth Cemetery at Dresden, Kansas, along with some of their children.

I found Clarissa's maiden name in a listing of Decatur County, Kansas, marriage records, one of which  was for the marriage of one of her daughters, whose name was shown as "Unreadable", but was presumably  Mary Ida Otis, who married Joshua A. Amlin.  Note:  The record shows Joshua's surname as Aurlin, but his stone and other records show Amlin.

If you have more information on Clarissa (Bull) Otis or Leander Vanness Otis, please leave a comment or contact me directly.

Posted by Pam Beveridge at 9:22 AM