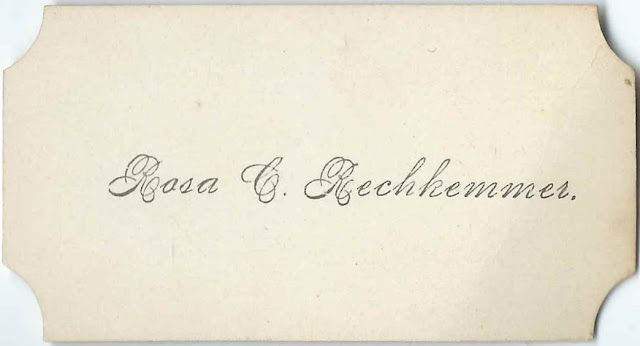 Calling card of Rosa C. Rechkemmer; nothing on reverse.

The card presumably dates from the late 19th century.  Researching online, I several possibilities for Rosa Rechkemmer, or variant spellings.

The most intriguing possibility I found is Rose Christine Rechkemmer, who was born in 1859 in Iowa, daughter of John Rechkemmer and Johanna (Hoenig - spelled various ways) Rechkemmer of Fairbank, Iowa.  Rechkemmer is also spelled several ways throughout records, including Rechekemmer, Rechkerner and Bechkemmer.

This Rose married Otho Fayette Leonard in 1896.  They farmed in Iowa and had at least one child, daughter Lura.  Rose died in 1920 and Otho in 1944.  They're buried in the Fairbank Cemetery at Fairbank, Iowa.

If you have another possibility for the identity of Rosa C. Rechkemmer, please leave a comment or contact me directly.

Just in case, this card belonged to Rosa C. (Rechkemmer) Leonard: a map of Fairbank, Iowa and its cemetery

Posted by Pam Beveridge at 7:09 AM