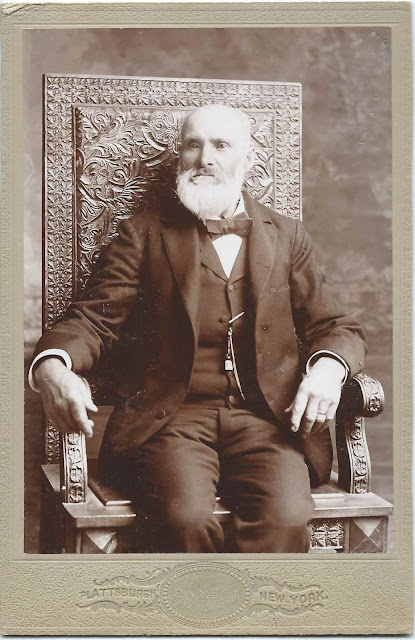 The cabinet photograph was taken by the Woodward studio of Plattsburgh, New York, and the Carte de Visite by Charles D. Holmes of the Boston Gallery of 405 Main Street, Worcester, Massachusetts. 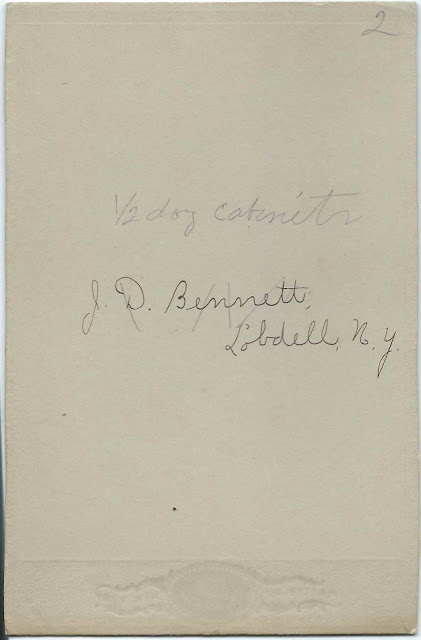 The children's parents were Effie Eva (Washburn) Bennett, a Worcester, Massachusetts, native, and Silas W. Bennett, son of Garrett Bennett and Orpha (Jeffers) Bennett of upstate New York.  Silas had an older brother Jefferson D. Bennett and a nephew Jeffers D. Bennett, son of Hialmer Bennett and Lucy Ann (Gilman) Bennett.  Silas also had a brother Justice, but I don't know his middle name and he went by "Jack", which is almost as easy to write as "J. D.".

Although most records show Silas W. Bennett as the son of Garrett Bennett and Orpha (Jeffers) Bennett, intriguingly, Silas' Massachusetts marriage record gives his parents as J. D. Bennett and Orphie.  Perhaps Jefferson D. Bennett had assumed the role of head of the family, upon the 1863 murder of his father Garrett.   Or maybe Garrett's name was actually Jarrett?

Hopefully a reader can shed some light on this mystery. 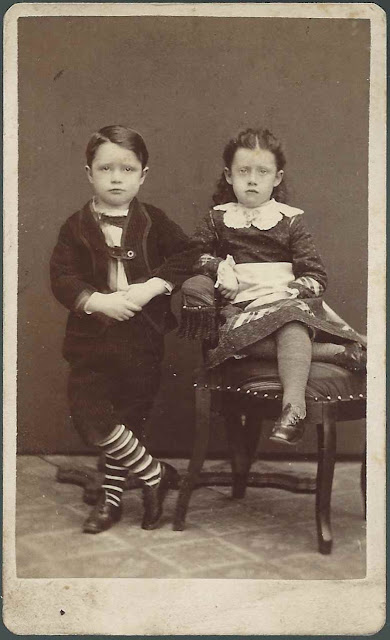 The reverse gives their birth dates, but I believe the year for Ornamn was off by three years, as I found a birth record for Lewis Ornamn Bennett for 1 January 1874. 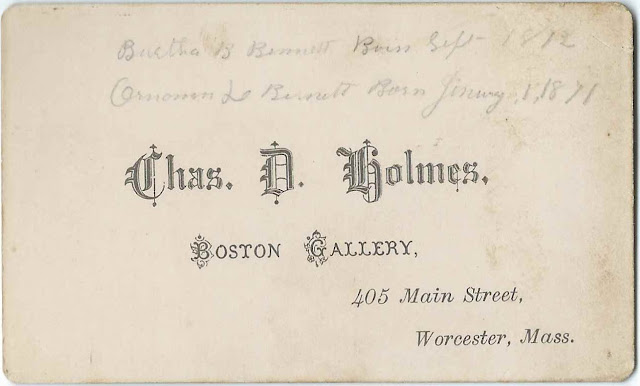 Bertha B. Bennett was born in September 1872 at Oxford, Massachusetts, and Ornamn L. Bennett, or Lewis Ornamn Bennett, on 1 January 1874 at Worcester, Massachusetts.  They were the children of Silas W. Bennett and Effie Eva (Washburn) Bennett.

Sadly Effie died, on 28 June 1874, just a few months after Lewis Ornamn's birth.  By 1880, the children were boarding in the Davison household at Spencer, Massachusetts.  Hopefully they saw their father as his work permitted.  Silas married again about 1880, to Frances Davison - perhaps related to the family boarding his children - but I believe they divorced at some point before the 1900 Census.

Bertha B. Bennett married Guy Horace Bateman, son of William and Abbie Bateman, on 27 August 1890 at West Springfield, Massachusetts.  Bertha died in 1936 and Guy in 1945.  They're buried in the Corbin Cemetery at Dudley, Massachusetts.

If you have more information on the Bennett and Washburn families, please leave a comment or contact me directly.