Sheet music for O Men! Awake! with words by Mrs. Beulah R. Nealey and music by Luther A. Clark.  They were Beulah M. (Rhodes) Nealey and Luther Augustin Clark, both residents of midcoast Maine.

Beulah wrote a book of poetry in 1944.  In addition to his many compositions, Luther wrote "How to Write a Song Poem (In Three Complete Lessons)" in 1937. 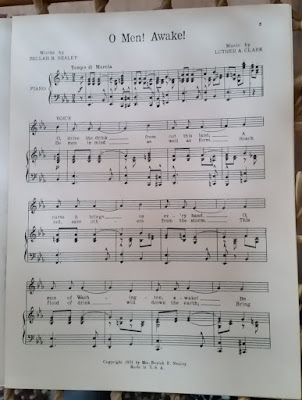 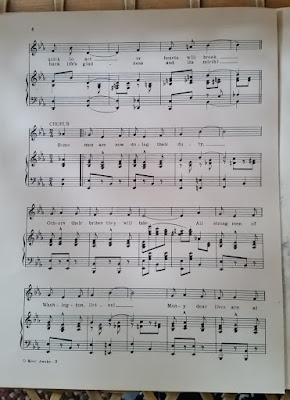 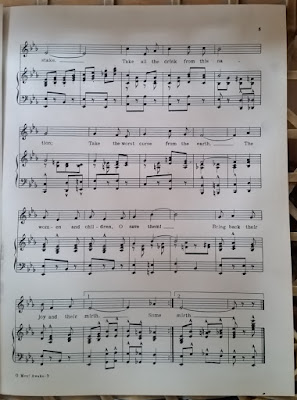 From brief online research, hopefully correct:  I found conflicting information on both Beulah and Luther, so take the information below with a grain of salt - corrections, clarifications and additions most welcome!

Beulah M. (Rhodes) Nealey was born October 8, 1882, I believe in Waldo County, Maine, the daughter of Franklin A. Rhodes and Lucy Ann (Merrithew) Rhodes.  Beulah was raised at Northport, Maine.  On September 30, 1911 at Northport, Beulah married Walter Russell Nealey, or Nealley, son of John Byron Nealey and Delia May (Bowden) Nealey.  Walter was born at Alton, Maine, on November 14, 1891.

Beulah died in 1963 and is buried at the Saturday Cove Cemetery at Northport, Maine.

Luther Augustin Clark was born February 12, 1879 at Rockland, Maine, the son of Luther Clark and  Margaret A. (Wooster) Clark.  On April 26, 1906 at West Rockport, Maine, Luther A. married Lilla C. Gould, daughter of Oscar F. Gould and Lizzie (Michaels) Gould.  Lilla was born November 1, 1887 at Camden, Maine.  Luther A. and Lilla made their home at Rockport and Thomaston, Maine.  They had at least one child, son Aaron Augustin Clark, born in 1907.

Luther Augustin Clark died December 31, 1940.  Lilla married Clarence Woodard Bowley in 1949 and Lewis C. Emery in 1953.  She died in 1966 and is buried with Luther in the West Rockport Cemetery at West Rockport, Maine.