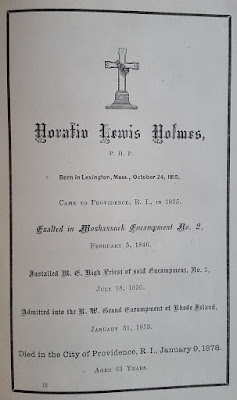 Memorial page for Horatio Lewis Holmes, included in the 1878 Proceedings of the Annual Session of the Right Worthy Grand Encampment of Rhode Island for the Independent Order of Odd Fellows. 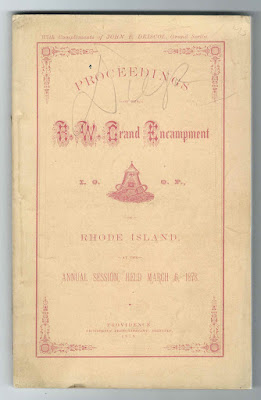 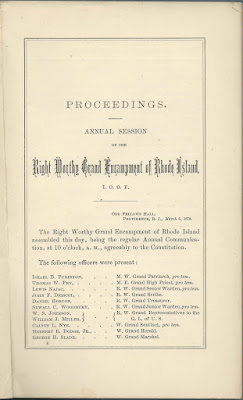 Text of the Memorial page dedicated to Horatio Lewis Holmes:

From brief online research, hopefully correct:  [corrections and additions requested - found many inconsistencies and some of them repeated online]

The Brewster Genealogy, by Emma C. Brewster Jones, includes a Horatio Lewis Jones with a birth date and place of October 24, 1815 at Kingston, Massachusetts, son of Lewis Holmes, Sr., and Sophia (Holmes) Holmes.  Unfortunately, Emma has poor Horatio as dying on February 5, 1842, the same death date as that of his first wife Mary Gladding Holmes, despite the fact that Emma also notes that Horatio married his second wife Nancy Hardenbeurg on November 25, 1845.   Horatio's death date of January 9, 1878 is correct, according to multiple sources.

Consequently, what I've determined is that Horatio Lewis Holmes was born at Kingston, Massachusetts, on October 24, 1815, the son of Lewis Holmes and Sophia (Holmes) Holmes.  According to the Brewster Genealogy, on September 30, 1840, Horatio married Mary Gladding of Providence, Rhode Island.  Mary died on February 5, 1842.  I don't know if Horatio and Mary had children or if Mary died in childbirth.  Also according to the Brewster Genealogy,  Horatio married Nancy Hardenbergh of Providence, Rhode Island, on November 25, 1845.  Horatio and Nancy had, I believe, at least two children, one of whom died in infancy.

According to an 1870 report of the Board of Water Commissioners of Providence, Horatio was hired at an annual salary of $1500 to inspect the city water pipes.  Horace and his brother-in-law Fayette Hardenbergh received a patent in 1877 for a top-roll support for spinning machines.

Horatio and his two wives are buried at Swan Point Cemetery at Providence, Rhode Island.

Posted by Pam Beveridge at 8:51 AM