1879-1883 Autograph Album of Lillie K. Hopkins of Fort Fairfield, Maine, Before and After her Marriage to William Henry Boynton 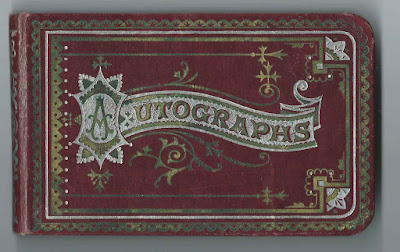 1879-1883 autograph album that belonged to Lillie K. Hopkins of Fort Fairfield, Maine, from before and after her marriage to William Henry Boynton, who presumably inscribed two pages, one before their marriage and one possibly after. 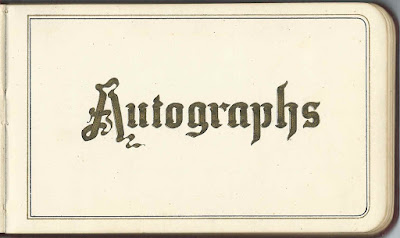 The album measures approximately 5-1/4 by 3-1/4 and contains the sentiments of about thirty of Lillie's relatives and friends.  An alphabetical surname list and an alphabetical list of the inscribers, together with any personal information they offered, appear at the end of this post.

It's likely that the H. J. Hopkins who inscribed a page in the album on March 4, 1883, was Lillie's mother Hannah Judith (Newhall) Hopkins. 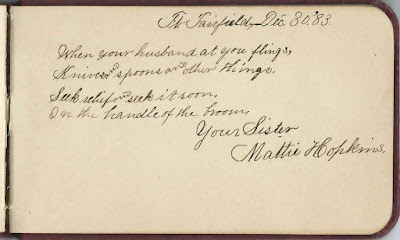 An inscriber named Sara indicated a cousin relationship with Lillie.  Sara inscribed her page on March 22, 1881 and may have indicated where she was when she inscribed it, but I can't make it out.  It's possibly Harvey, New Brunswick, in Albert County, or Hersey, Maine, in Aroostook County, but may be someplace else entirely, and perhaps the words do not connote a place at all.  If you have an idea who Sara was and where she lived, please leave a comment or contact me directly. 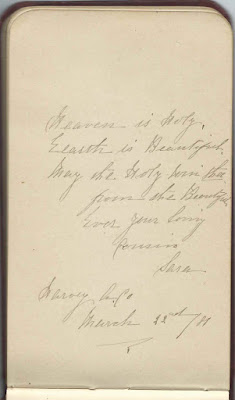 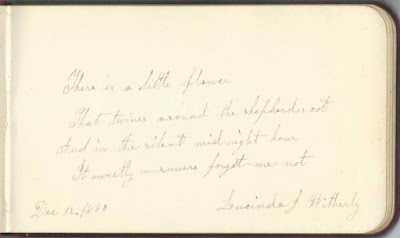 On October 2, 1881 at Fort Fairfield, Maine, Lillie married William Henry Boynton.  He was described as a Skowhegan farmer in a description of the Hopkins family in New England Families, Genealogical and Memorial, Volume 1, by William Richard Cutter, published in 1915.  William Henry Boynton, who was born August 6, 1856,  may have been the son of William Boynton, who died at Gettysburg in 1863, and Martha Elizabeth (Fairbanks) Boynton.

One page in the album was inscribed in 1879 by a Willie Boynton.  Another page, undated, was inscribed by W. H. B., who may have been William Henry Boynton and who may have inscribed the page after their 1881 marriage.  Additionally, there's a 1910 tax receipt for a William Boynton. 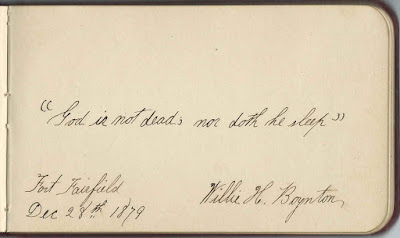 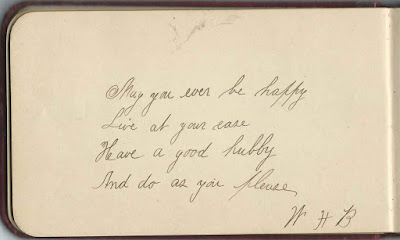 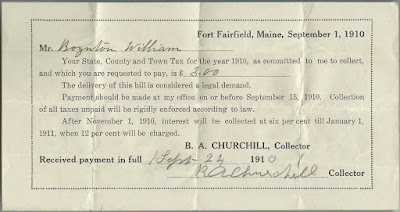 Lillie and William had two children:

Sadly, Lillie died November 8, 1886.  William then married Mary Ames (Hopkinson) Bolster, who was divorced from her husband, Elden M. Bolster, in February 1888.  Mary had a daughter Bessie from her first marriage, and she and William had, I believe, six more more children.

The 1900 Census notes that William and Mary had married about 1881, which is worrisome, and made me wonder if there are two men named William Henry Boynton.  However, it's possible that an informant and/or the enumerator was unaware of William's first marriage and was estimating his marriage with Mary by the age of his oldest child.

William and Mary eventually moved to California, where William died on November 7, 1942 in Ventura County.  Mary had predeceased him in 1939.

Posted by Pam Beveridge at 3:41 PM