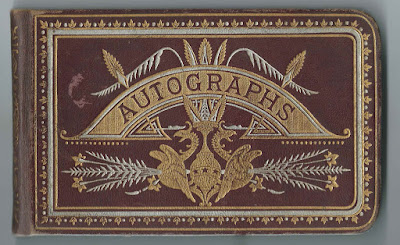 1879-1898 autograph album that belonged to an Addie from Sagadahoc County, Maine.  From two clues in the album, I believe she was Sarah Adeline Crocker, "Addie", who married Artell Hayward in 1884.

The album measures approximately 7-1/4" by 4-1/4" and contains the sentiments of 31 of Addie's relatives and friends.  An alphabetical surname list and an alphabetical list of the inscribers, together with any personal information they offered, appear at the end of this post. 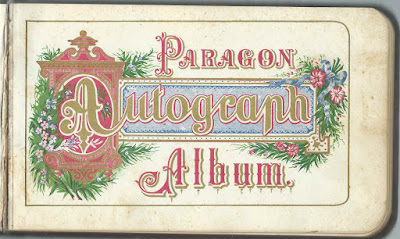 From brief online research, hopefully correct, and hopefully with the correct Addie:  [corrections and additions requested!]

On October 18, 1884 at Richmond, Maine, Addie married Artell Hayward [or Haywood], son of Israel and Mary (Trask, I think) Hayward of Jefferson, Maine.  Artell was born about April 1860 in Maine, presumably at Jefferson.  Artell, then living at Alna, Maine, inscribed a page in Addie's album on February 23, 1883. 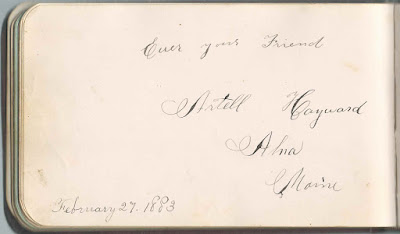 Addie and Artell lived at Woolwich, Maine, and had, I believe, seven children.  Below, their names and what information I could find:

Posted by Pam Beveridge at 2:47 PM