1866 Letter from Amos Smith at Norristown, Pennsylvania, to his Brother Timothy Smith at Turner, Maine 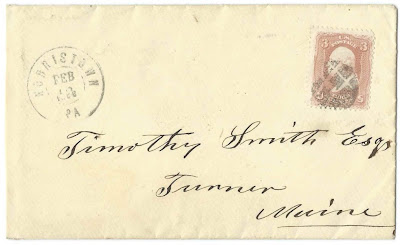 February 12, 1866 letter from Amos Smith at Norristown, Pennsylvania, to his brother Timothy Smith at Turner, Maine.  The letter consists of one sheet folded into four panes and contains family news. 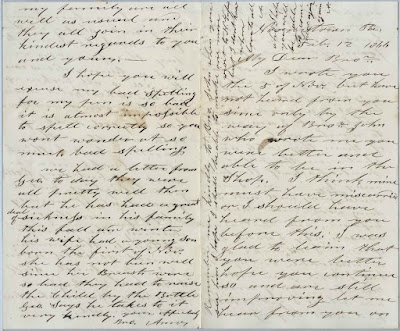 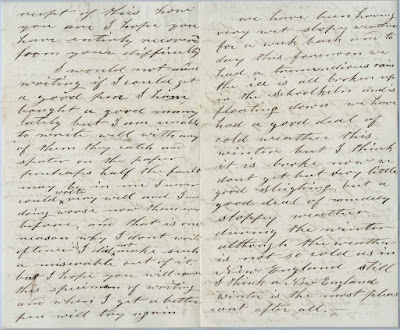 See a transcript of the letter at the end of this post.

Amos Smith was born December 16, 1797 in New Hampshire, the son of Caleb and Mary (Tuck) Smith.  His brother Timothy Smith was born January 27, 1801 in New Hampshire.  Mentioned in the letter is their oldest brother John Smith, who was born April 27, 1785.  Interestingly, there was a John Smith living at Norristown, Pennsylvania, at least at the time of the 1840 Census.

Amos married Eliza Young Littlefield in 1823; they had at least four children, I believe:
Amos Smith died a few months shy of his 100th birthday, at Philadelphia, Pennsylvania, on May 5, 1897 and is buried there in the Woodlands Cemetery.

In the letter, Amos mentioned his son George Littlefield Smith and family, then living at Prattsville, Alabama.  He revealed that George's wife, Abigail Flint (Holt) Smith, hadn't felt herself since the birth of her son Amos Littlefield Smith on November 2, 1865.  Fortunately, Abigail survived the ordeal and lived until 1914.

Timothy Smith died April 12, 1866 according to his gravestone and a partial recreation of a Maine death record, but many sources online have his death a year to the day later.  He's buried in the Turner Village Cemetery.

Transcript
Pane 1:
Norristown, Pennsylvania
February 12 1866
My Dear Bro.
I wrote you the 5th of November but have not heard from you since, only by the way of Bro. John who wrote me you were better and able to be in the Shop.  I think mine must have miscarried or I should have heard from you before this.  I was glad to learn that you were better, hope you continue so and are still improving.  Let me hear from you on
[End of pane 1 with a sideways note in the margin:  Remember me kindly to Bro. John when you see him.  I hope I shall be able to make one more visit to New Hampshire, but I don't know when.  Love to all.  A.  who I hope you will be able to come here again soon.  A.]
Pane 2:  receipt of this how you are.  I hope you have entirely recovered from your difficulty.
I would not mind writing if I could get a good pen.  I have bought a good many lately but I am unable to write well with any of them.  They catch and spatter on the paper.  Perhaps half the fault may be in me.  I never could write very well and I am doing worse now than ever before, and that is one reason why I don't write often,  I did not make such a miserable out of it, but I hope you will excuse this specimen of writing and when I get a better pen will try again.
Pane 3:  We have been having very wet sloppy weather for a week back and today this forenoon we had a tremendous rain.  The ice is all broken up in the Schoolkill [Schuylkill River], and is floating down.  We have had a good deal of cold weather this winter but I think it is broken now.  We don't get but very little good sleighing but a good deal of muddy sloppy weather during the winter, although the weather is not so cold as in New England.  Still I think a New England winter is the most pleasant after all.
Pane 4:  My family are all well as usual and they all join in their kindest regards to you and yours.
I hope you will excuse my bad spotting for my pen is so bad.  It is almost impossible to spell correctly so you won't wonder at so much bad spelling.
We had a letter from George today.  They were all pretty well then but he has had a great deal of sickness in his family this fall and winter.  His wife had a young son born the first of November.  She has not been well since.  Her Breasts were so bad they had to raise the Child by the Bottle.  George says he takes to it very kindly.  Yours affectionately,
Bro. A

Posted by Pam Beveridge at 1:13 PM