1867 Diary that May Have Belonged to Charles Edward Coker of Newbury, Massachusetts 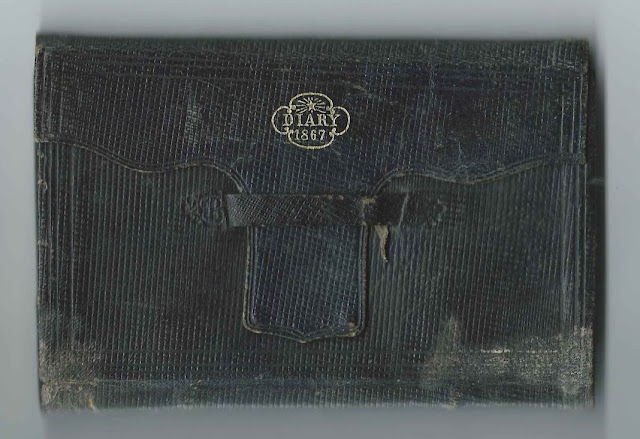 1867 diary that may have belonged to Charles Edward Coker of Newbury, Massachusetts.  His name appears in the Memoranda section, along with a name that appears to be F. G. Nason. 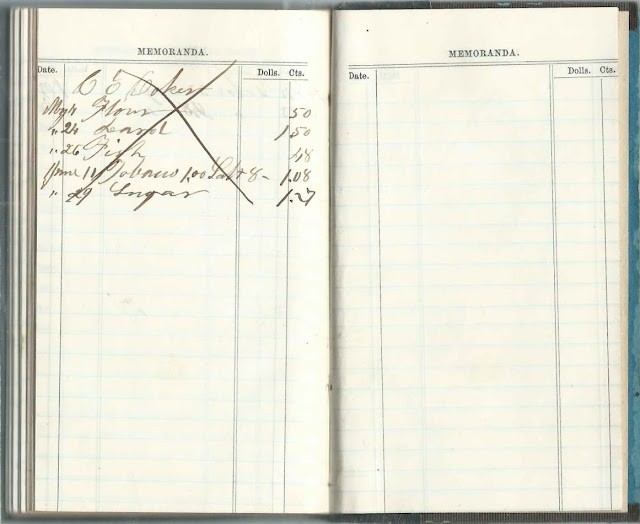 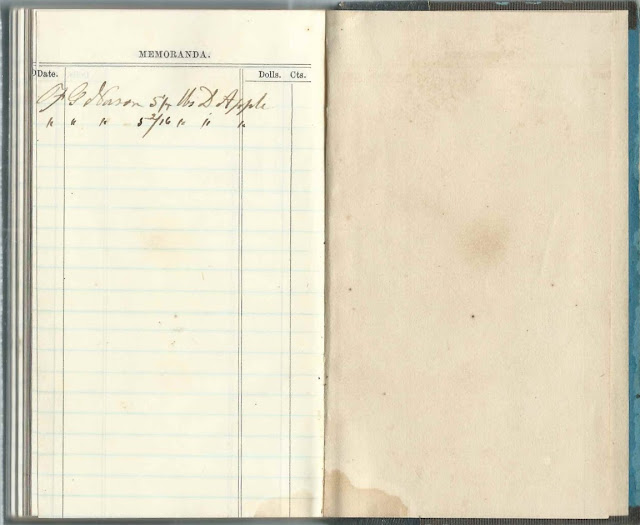 The diary measures about 4-3/4" by 3-1/4" and contains many pages of information, the diary section, a cash account section and two sections entitled Memoranda.   The entries consist almost entirely of laconic descriptions of weather conditions and trips to nearby towns and Boston, with countless trips to "NPort", Newburyport.  Sadly, there's no mention of celebrations of birthdays, Thanksgiving or Christmas, but there is mention of several people; see more details and images farther below. 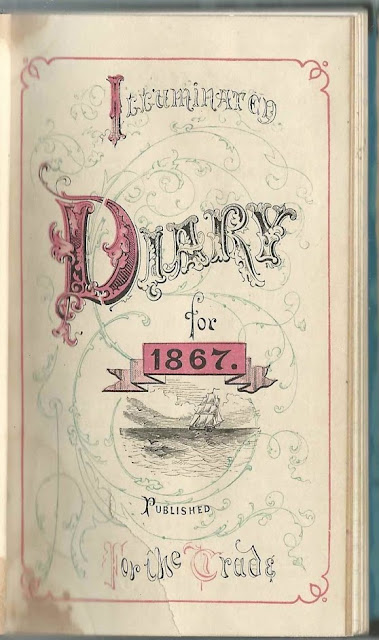 The owner was a farmer, but his many trips may indicate that he had other business interests as well.   He mentioned his salt marsh hayfields, which he mowed in the first half of August, the butchering of two hogs and the acquisition of a cow.

From brief online research, hopefully correct, and hopefully with the correct owner of the diary:  [corrections and additions requested!]

Charles Edward Coker was born April 1, 1830 at Alna, Maine, the son of Stephen and Harriet C. (Pearson) Coker.  In 1854, Charles married Sarah Jane Noyes, daughter of Daniel and Sarah (Pearson) Noyes.  Perhaps Charles and Sarah met because their mothers may have been related.

If you have more information on Charles Edward Coker, especially if you have found that he had salt marsh fields and had reason for frequent travel to Newburyport and Boston, please leave a comment or contact me directly.

The entry for Thursday, January 3, 1867, mentions the marriage of Giles Woodman and Amanda Rogers.  Giles was the son of Giles and Lydia (Floyd) Woodman; Amanda was the daughter of Pelatiah and Cordelia (Rogers) Rogers. 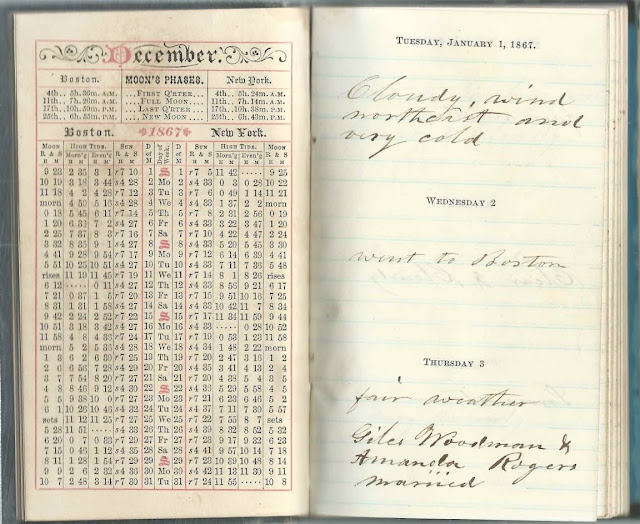 The entry for Tuesday, February 12, 1867 mentions the death of Thomas Rogers, who dropped dead while at work.  Thomas, born December 7, 1793 at Newbury, Massachusetts, was the son of Aaron and Lois (Rogers) Rogers. 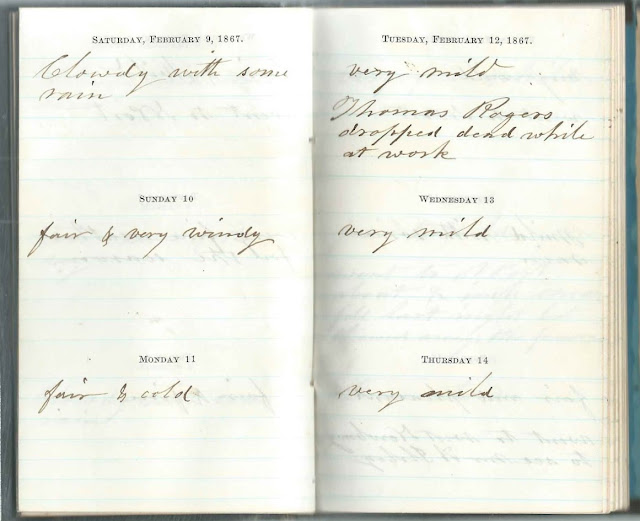 The entry for Sunday, February 17, 1867 mentions that the diary owner visited Mr. A. Ilsley at West Newbury, Massachusetts.  He was presumably Alfred Bradford Ilsley (1828-1868), son of Jonathan and Mary Goodridge (Bowley) Ilsley. 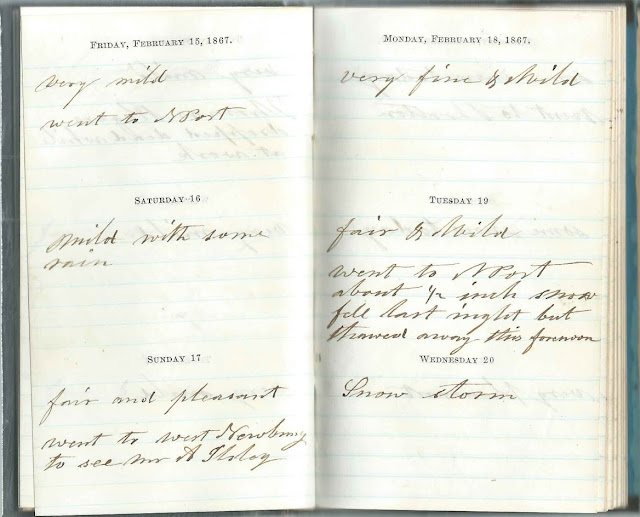 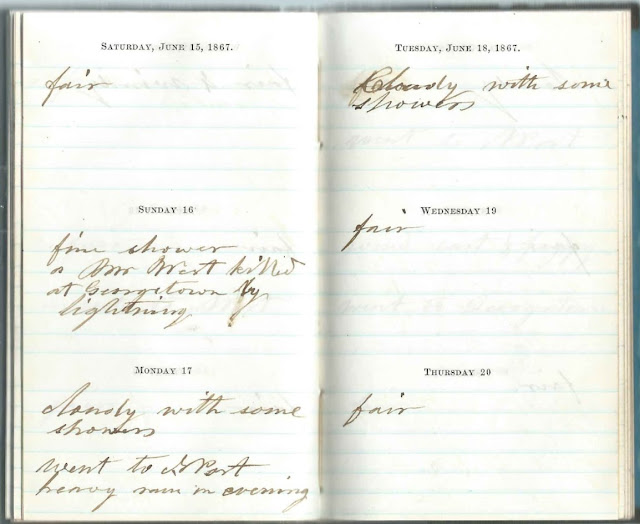 The entry of Wednesday, September 18, 1867 mentions a "great gathering on Salisbury beach by the people of Salisbury.  Interestingly, the Beach Road, which crossed the extensive marshes and gave access to five miles of beaches, was completed in 1866.  Perhaps this gathering was commemorating the anniversary of the road's completion. 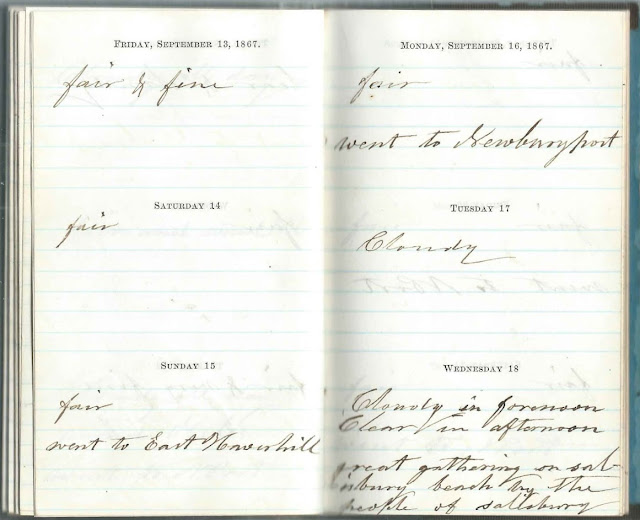 The Newbury area experienced a storm in mid January 1867 that prevented train access for a few days. 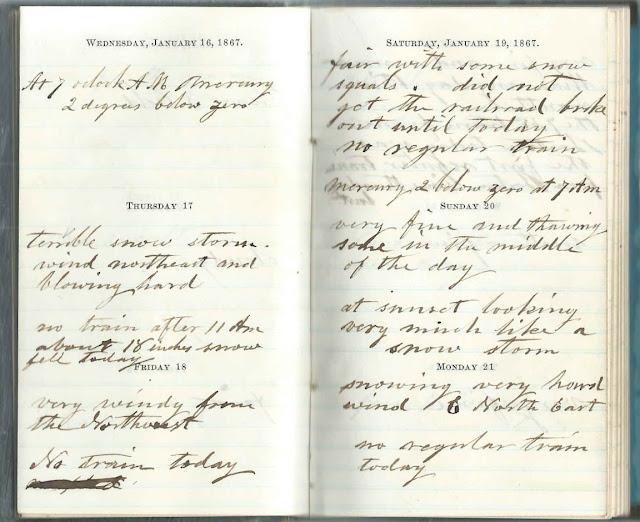 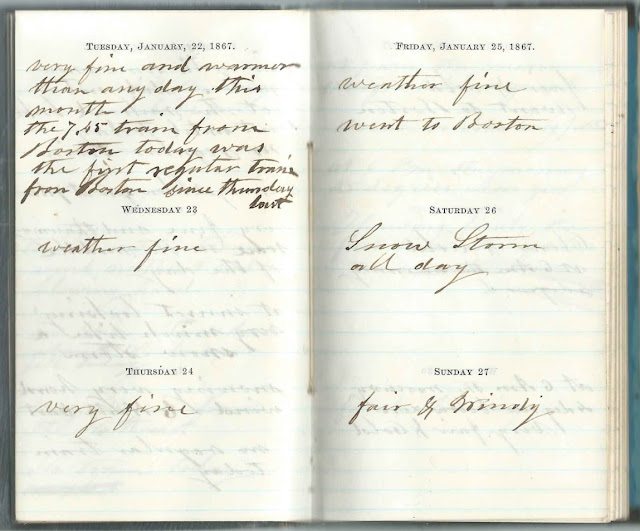 On Friday, March 1, 1867, the diary owner purchased a cow at Newton, New Hampshire, and led her home. 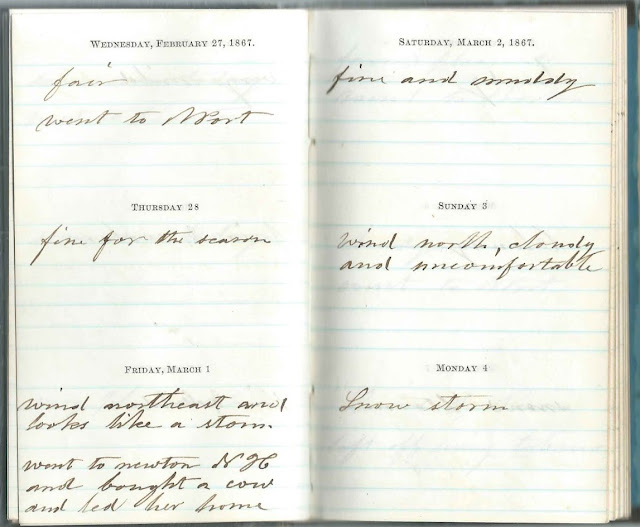 On Sunday, March 10, 1867, the diary owner indicated he had sworn off tobacco.   If indeed the diary owner was Charles Edward Coker, he may have taken up the habit again, as there's mention of a tobacco purchase in one of the memoranda sections; see the second image from top. 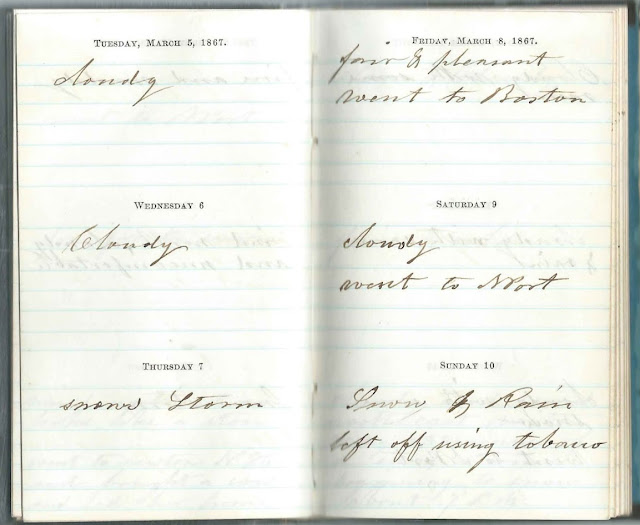 If you have corrections to the information above, a theory as to the diary owner's identity, or information on any of the people mentioned in the diary, please leave a comment or contact me directly.

Posted by Pam Beveridge at 7:50 AM