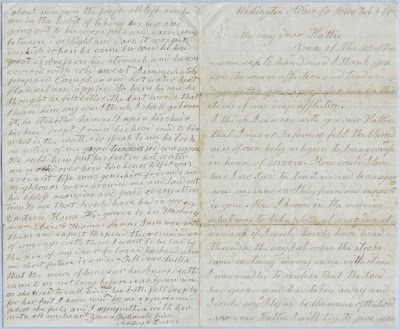 Letter, dated February 3, 1865, to Hattie from Nancy (Cook) Davis, wife of Reverend Increase Sumner Davis.  The purpose of the letter was to thank Hattie for her expression of sympathy and to give her an account of Rev. Davis' last days; he had died in November of 1864.

The letter is one sheet, folded into four panes.  [Click on an image to enlarge it.]  A transcription appears at the end of this post.

Nancy (Cook) Davis was born September 25, 1795 at Newton, Massachusetts, the daughter of Jonathan and Temperance (Whitney) Cook.  In 1818, I think on May 14, Nancy married Sumner Increase Davis, son of Ebenezer and Lucy (Aspinwall) Davis.  Sumner was born on May 6, 1797 at Brookline, Massachusetts, though I found another record having him born on the same day in 1796.  He was ordained a minister at Dorchester, New Hampshire, October 9, 1828.

I found an interesting description of Rev. Davis from The History of Middlesex County, Massachusetts, with Biographical Sketches of Many of its Pioneers and Prominent Men, Volume III, compiled by D. Hamilton Hurd and published in Philadelphia, Pennsylvania, in 1890 by J. W. Lewis & Co. 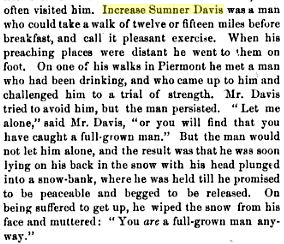 Nancy (Cook) Davis died November 25, 1884 at Washington, Iowa, and is buried with her husband and sons Ebenezer and Thomas at Witt Cemetery, Bridgewater, Iowa.

If you have corrections and/or additions to the information above, please leave a comment or contact me directly.  I'd like to know more about the Luella referenced in the letter.

Washington, Adair Co., Iowa, February 3, 1865
My very dear Hattie
Yours of the 25 of December came safe to hand and I thank you for the warm affection and tender sympathy you express for one in this time of my deep affliction.
I think I can say with you, dear Hattie, that I never before so felt the blessedness of our holy religion to bring comfort in hours of sorrow.  How could I live had I no God to trust in and lean upon now my dear earthly friend and support is gone.  Had I known in the morning what was to take place at evening it seems as if I could hardly have lived through the day, but when the stroke came sustaining mercy came with it and I was enabled to realized that the Lord had give and had taken away and I could say "Blessed be the name of the Lord".  Now, dear Hattie, I will try to give you some account of his last days and his sudden departure.
His health seemed remarkably good during the Autumn, had a good appetite for his food, seemed to have strength to do all his traveling.  The last time he attended his meeting five miles from where we lived he came home very much exhausted, so much so that I felt somewhat alarmed, but in the morning he said he felt rested and went on as usual.  The next Sabbath he preached at Neven from there words, "For the love of Christ constraineth us because we thus judge that if one died for all then we were all dead".  In the forenoon for the love of Christ constraineth us, and in the afternoon the remainder of the verse and it was a solemn day but it did not enter our minds that it was the last time he was to preach to us.  I propose singing Come saints, let us join in the praise of the Lamb, thus ended the last sabbath services of my dear beloved husband here on earth.  The next Thursday was our National Thanksgiving.  Nearly all the settlement came to our house, brought their provisions.  We had a religious meeting in the forenoon.  My dear husband read Dr. Hitchcock's sermon.  He was very much pleased with it, thought it better than anything he could produce and the people were willing he should, he seemed considerably affected while reading it.  The meeting done, our dinner was prepared, we set together at the head of the table.  O how happy not thinking that in a few hours the Angel of death was coming to take him away from us, but so it was about six in the evening.  His soul took its flight and went to the mansions of Bliss, prepared to be forever with the Lord.  about sundown the people all left and he was in the habit of taking his saw and going out to his woodpile and exercising between daylight and dark.  It was quite darkish when he came in, said he had great distress in his stomach and he was covered with cold sweat.  Immediately prepared Camphor and hot water heat, flannel and applied to him.  He said he thought he felt better.  The last words that I heard him say was "I think I shall get over it".  He stretched himself upon his chair, his head dropt.  I raised his head, said to him, "What is the matter, do speak to me".  He took no notice of me, gasped twice and was gone.  We rubbed him, put his feet in hot water, we worked over him two hours till it was evident life was gone.  His friends and neighbors were around me and laid out his lifeless remains and paid every attention to me that I could have had in my Eastern Home.  His grave is in Washington, near Eben and Thomas __ I am now with them and expect to spend the remainder of my days with them.  I want  to be laid by the side of my dear beloved husband when my short future is ended.  Tell dear Luella that the news of her dear husband's death came to us not long before dear Grandsire as she used to call him, died.  Love to both, felt deeply for her but I know now by sad experience what she feels and I sympathize with her with all my heart.  Your affectionate friend,
Nancy C. Davis

Posted by Pam Beveridge at 4:56 PM