1885/1886 autograph album that belonged to Nancy Coulter Thompson, "Nannie", of Greenwich, New York.  The album's ownership page implies that Nannie was given the album as a Christmas present in 1885, but there are some autographs earlier than that.

The album is approximately 5-1/2" x 3-1/4" and contains the sentiments of eleven of Nannie's relatives, friends and schoolmates.  An alphabetical surname list and an alphabetical list of the signers, together with any personal information they offered, appear at the end of this post.

This is a Kate Greenaway album with wonderful illustrations of young ladies interspersed throughout; it must have been a treat for Nannie and her well wishers.

Nancy Coulter Thompson was born at Greenwich, New York, on February 10, 1875 in New York, the daughter of James H. and Cornelia (Coulter) Thompson.  Nancy's date of birth appears in several records; her place of birth, hopefully correct, was listed on her husband's passport application.

Judging from the first signed page in the album, it was likely that Nannie's mother, Cornelia (Coulter) Thompson, gave the album to Nannie as a Christmas present. 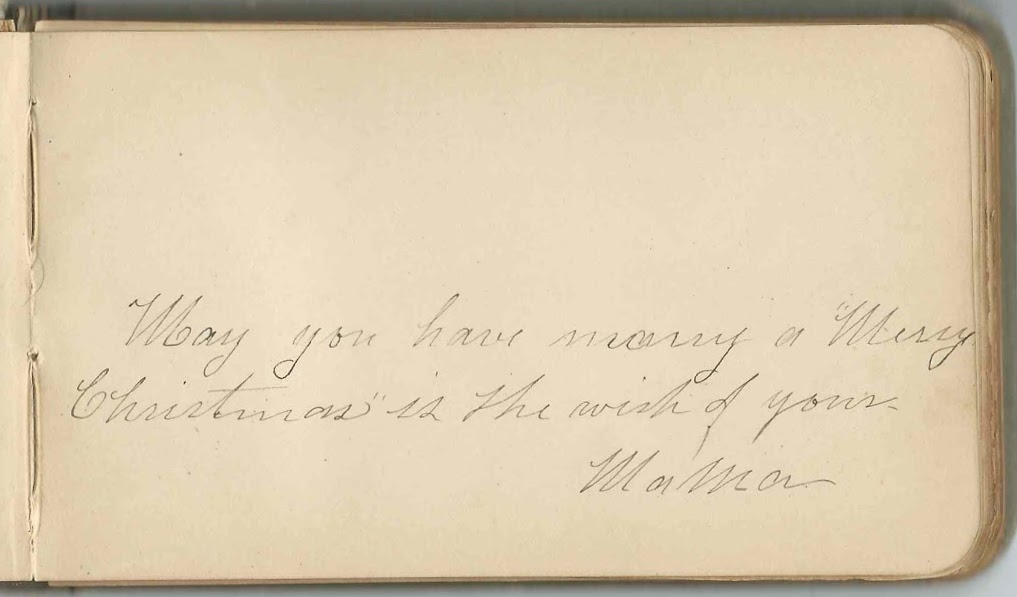 Nannie had a sister, Blanche D. Thompson, who inscribed a page on April 5, 1885.

Elise LaVake of Greenwich, New York, also chose one of the illustrated pages.

On October 28, 1903, Nancy Coulter Thompson married Charles Clark Van Kirk, who would become the presiding justice of the Appellate Division of the New York Supreme Court.  He was born September 1, 1862 at Greenwich, New York, the son of Joseph Norman Van Kirk and Kate (Conant) Van Kirk.  I didn't find any children for the couple in Census records.  Charles died in 1937, and Nancy in 1957.

A photograph on Charles' passport application shows the couple together.

Signers in the album  [Note: Given names within a specific surname may not be in alphabetical order.]