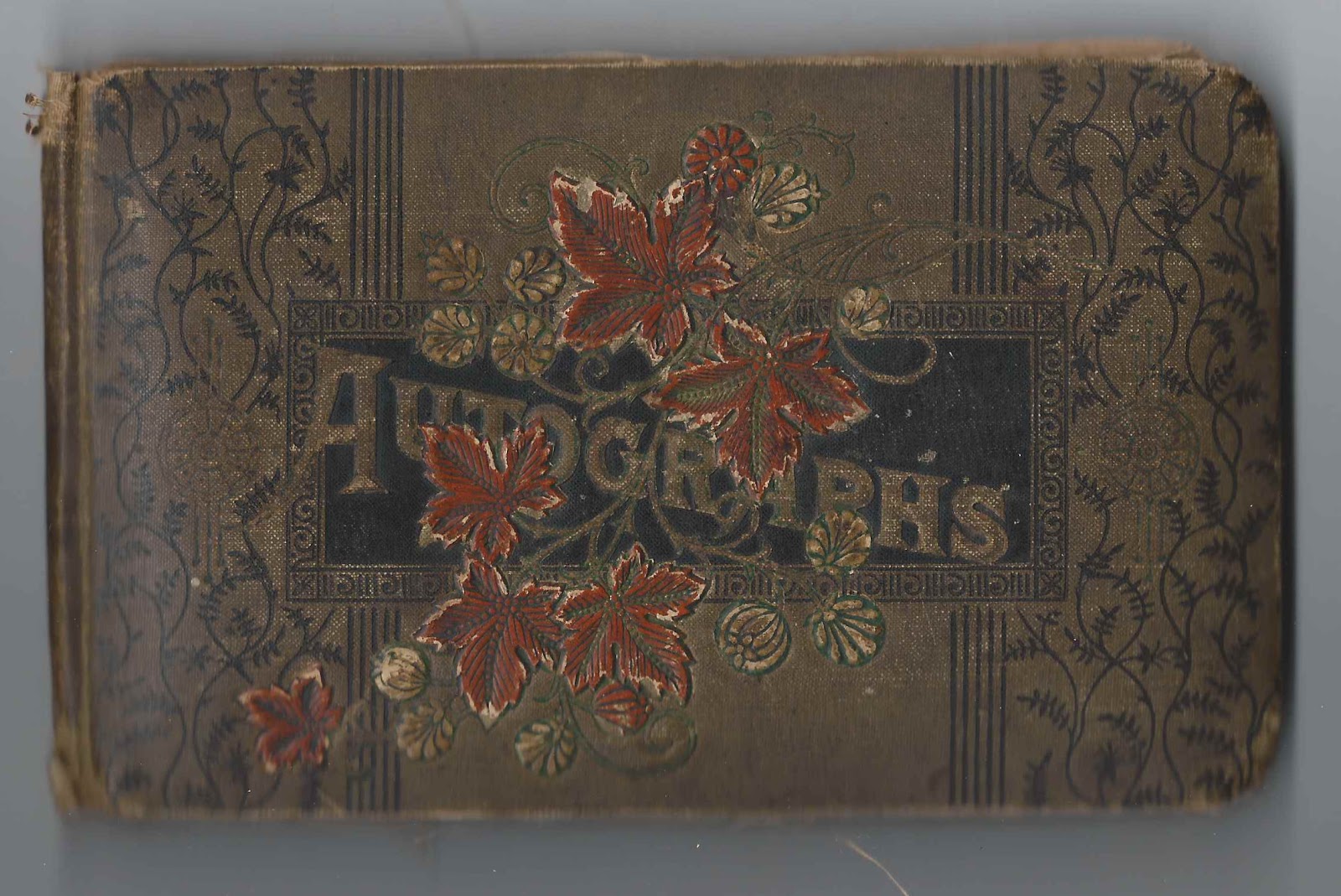 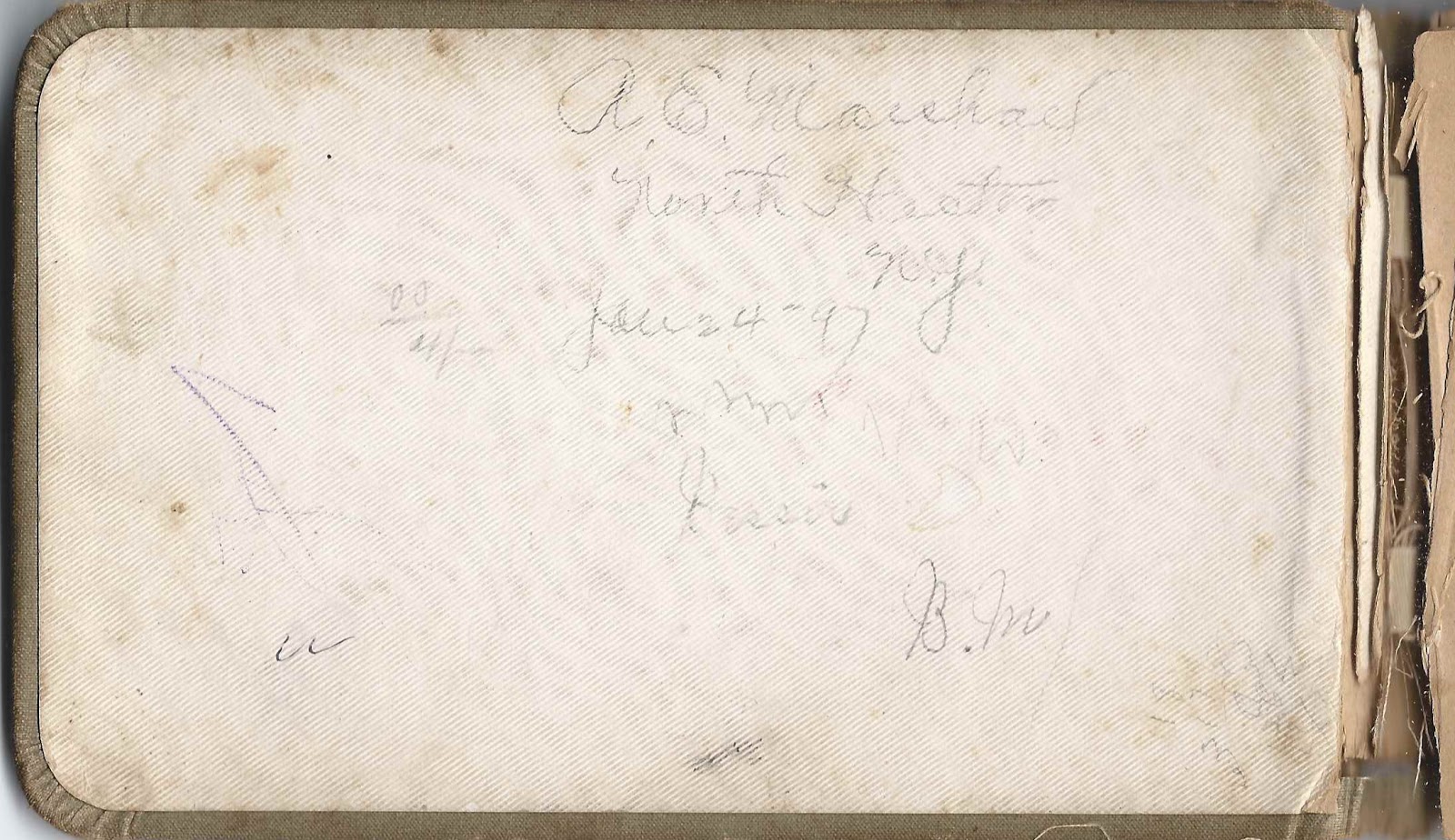 The album is approximately 7" x 4-1/4" and contains the sentiments of 25 of Robert's relatives, friends and schoolmates.  An alphabetical list of the signers appears at the end of this post.

Two people who expressed a relationship with Robert were siblings Edna M. Denmark and Harold Denmark, whose parents were Monroe and Addie Denmark of Elmira, New York. 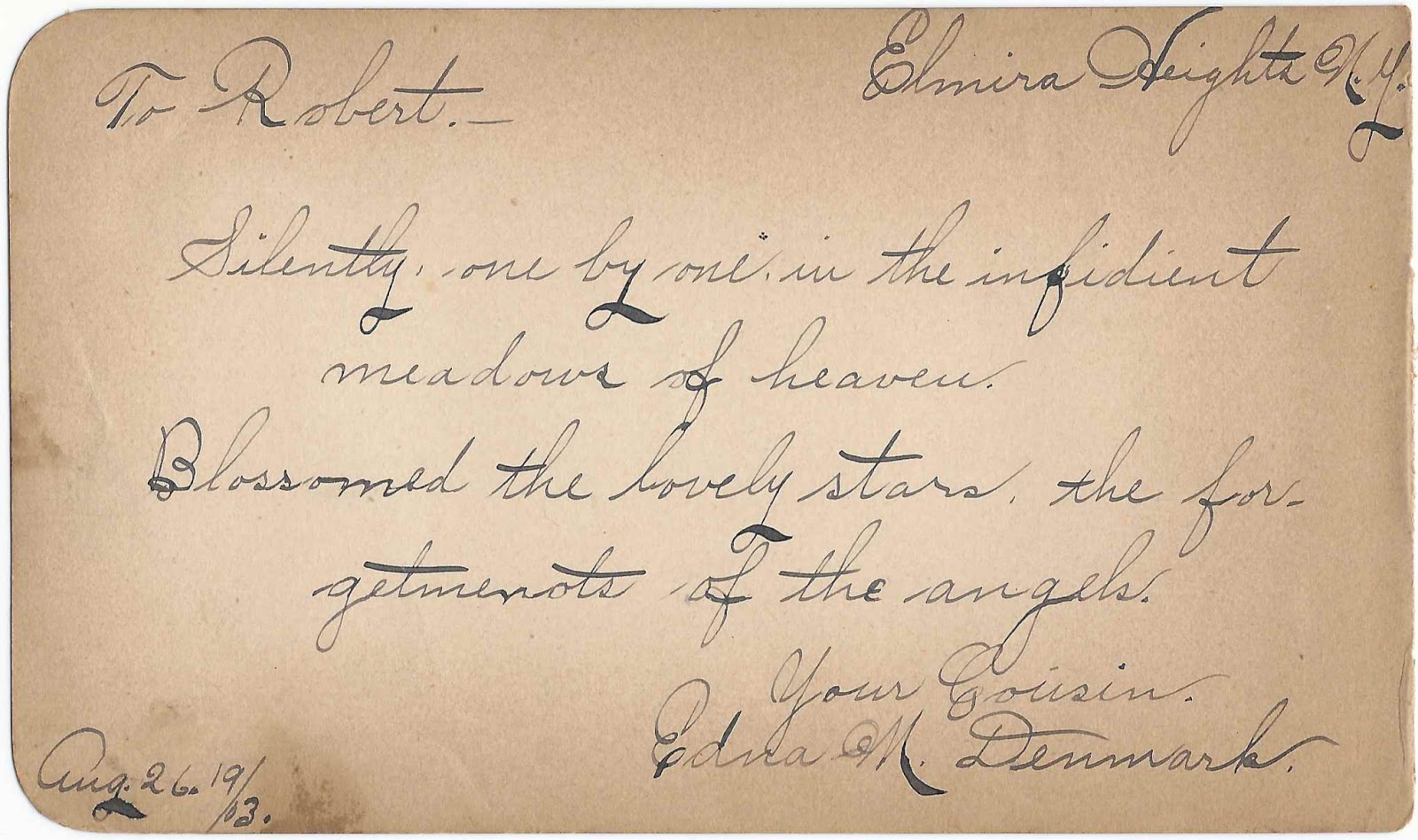 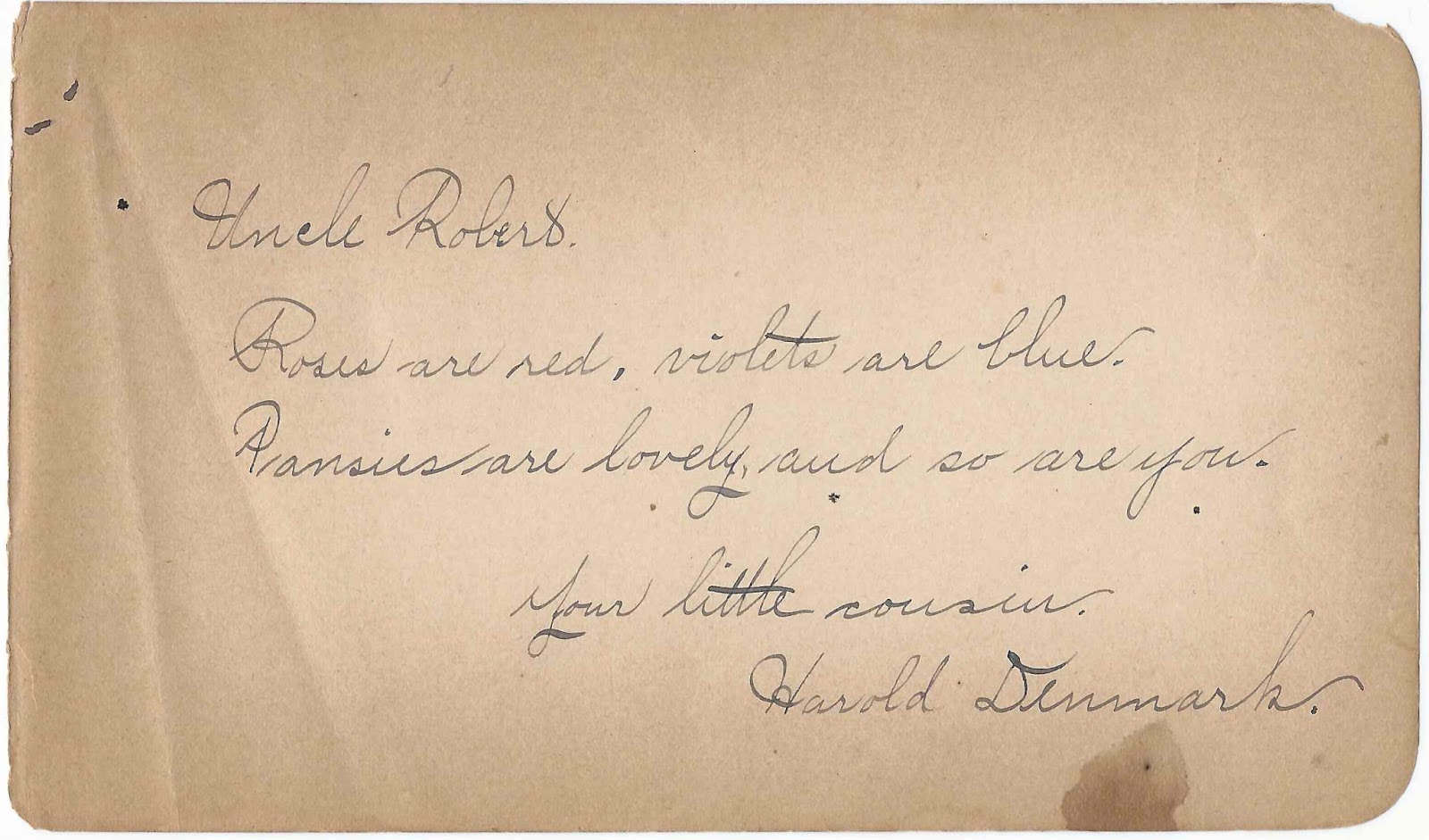 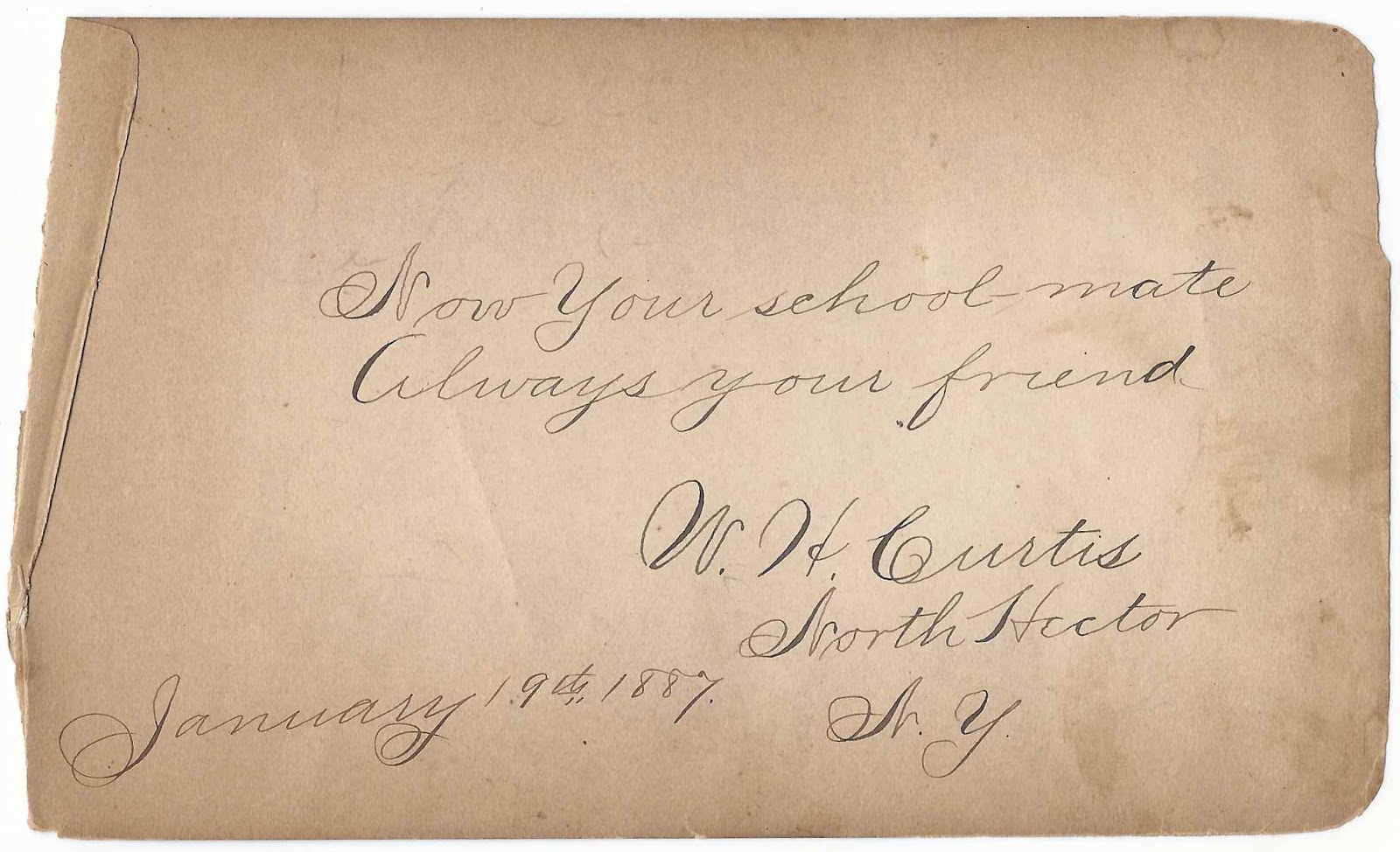 According to the Federal Censuses, the couple lived at Hector, Dix and Watkins Glen, all in New York, and they apparently lived at Valois, New York, for a time, as their children were born there.   Robert was a house carpenter.  They had at least three children, I believe:


Floyd David Marshall's name appears on two pages in the album, but they were apparently signed by someone else, presumably Robert or Fannie, as Flyd would have been too young. 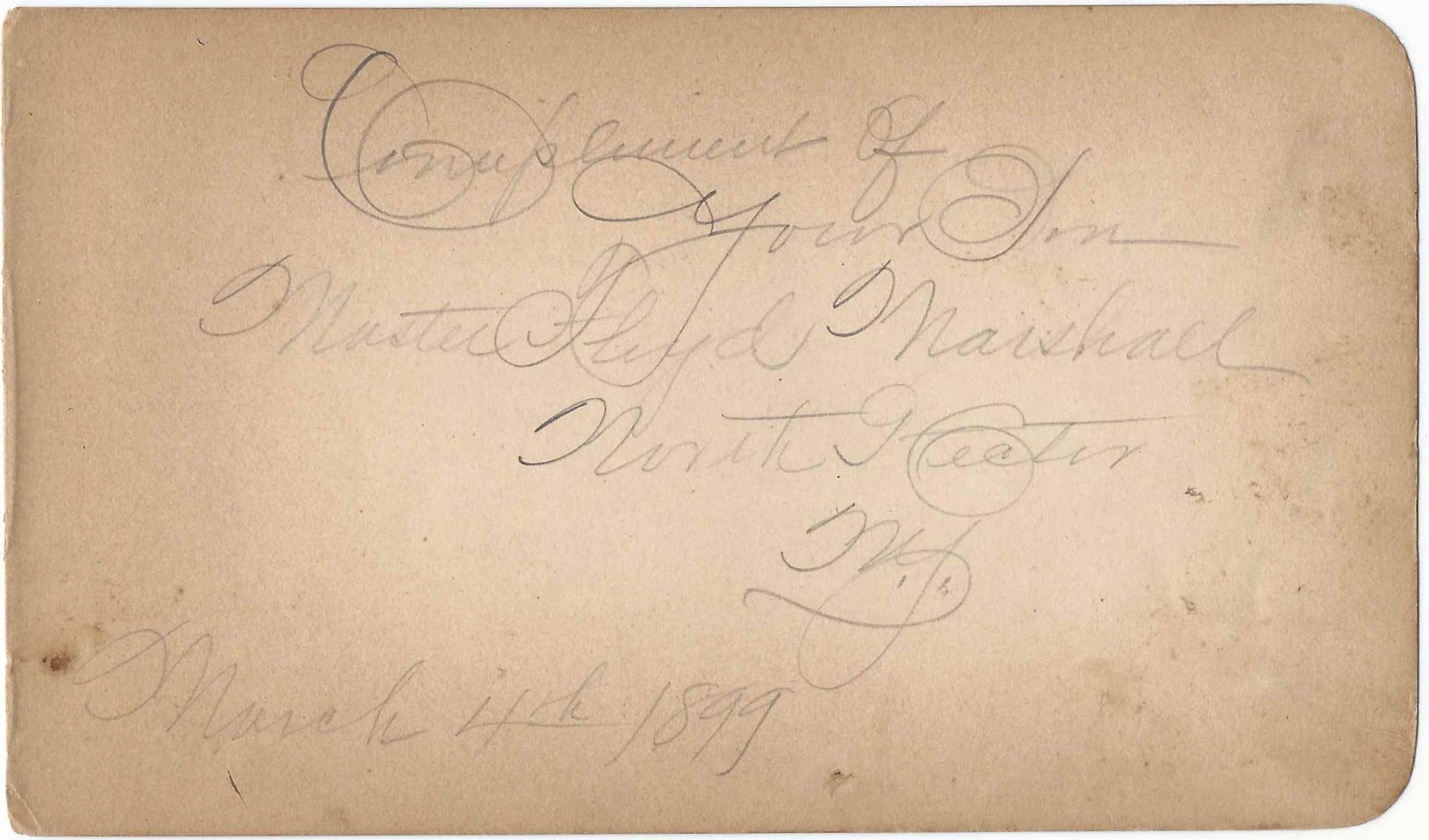 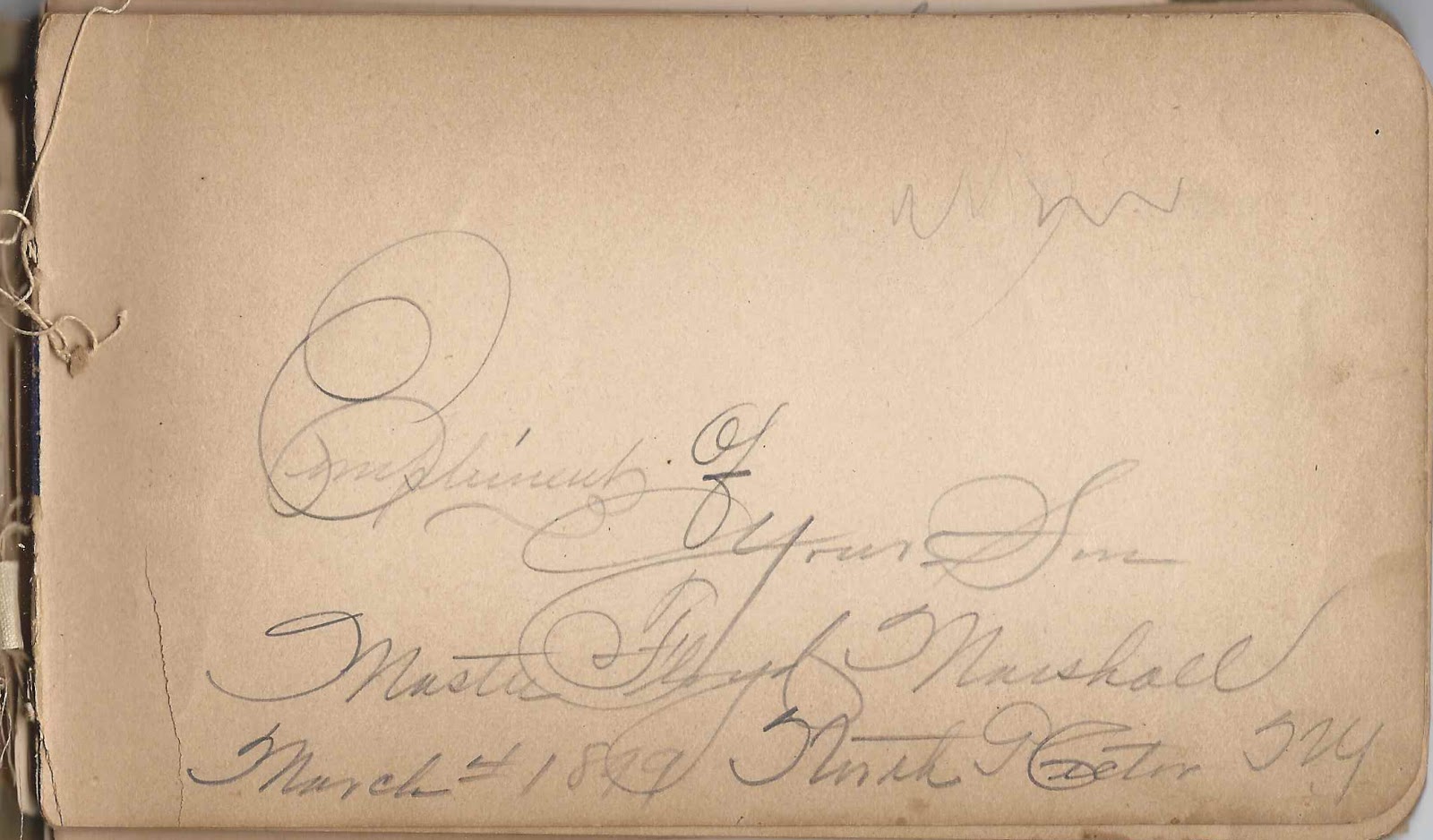 Someone also signed a page for Robert's daughter Bessie on April 27, 1901. 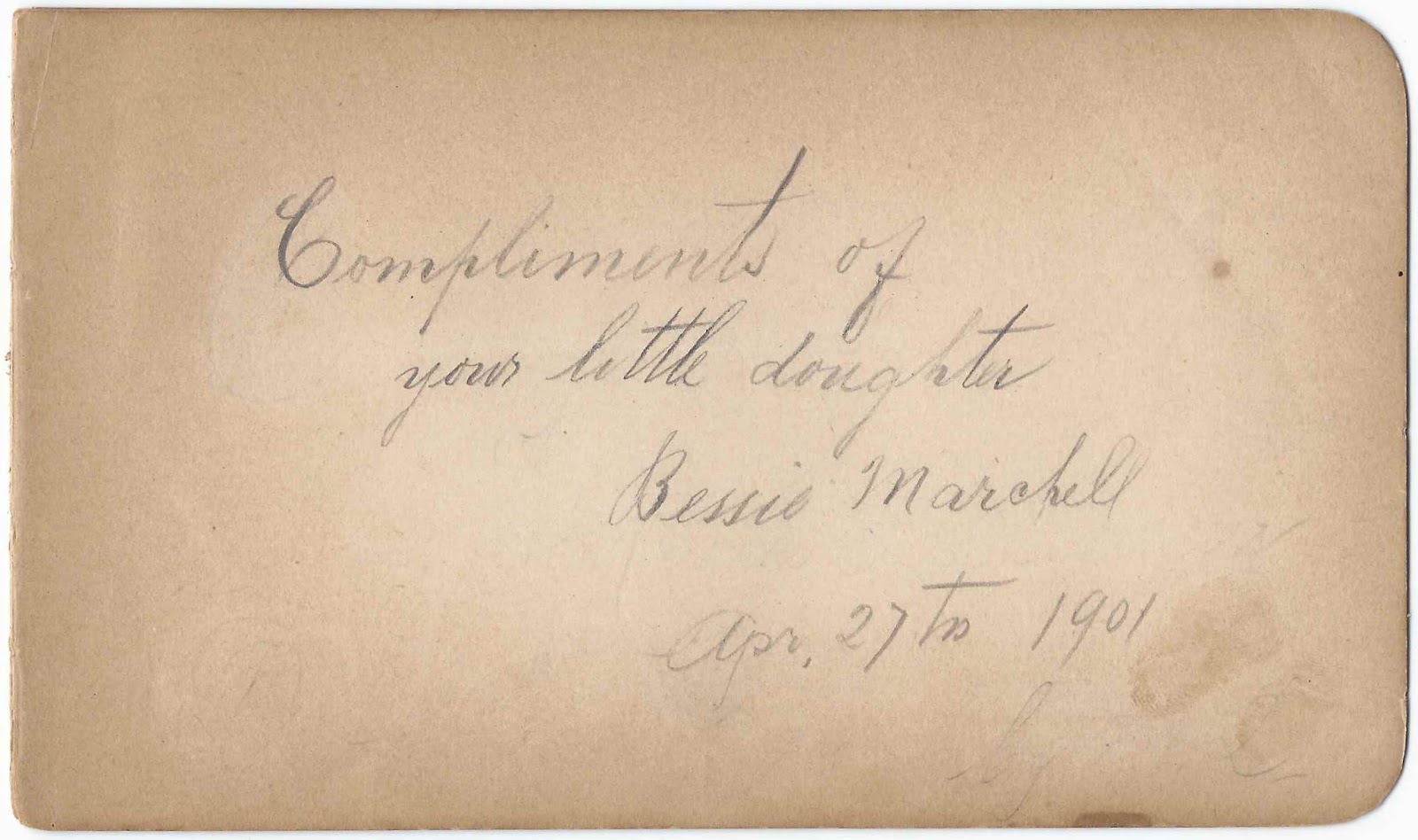 The page below contains the names of children, who may have been relatives or neighbors. 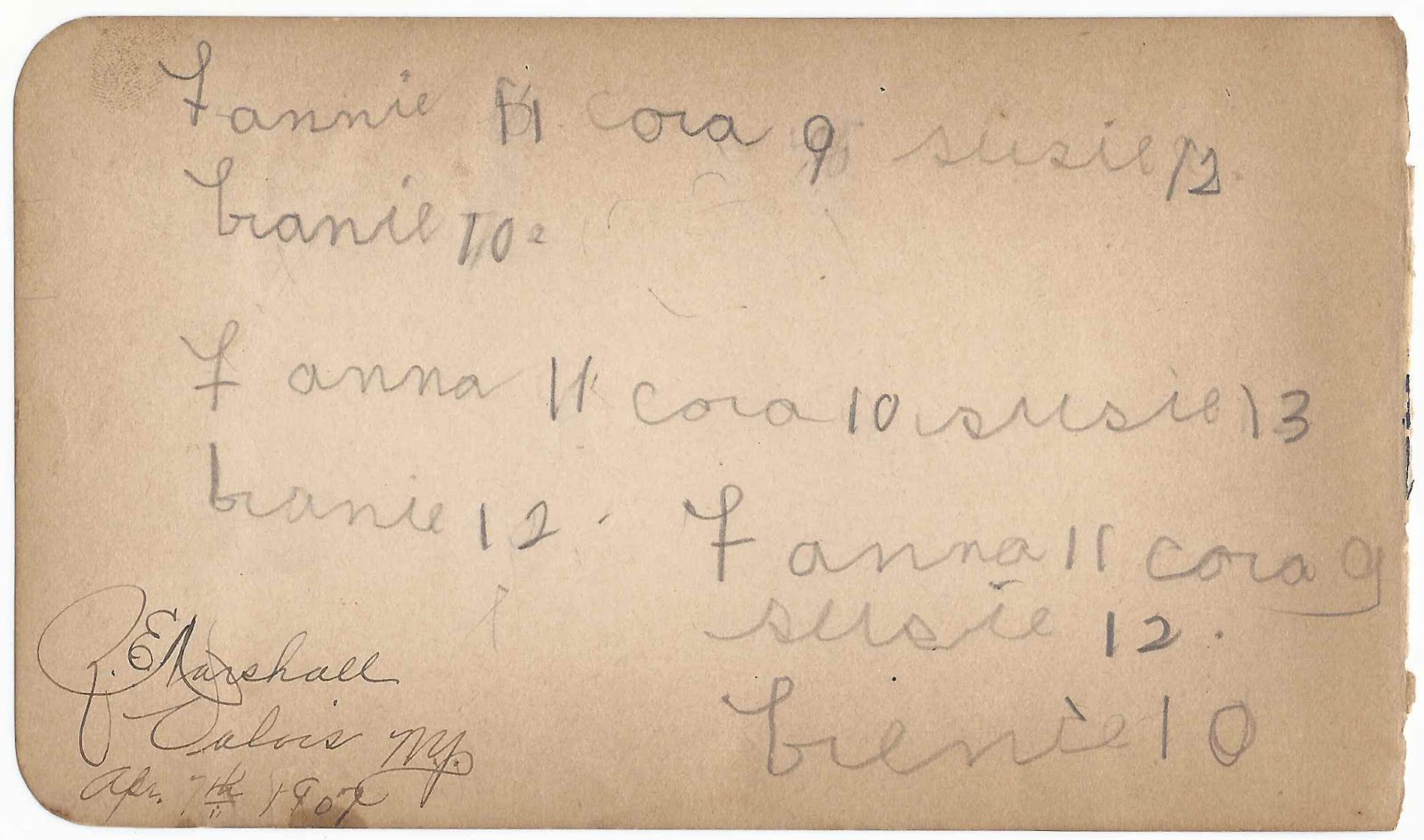 Two pages contained a note referring to the death of the signer.  W. R. Welding signed a page at North Hector, New York, on February 2, 1887.  He was Postmaster William R. Welding, who died at the age of 41 on April 8, 1894.  Someone, presumably Robert, added the note: "Dead". 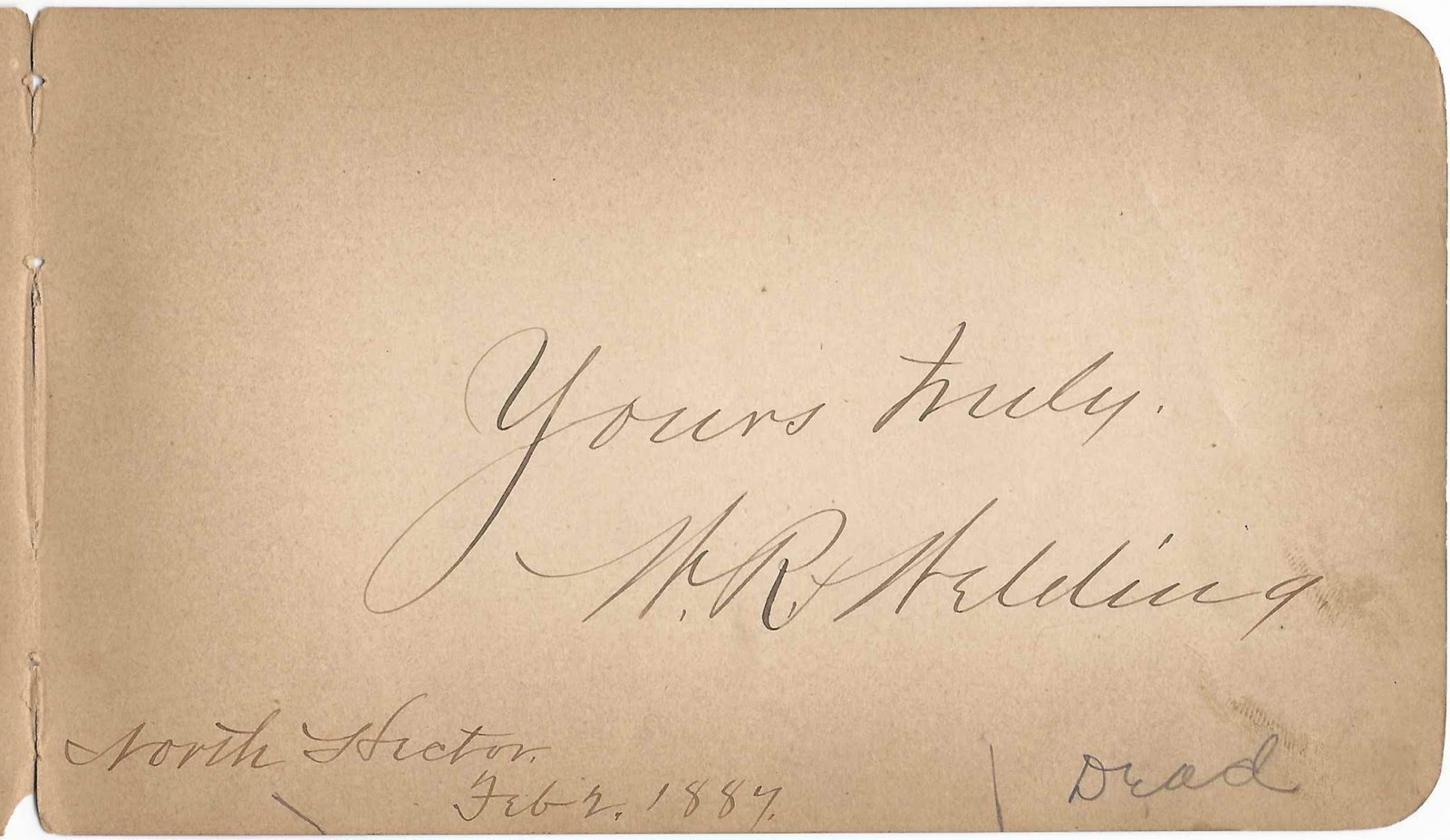 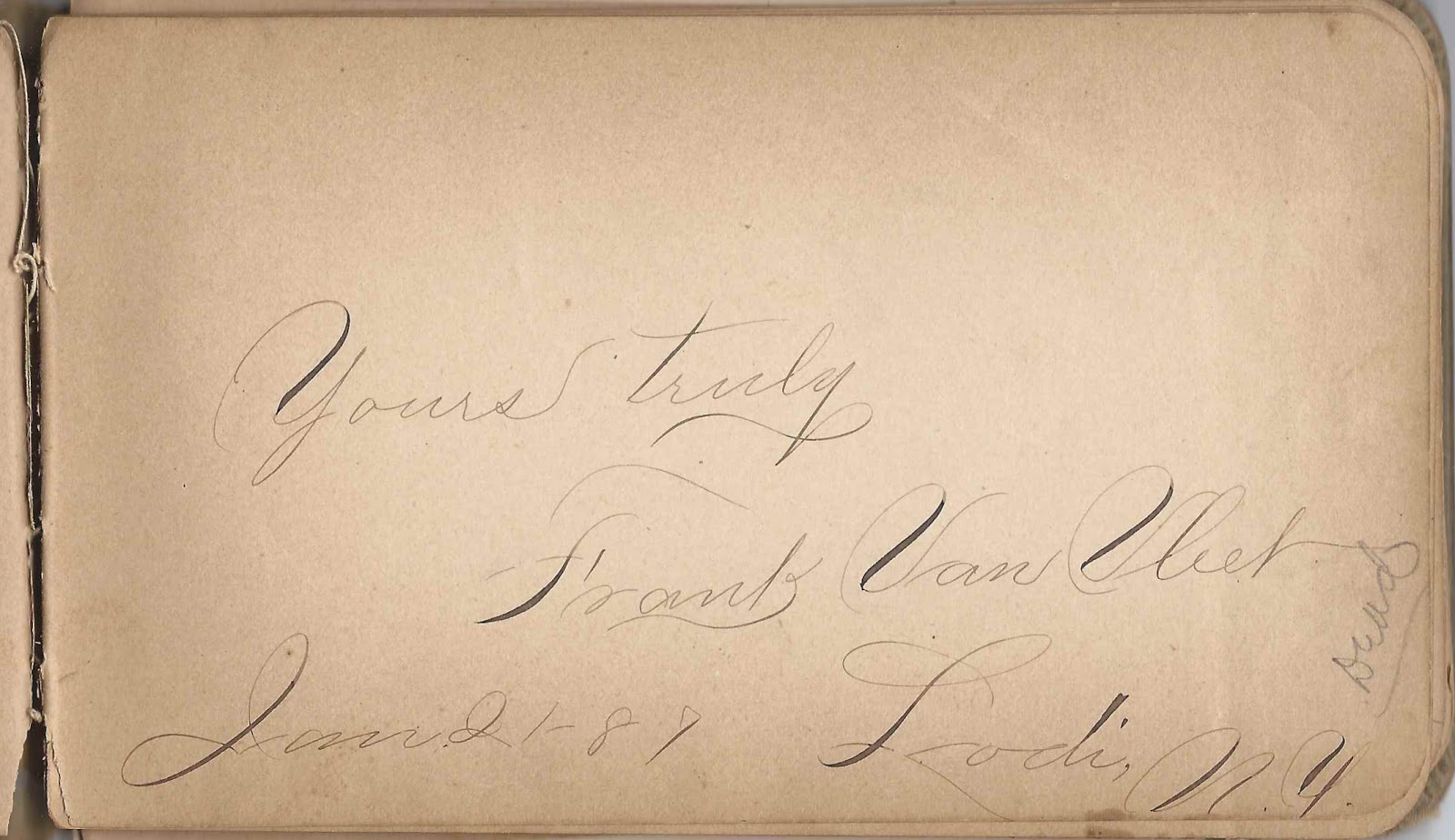 When purchased, the album came with some loose pages from a more contemporary album from the 1930s.  I don't know if the two albums have a relationship or not.  The pages were addressed to a Jane/Jayne from people with surnames of Wallenstein, Manger and an undecipherable one, possibly Hardi, and a page signed by "Cousin Barbara".