1876-1914 Autograph Album of the Merrill Family of Danvers and Danversport, Massachusetts 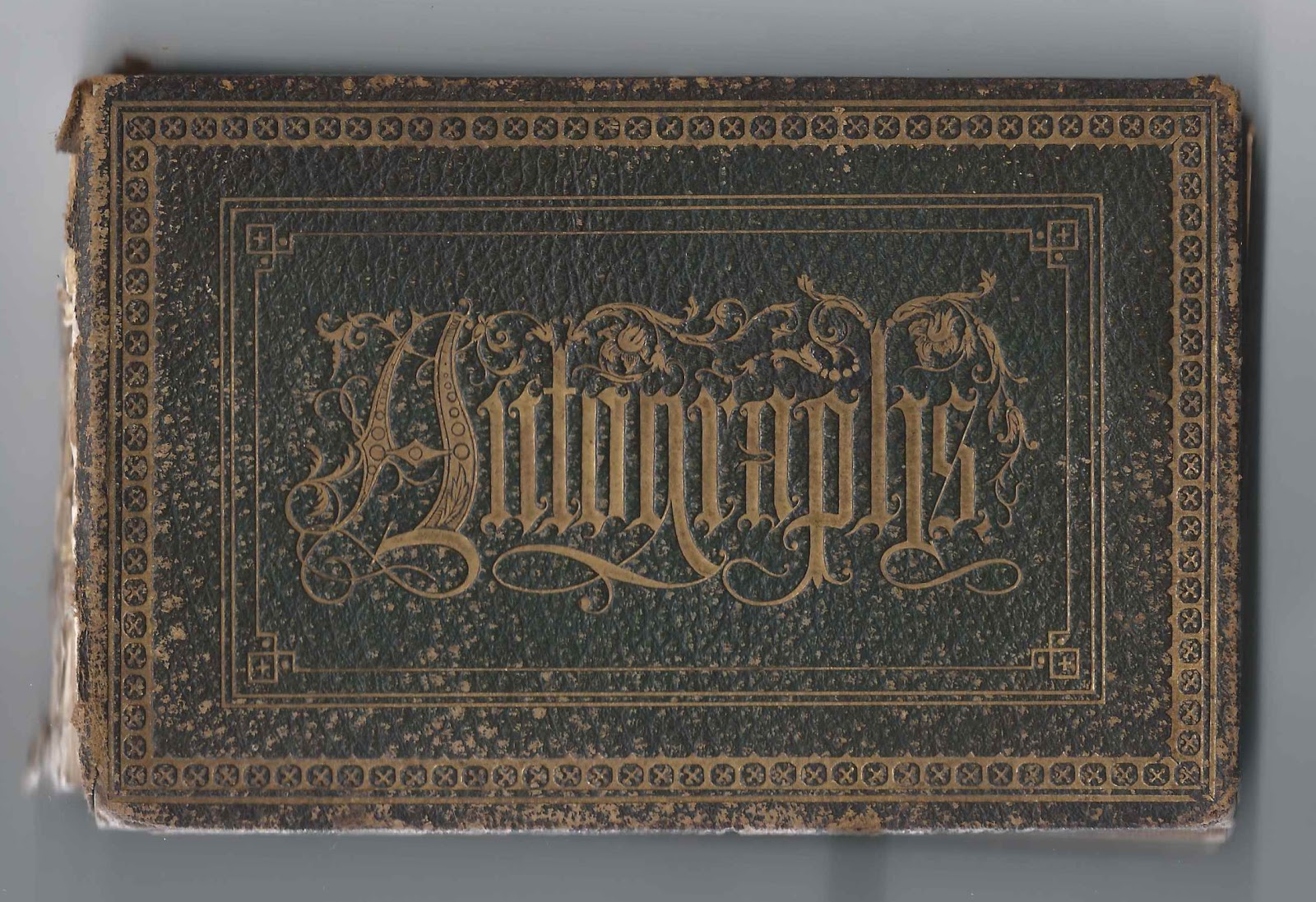 Autograph album that served two generations of the Merrill/Sawyer family of Danvers and Danversport, Massachusetts.

The few few pages of the album are missing, including the title page and any ownership page that might have identified the original owner, who was likely either Joseph Merrill or his future wife Mary Frances Sawyer, "Fannie".  There's a page with faint handwriting that appears to have been signed by Joseph Merrill in 1876, which would seem to point to Fannie as the original owner.

Later on, the album was taken over by Joseph and Fannie's children, most of whom signed in the album and had some of their friends sign.  The family by then was living at 10 River Street, Danvers, apparently in the Danversport section, as some of the children indicated.

All of the children of Joseph and Fannie signed pages in the album, some numerous times.  The children: 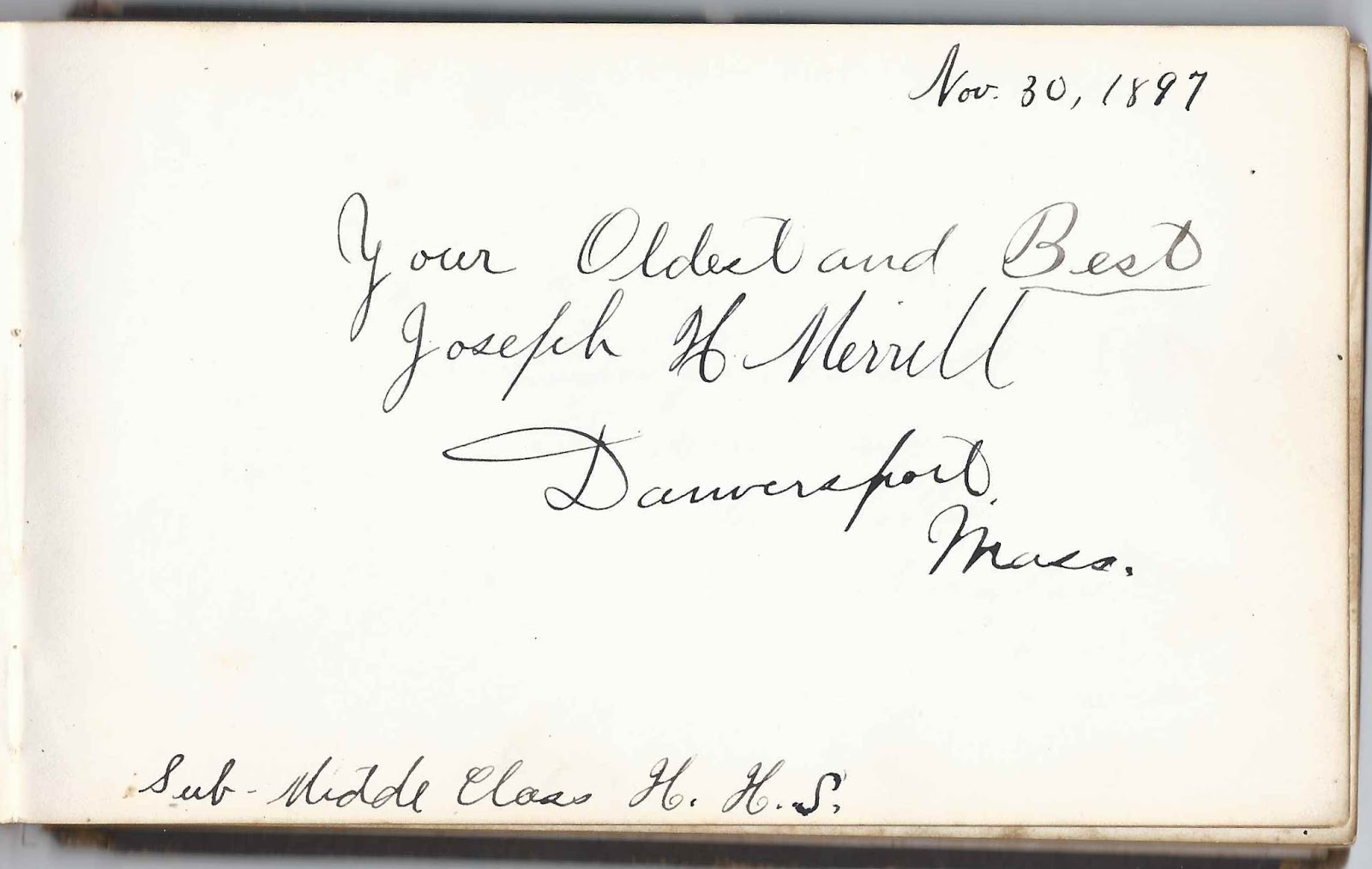 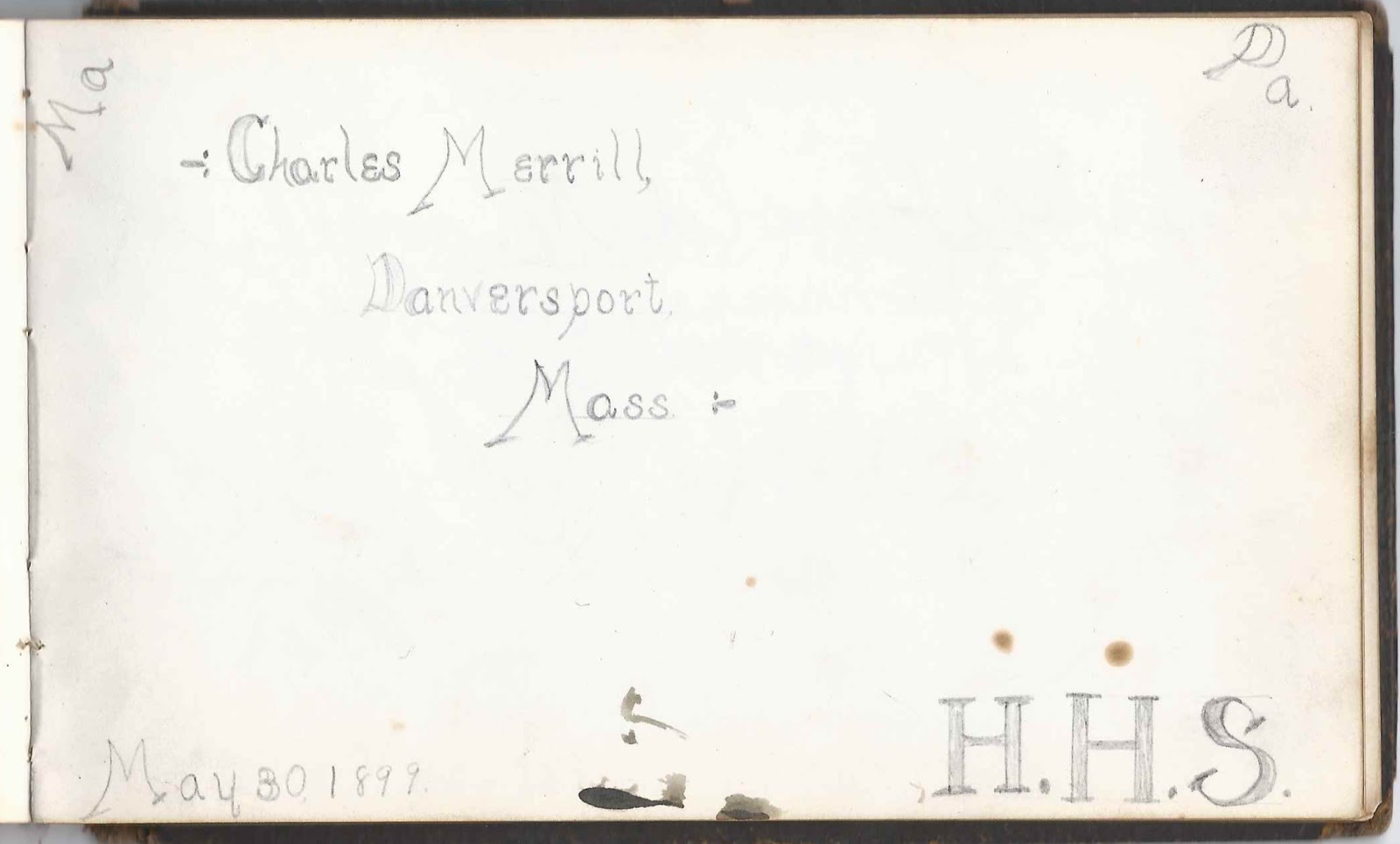 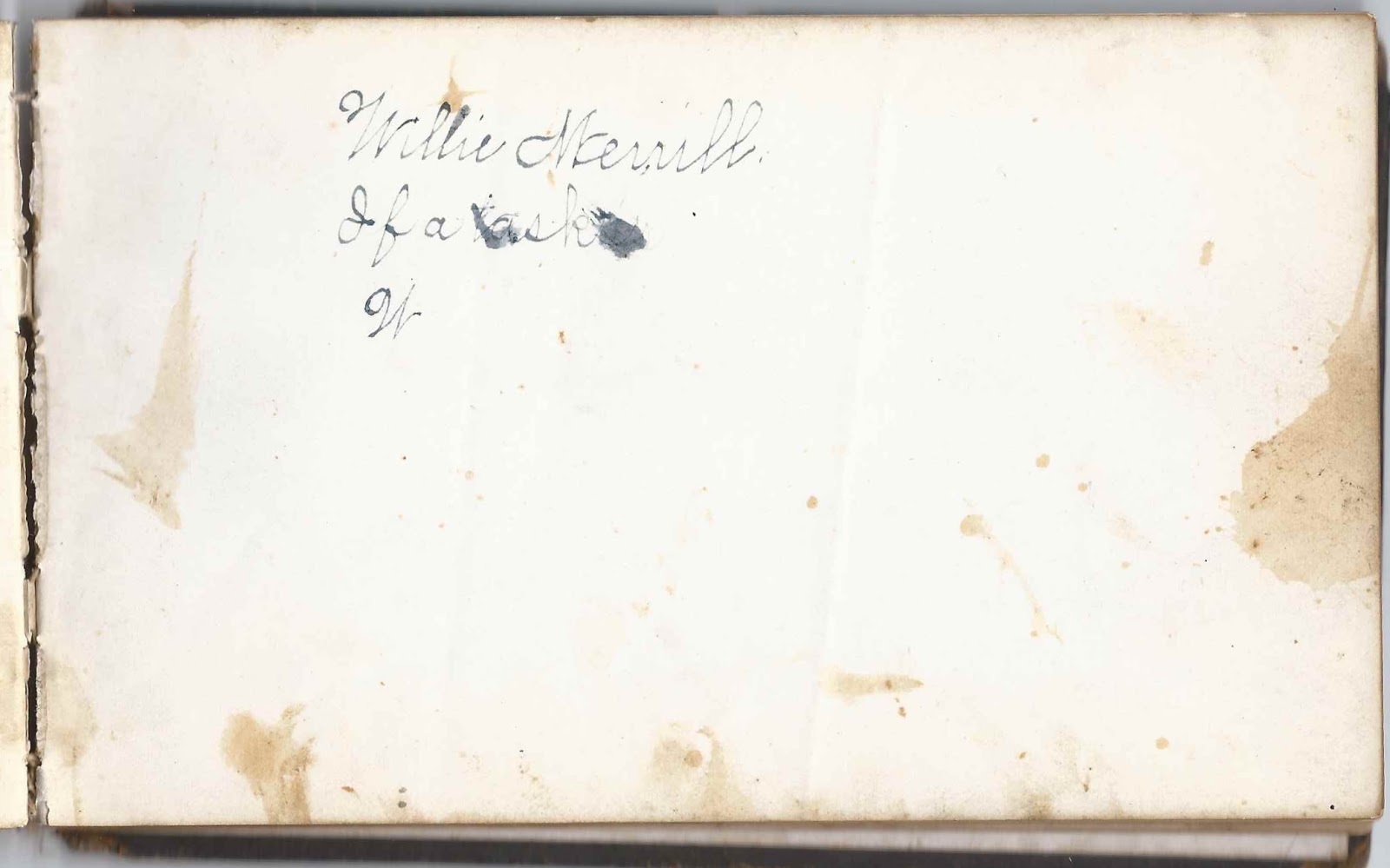 4.  Frederick Sawyer Merrill, born 20 February 1889 at Danvers, Massachusetts; married Winifred Dahl.  Fred signed several pages; the top of the two shown below when he was 9, about 1908, and the other on July 10, 1912.  He was away from Danvers, somewhere where the temperature was 102 degrees F. 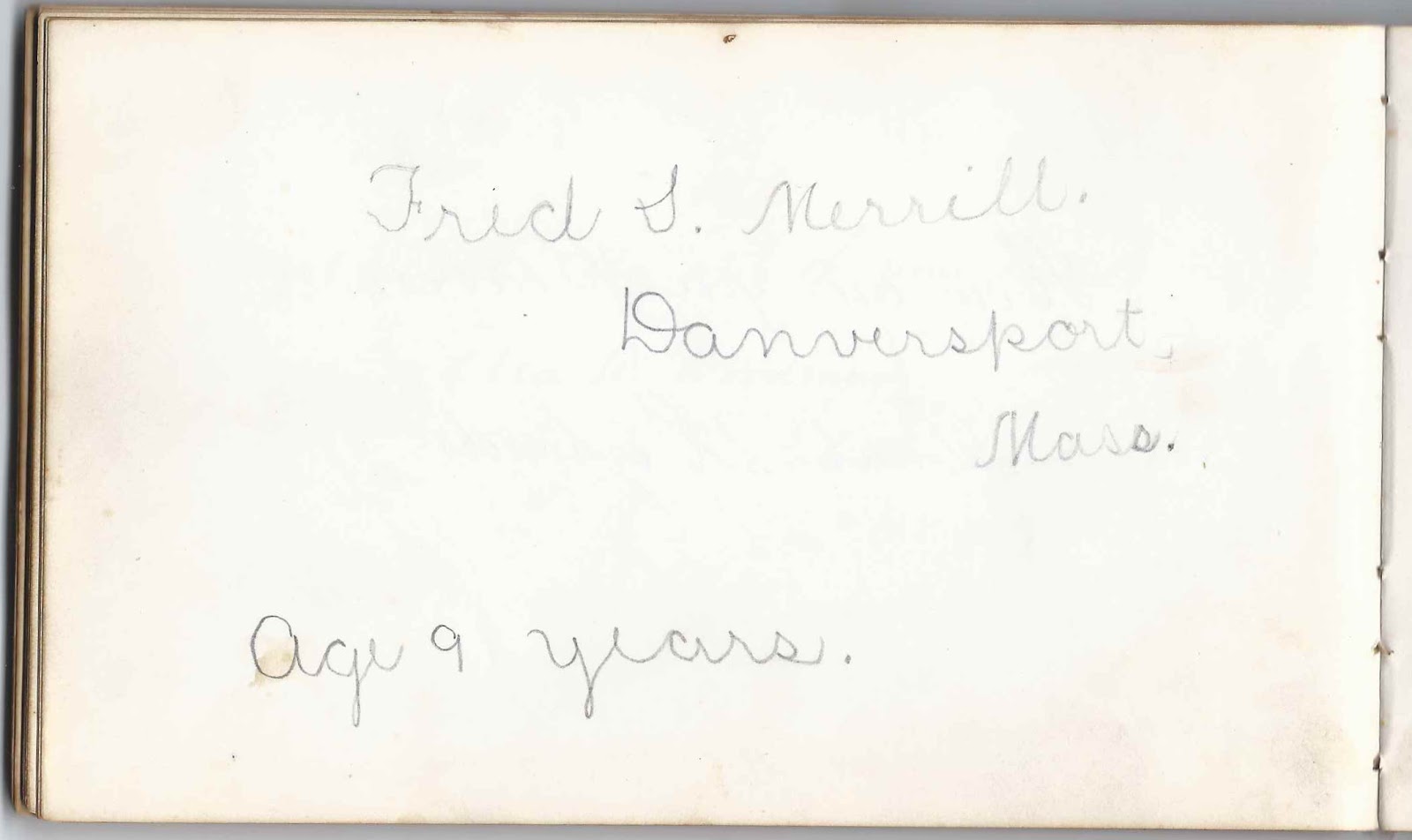 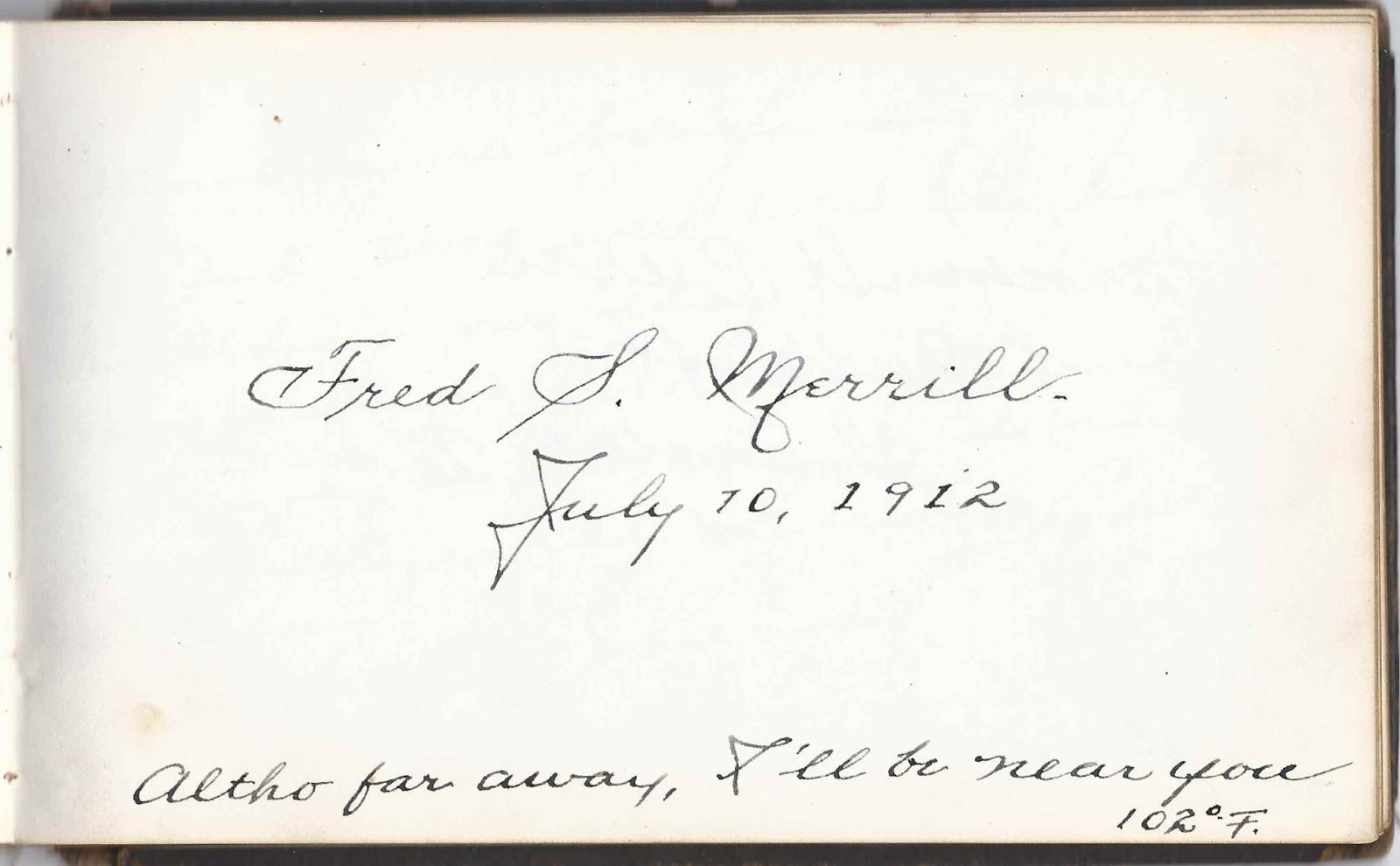 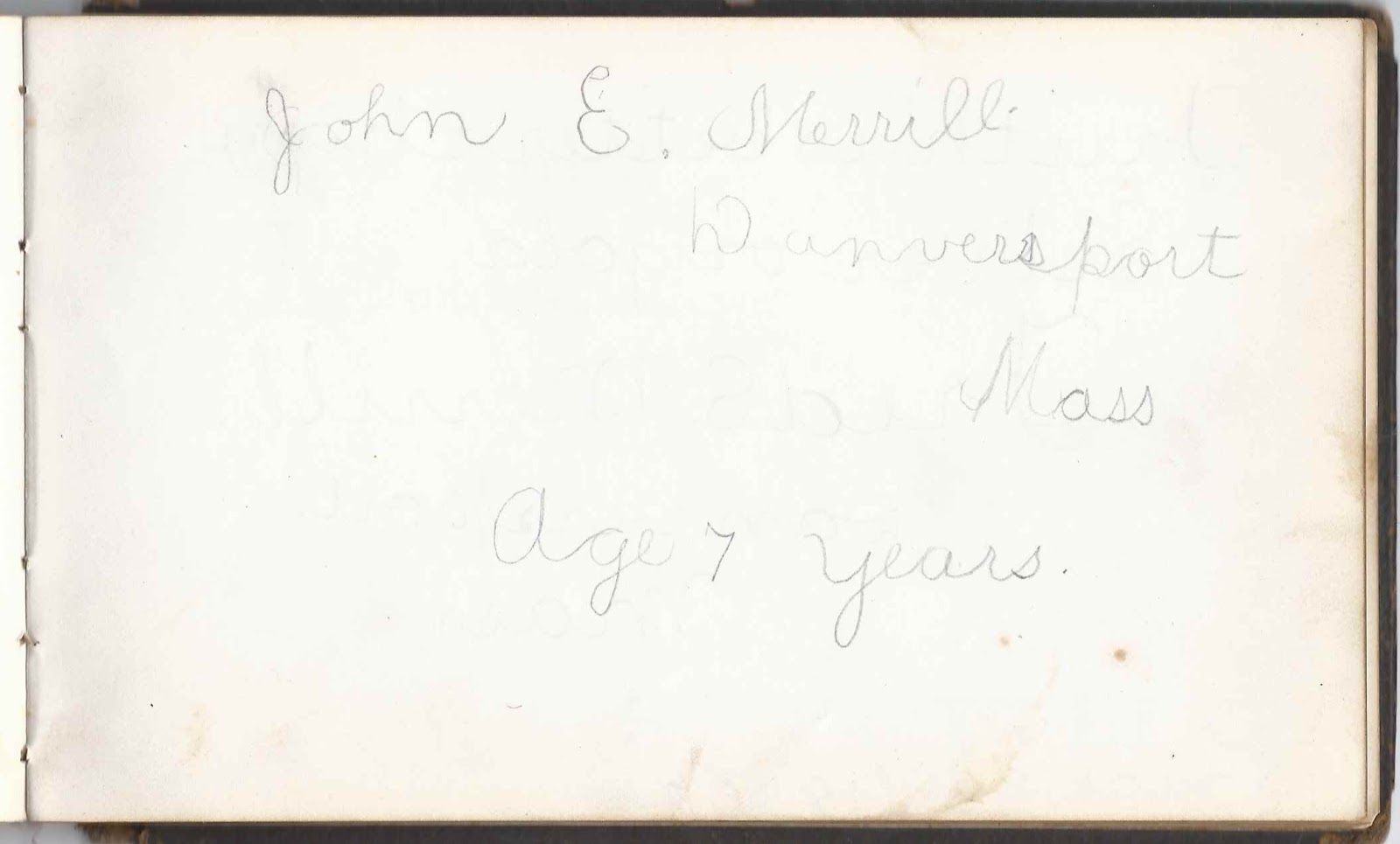 6.  Marjorie Grey Merrill, born 7 November 1892 at Danvers, Massachusetts; married Henry Augustus King.  Marjorie signed several pages in the album.  She signed this page, below, in 1906 when she was 13 years old. 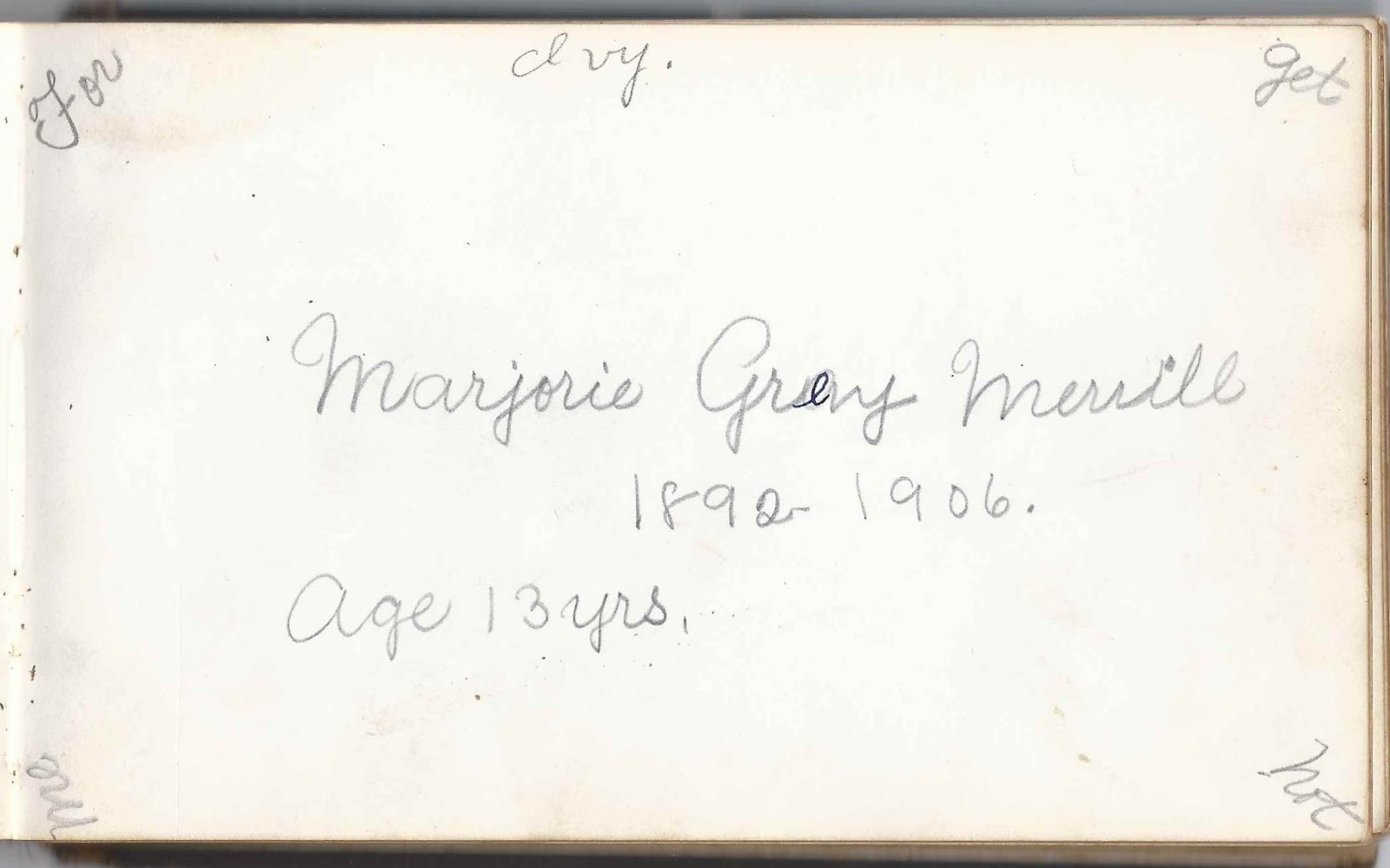 7.  Martha Felton Merrill, born 2 October 1895 at Danvers, Massachusetts; worked for a bank.  She signed several pages and seemed to be the person collecting autographs in the album's second life.  My favorite of her pages is this one.  I think it was Martha who wrote her name and those of three of her siblings. 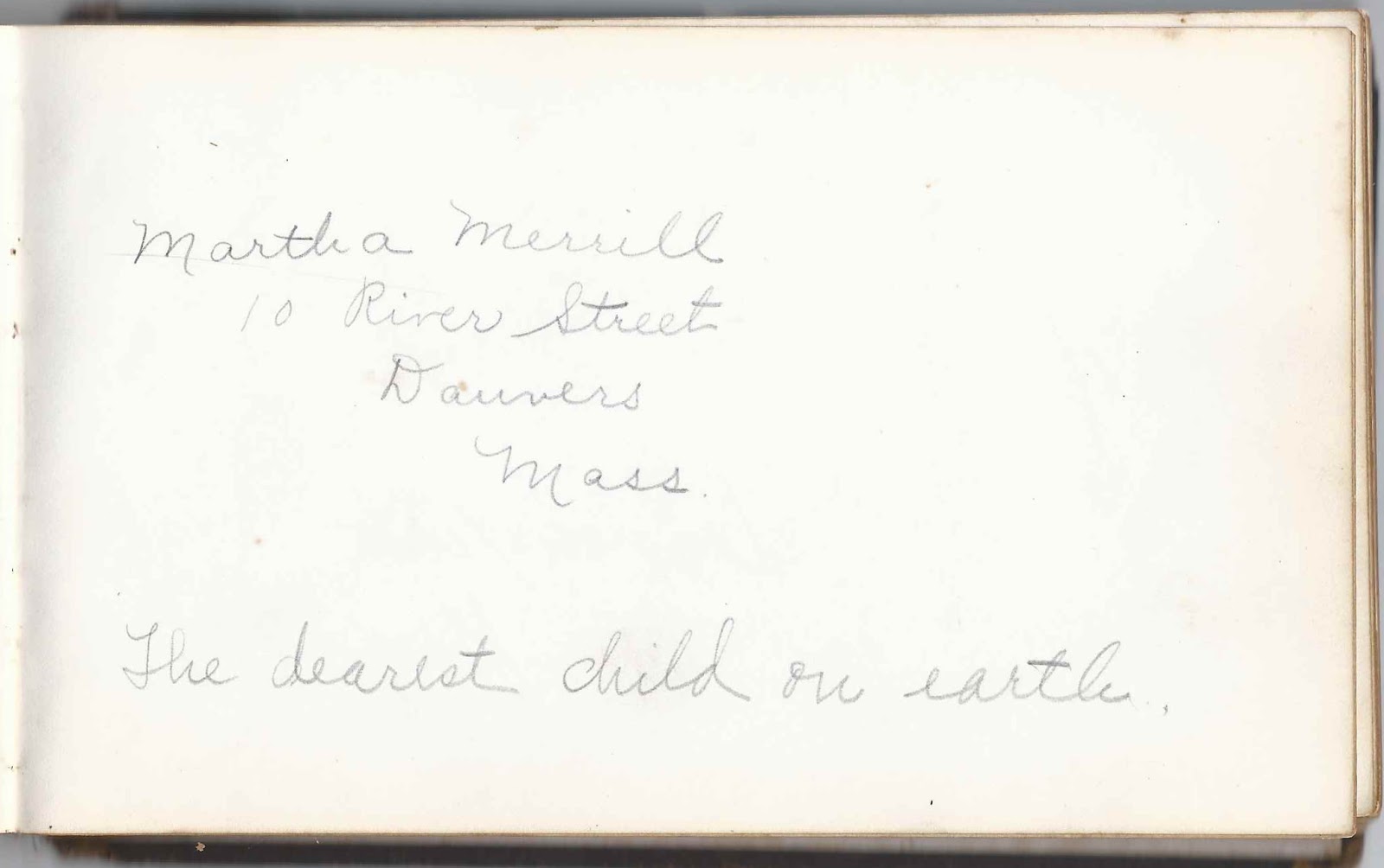 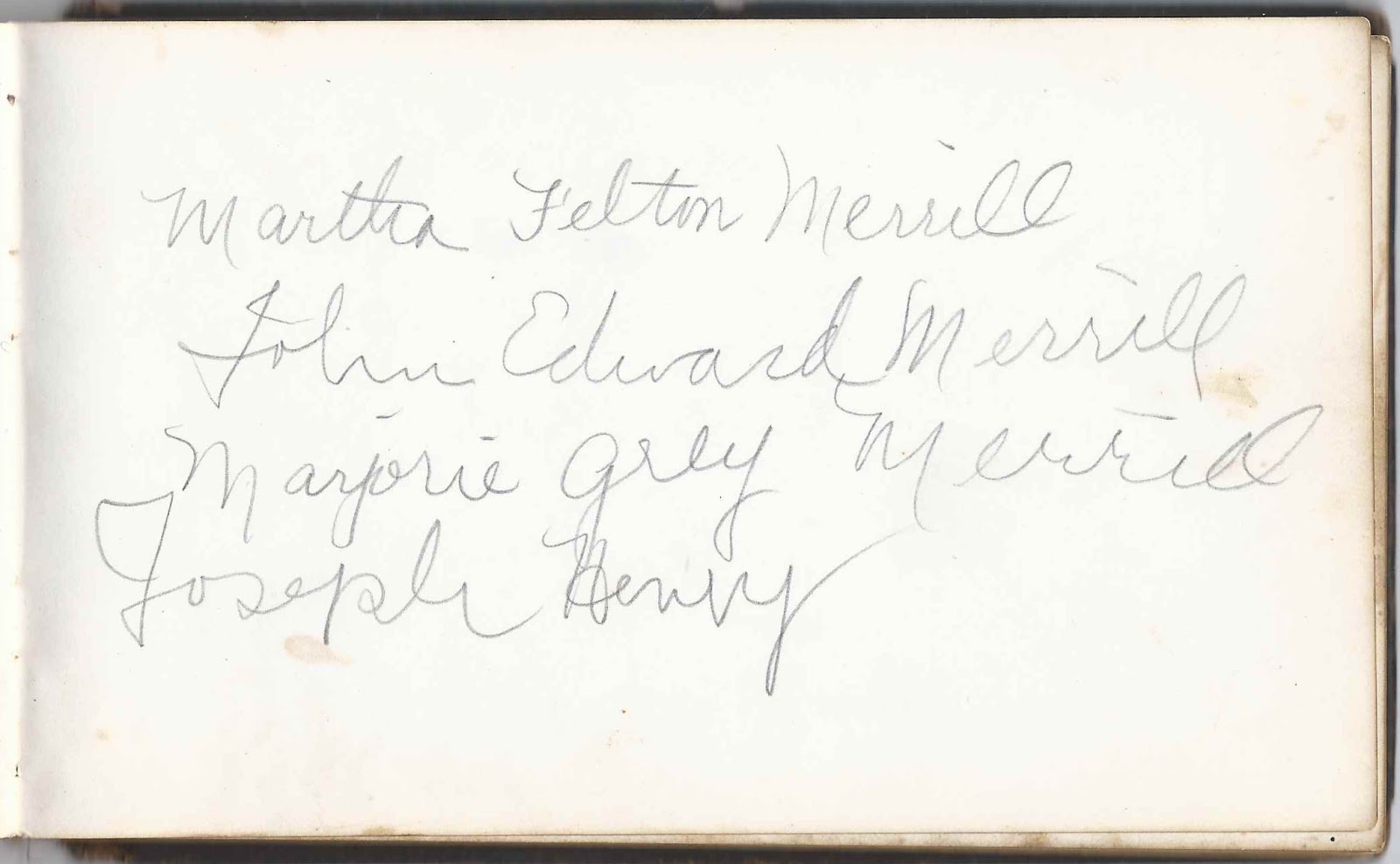 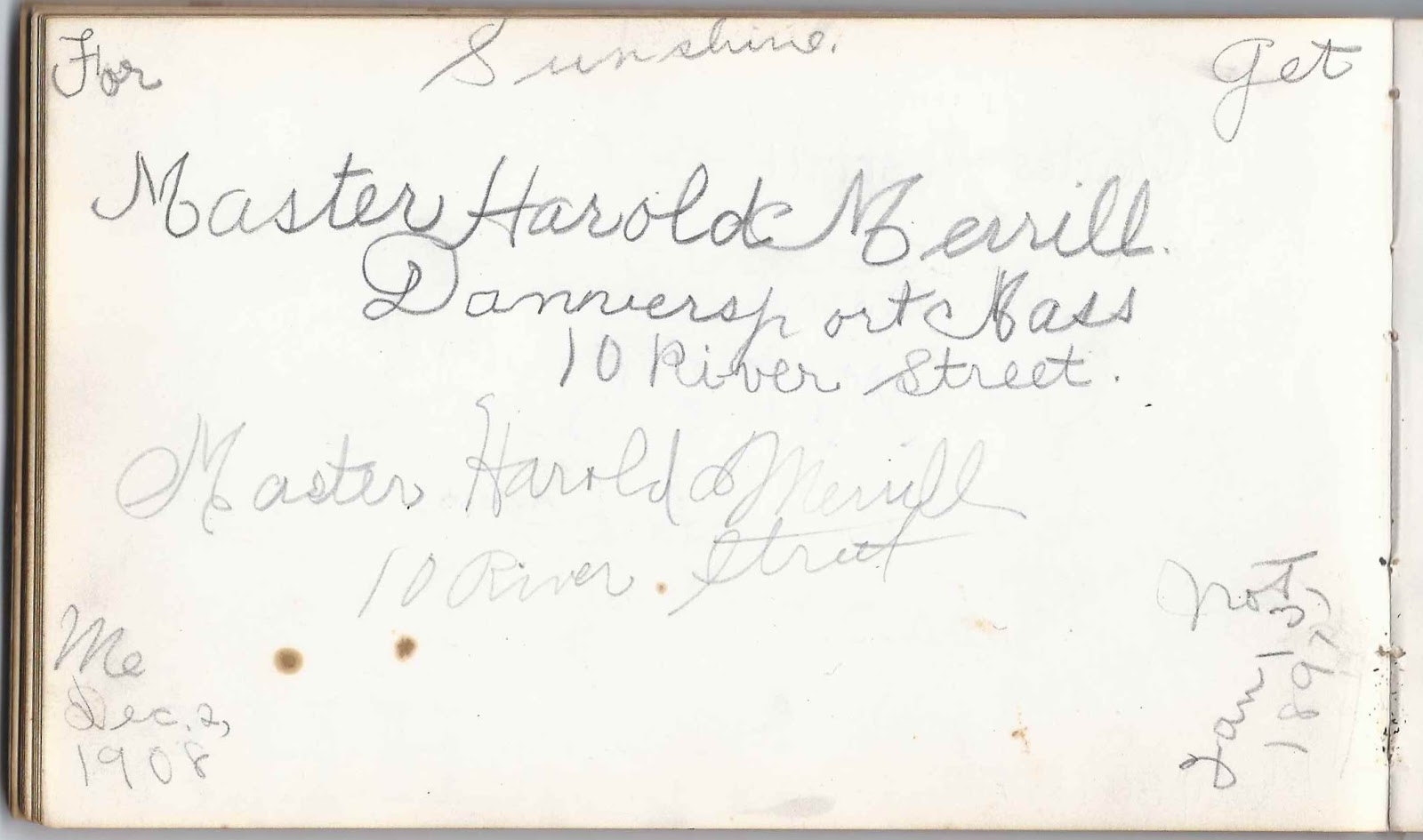 Two of the pages signed in the later era have cute illustrations.  One appears to show Florence L. Kelley, or perhaps it was that Florence drew the little girl and signed her name to it. 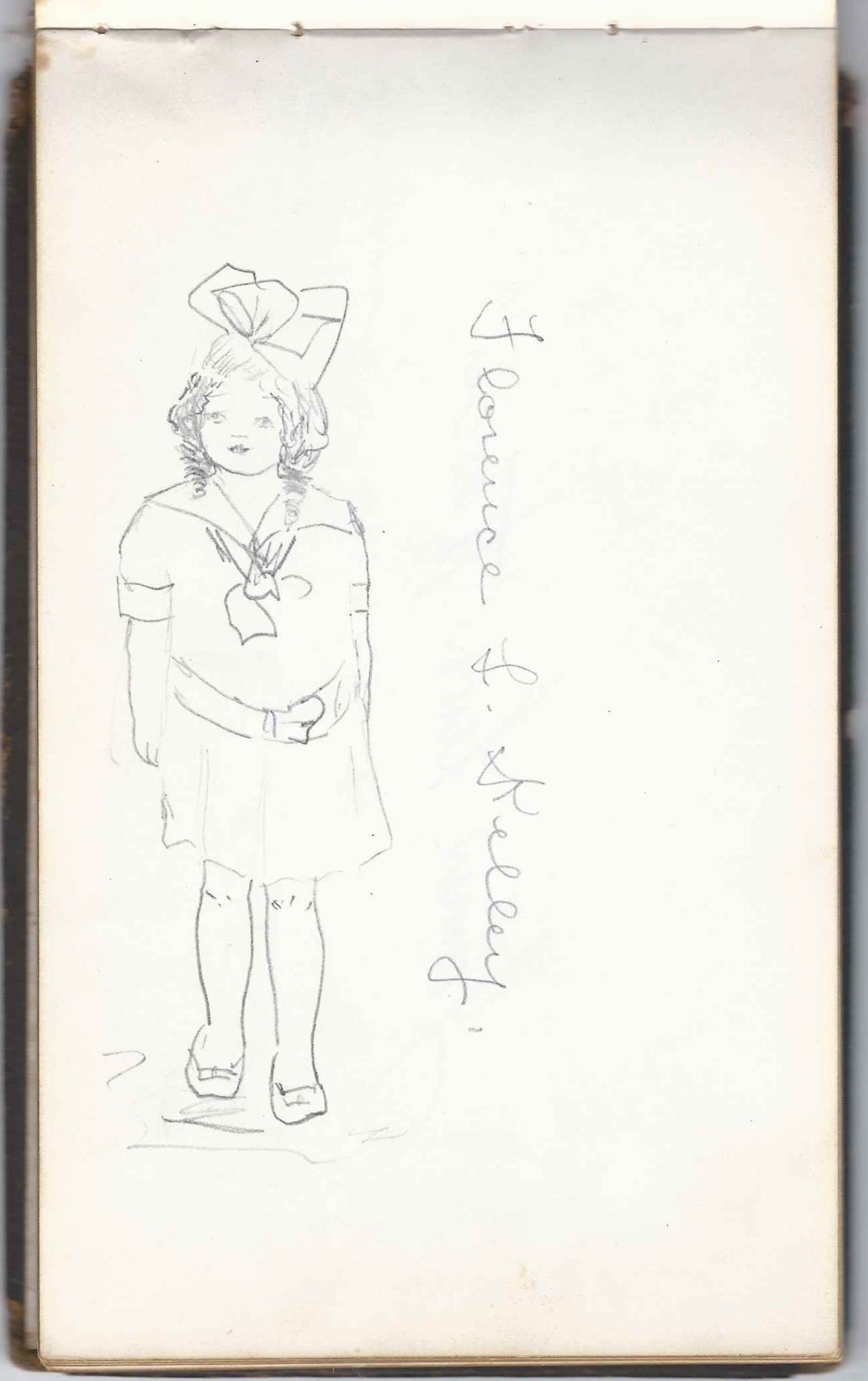 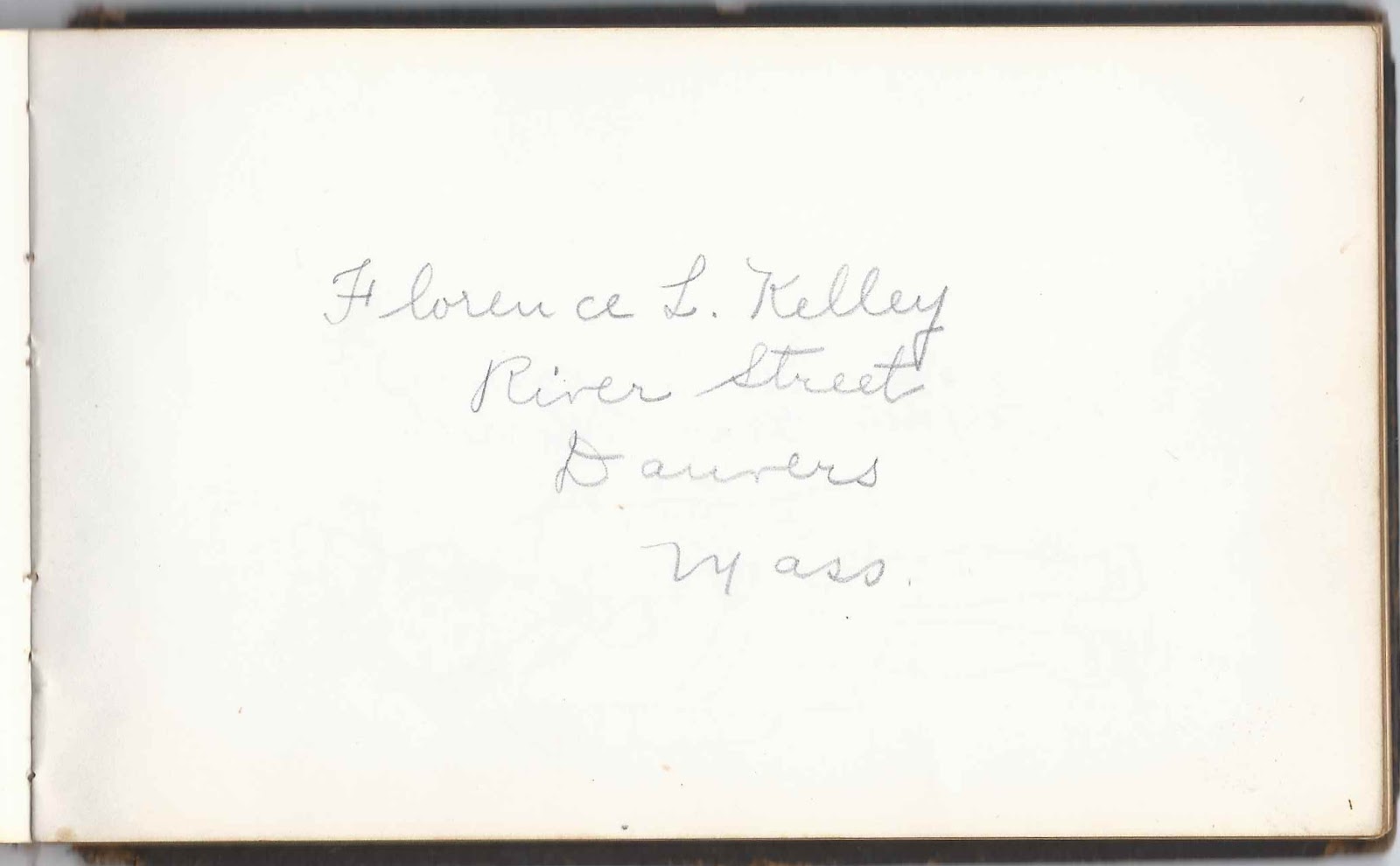 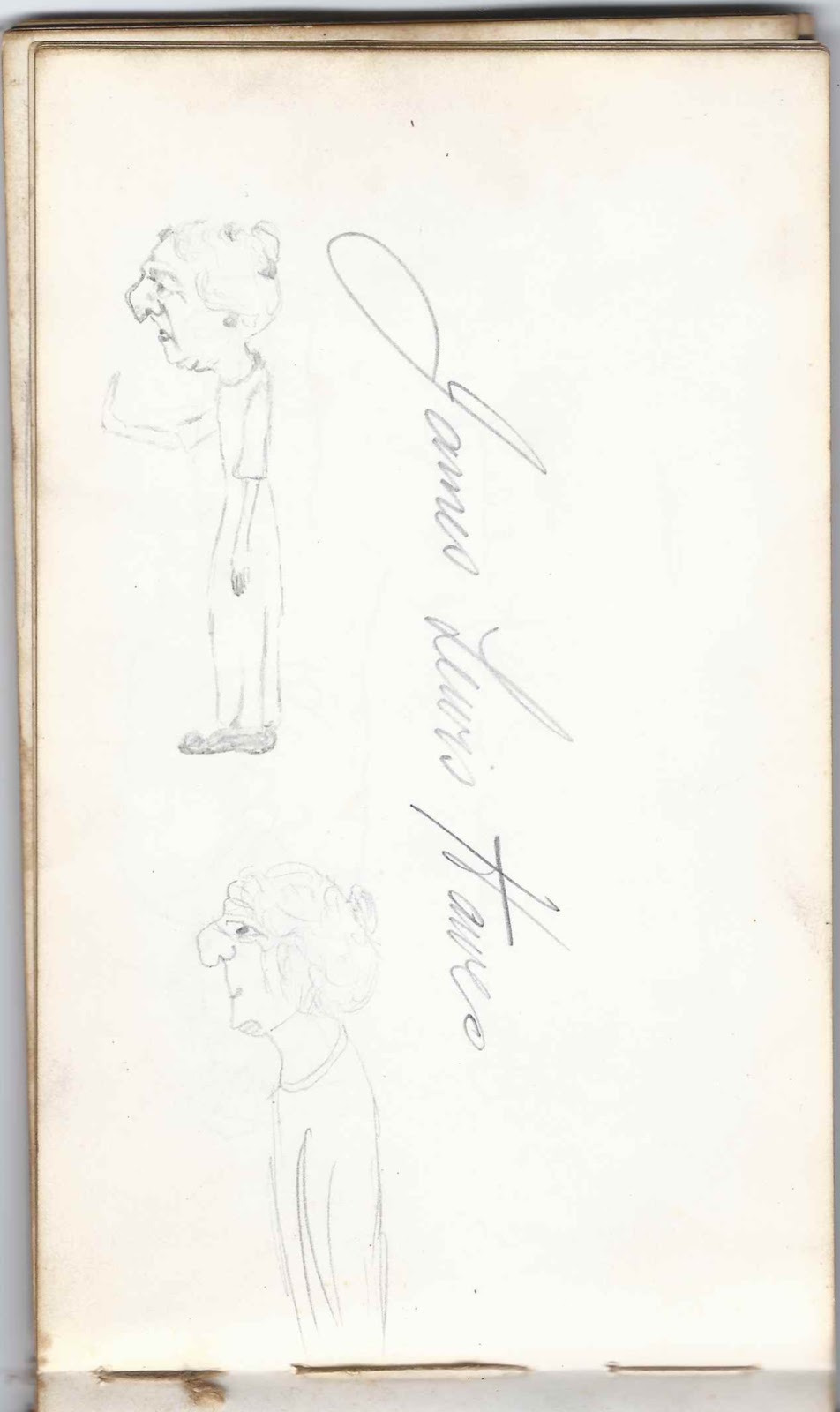 List of signers:  [Note: given names within a specific surname may not be in alphabetical order.]
Sorry about the duplicate names, but some of the children signed at different ages, and I wanted to show that.

Posted by Pam Beveridge at 3:44 PM