May 1901 Entries in Diary of James Moore, Lakewood area of Ellsworth, Maine 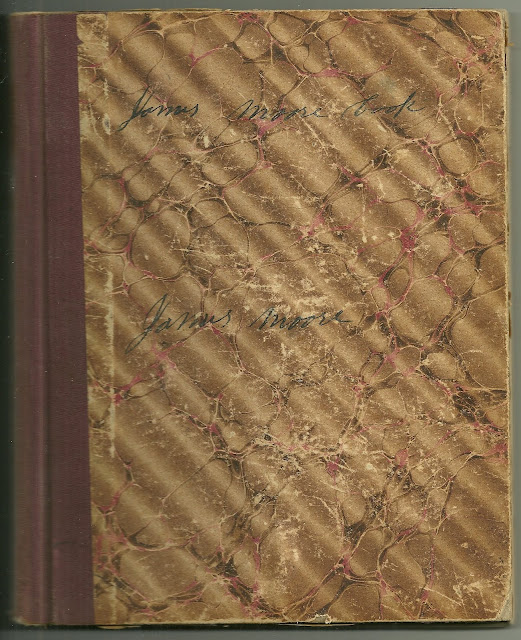 Diary of James Moore of the Lakewood area of Ellsworth, Maine. He kept his diary very intermittently until 1901 when he became more conscientious about keeping it up. If you look closely at the above image of the front cover, you will see his name, twice.

This diary was found with four other diaries that were kept by James' daughter-in-law Vesta Estella (Garland) Moore.

This post contains the entries James Moore made for May 1901. Other posts contain entries for
From brief online research, hopefully correct:  [corrections and additions welcome!

James and Laura had four children that I could find, perhaps more.
James Moore died 27 March 1903, an event that a reader of the diary knows, sadly, is coming. His wife Laura Ann (Garland) Moore died 22 May 1921.

If you have any corrections, additions or insights regarding the information provided here, please leave a comment or contact me directly. Thanks!

People mentioned in the entries, in alphabetical order by surname, not necessarily by given name: 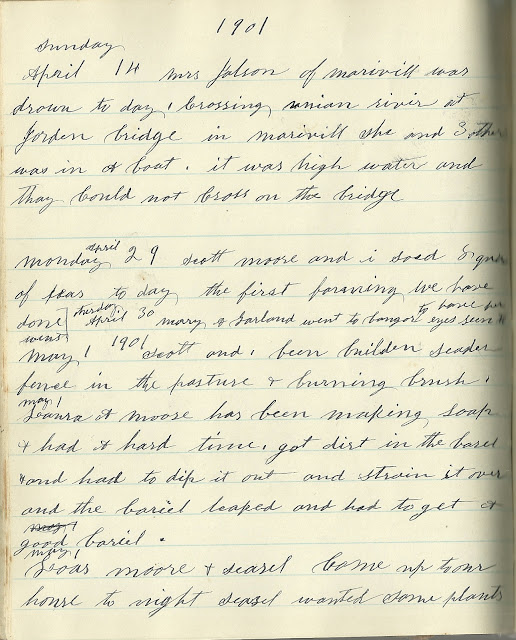 Wednesday, May 1, 1901. Scott and I been building [?] fence in the pasture & brush. Laura A. Moore has been making soap & had a hard time. Got dirt in the barrel and had to dip it out and strain it over and the barrel leaked and had to get a good barrel. Lois Moore and Cecil came up to our house tonight. Cecil wanted some plants. 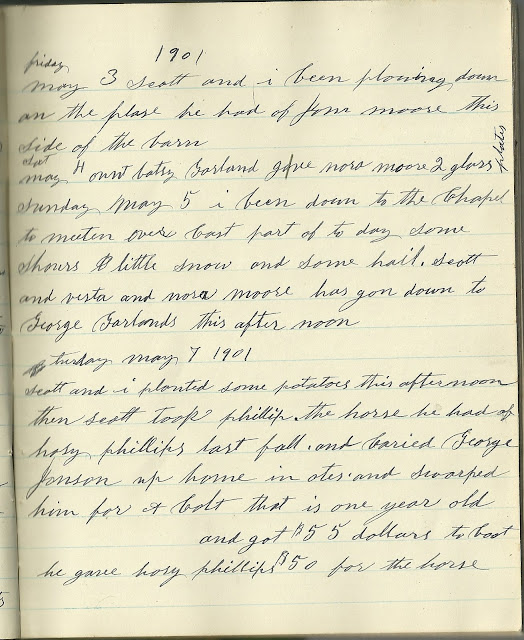 Friday May 3, 1901. Scott and I been plowing down on the place he had of [?] Moore this side of the barn.
May 4, 1901. Aunt Betsey Garland gave Nora Moore 2 glass plates.
Sunday, May 5, 1901. I been down to the Chapel to meeting over best part of the day. Some showers & little snow and some hail. Scott and Vesta and Nora Moore has gone down to George Garland’s this afternoon.
Tuesday, May 7, 1901. Scott and I planted some potatoes this afternoon. Then Scott took Phillip the horse he had of [Hosy?] Phillips last fall and carried George Johnson up home in Otis and swapped him for a colt that is one year old and got $55 to boot. He gave Hosy Phillips $50 for the horse. 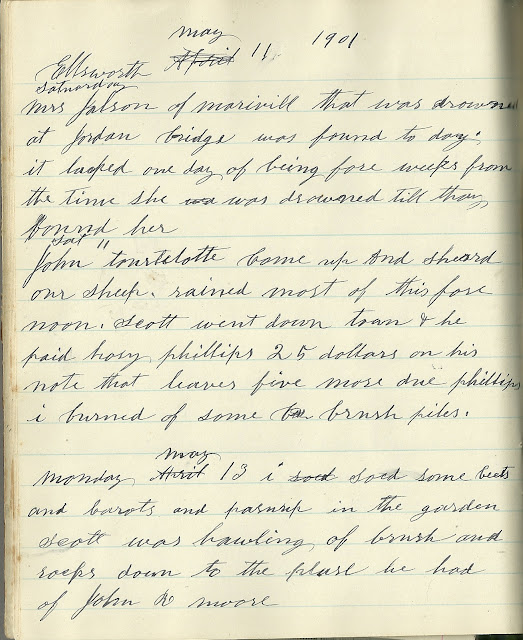 Saturday, May 11, 1901. Mrs. Jellison of Mariaville that was drowned at Jordan Bridge was found today. It lacked one day of being four weeks from the time she was drowned till they found her. John Tourtellotte came up and sheared our sheep. Rained most of this forenoon. Scott went down town and he paid Hosy Phillips $25 dollar on his note. That leaves $5 more due Phillips. I burned some brush piles.
Monday, May 13, 1901. I sowed some beets and carrots and parsnips in the garden. Scott was hauling off brush and rocks down to the place he had of John R. Moore. John R. Moore went up Green Lake for Charles [Gary, Lary?] to help fetch in [?] of stove wood. 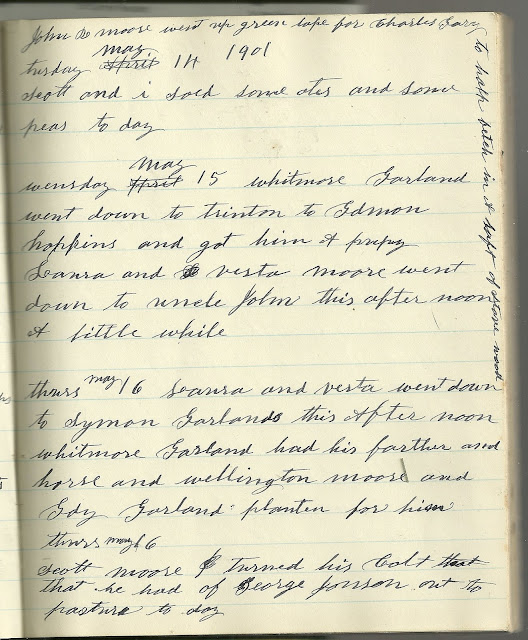 Tuesday, May 14, 1901. Scott and I sold some oats and some peas today.
Wednesday, May 15, 1901. Whitmore Garland went down to Trenton to Edmund Hopkins and got him a [?]. Leonora and Vesta Moore went down to Uncle John this afternoon a little while.
Thursday, May 16, 1901. Laura and Vesta went down to Lyman Garland’s this afternoon. Whitmore Garland had his father and horse and Wellington Moore and Edy Garland planting for him. Scott Moore turned his colt that he had of George Jelllison out to pasture today. 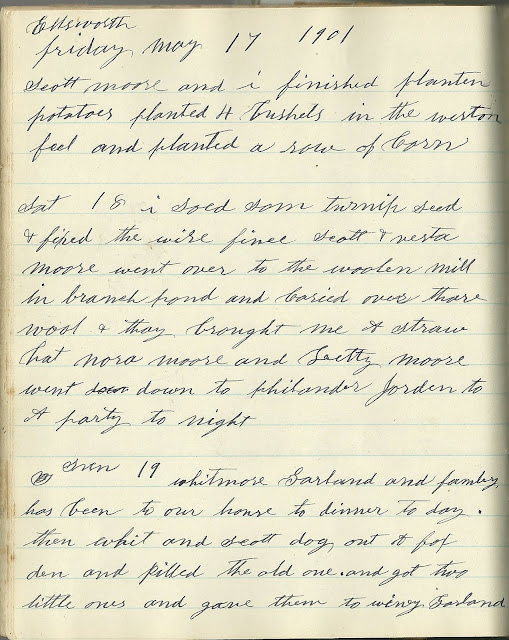 Ellsworth, Friday, May 17, 1901. Scott Moore and I finished planting potatoes. Planted 4 bushels in the [Weston or Western] field and planted a row of corn.
Saturday, May 18, 1901. I sowed some turnip seed and fixed the wire fence. Scott and Vesta Moore went over to the woolen mill in Branch Pond and carried over their wool and they brought me a straw hat. Nora Moore and Letty Moore went down to Philander Jordan to a party tonight.
Sunday May 19, 1901. Whitmore Garland and family has been to our house to dinner today. Then Whit and Scott dug out a fox den and killed the old one and got two little ones and gave them to [?] Garland. 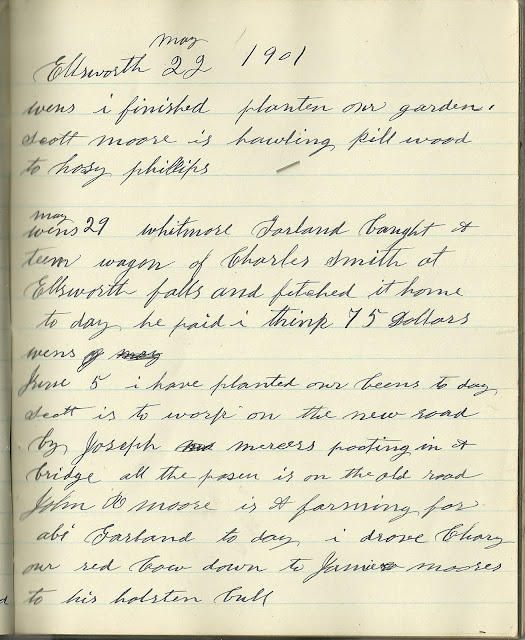 Ellsworth, May 22, 1901. Wednesday. I finished planting our garden. Scott Moore is hauling kill wood to Hosy Phillips.
Wednesday, May 29,1901. Whitmore Garland bought a team wagon of Charles Smith at Ellsworth Falls and fetched it home today. He paid, I think, $75 dollars.

Gary Moore Road might indicate the area in which James Moore lived and farmed.