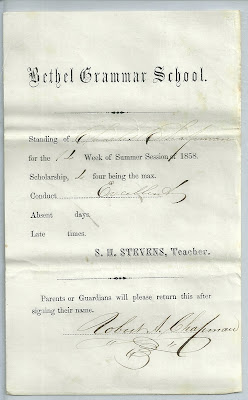 Ten scholarship and conduct reports from teacher S. H. Stevens at Bethel Grammar School for Charles Chapman.  All except one are signed by Charles' father or mother.   Indications are that he was an excellent student.

The reports were made by teacher S. H. Stevens during weeks of the Summer Session of 1858.   Unless Teacher Stevens had a lot of these left over and used them during the regular school year, Charles must have attended every week of Summer School. 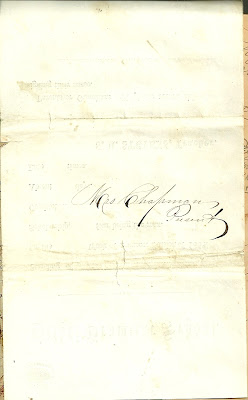 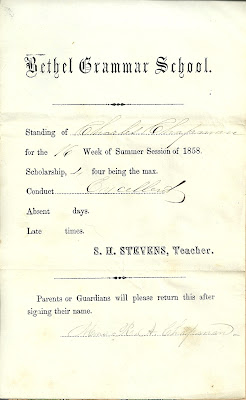 On 15 September 1875, Charles Jarvis Chapman married Annie Dow Hinds of Portland.  She was born in May of 1852, the daughter of Benjamin F. and Adrianna Viesie (Chase) Hinds.  Her paternal grandparents were Elisha and Ann P. (Dow) Hinds.  I'm not quite sure about her maternal grandparents.


According to Adrianna's death record, her parents were Abel Chase, born in Freeport, Maine, and Sarah Merrill, born in Portland, Maine.  Any records for Adrianna that I've found online have her father Abel born somewhere other than Freeport, and her mother as Sarah Cushing.  It's possible that the person supplying the information for the death record gave the incorrect maiden name for Sarah.   And it's possible that the other online references are incorrect. 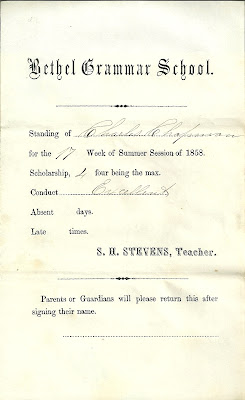 After his early success at Bethel Grammar School, Charles Jarvis Chapman attended Gould Academy and Gorham Academy and graduated from Bowdoin College at Brunswick, Maine, in 1868.  He went to Minnesota after college and worked for the Northern Pacific Railroad for about two years.  He then returned to Portland, Maine, and managed Norton & Chapman & Company, a grain commission house.  In 1886 he was elected mayor of Portland and was re-elected twice.  He died suddenly of Bright's Disease on 1 June 1898.


I wasn't able to nail down the identity of teacher S. H. Stevens.  I found a Simon Stevens and a Samuel Stevens in the Bethel area, but I don't know if either of these is the correct person.  The teacher may have been a  woman.  Perhaps a reader will come forth with information on S. H. Stevens.
If you have any corrections, additions or insights regarding the information presented here, please leave a comment or contact me directly.  Thanks!
A map of Bethel, Maine:
View Larger Map
A map of Portland, Maine:
View Larger Map
Thanks for stopping by!
.