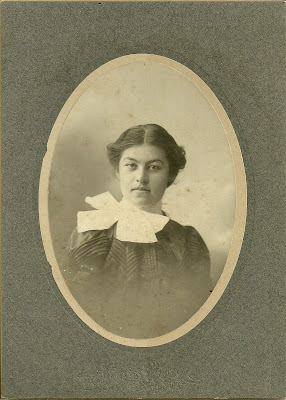 c. 1900 Photograph of Alice Haskell.  The imprint is very faint against the gray background, but I believe I can make out "Bangor, Maine". 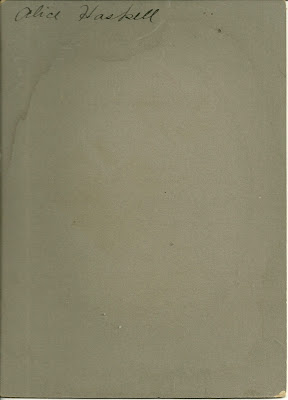 I searched for an Alice Haskell in the Bangor, Maine area, and found one, Alice L. Haskell, born about 1871 in Maine, the daughter of Henry and Lorinda Haskell.
However, Bangor is the commercial center of a large portion of Maine, and many people, then and now, gravitate there for shopping, schooling and employment.  So it's possible that the Alice Haskell in the photograph came from a larger area of Maine.
I'll delve into two Alice Haskells that I found, and there could be more.
From online research, hopefully correct:
First, the Alice Haskell of Bangor, Maine.
Alice Haskell was born in August of 1871 or 1871 in Maine, the daughter of Henry and Lorinda Haskell.   The family is enumerated in the 1880 Census of Bangor, Maine, where Henry gave his occupation as house carpenter.
Based shakily on the 1850 Census of Bangor, Maine, I believe that the parents of Henry Haskell were Abner and Achsah Haskell.  I haven't as yet found any information on the parents of Abner or Achsah, other than that Abner's father was born in Maine, and his mother in Massachusetts.   I found Abner in the 1850-1880 Censuses of Bangor.  Achsah appears to have died in the 1870s.
By the 1900 Census, Alice Haskell and her parents were living in Santa Clara, California.  Alice's name was now Alice Terrill and she indicated she was married, but Mr. Terrill was not listed in the household.
There's a dearth of information online about this Alice and her family.
Now for the second choice, Alice Weaver Haskell of Deer Isle, Maine.  It's possible that this Alice traveled from Deer Isle to Bangor, which is the closest large city.  She may have gone to school there or worked there or visited for a bit of shopping and a photography sitting.
Alice Weaver Haskell was born 12 April 1883 at Deer Isle, Maine, the daughter of Jasper Webster Haskell and his wife Martha Flavilla (Haskell) Haskell.  Her paternal grandparents were Aaron Stickney Haskell and his wife Margaret H. McDaniel Atwood Haskell.  I don't have the names of Margaret's parents, and I'm not sure if Margaret's maiden name was McDaniel or Atwood.


On 27 December 1904, Alice married Irving Charles Gray, who was born 6 July 1880 at Deer Isle, Maine, the son of Charles Gray and his wife Olive Jane (Pickering) Gray.  Alice and Irving had a son, Everett Randall Gray, born in late 1905.


Her husband married a second time, to Roseana A. Pentecost, who was born 3 Oct 1888 in Nova Scotia, Canada.


I found conflicting birth dates, names spellings and death dates for Irving online.  However, according to the Maine Marriages online database, he was Irving C. Gray.  According to his World War II draft registration card, his date of birth was 27 July 1880.  As for his date of death, I found 1949 and 1956.  It's possible that he is sometimes confused with a Charles Erving Gray.


If you have any corrections, additions or insights regarding the information presented above, or if you know of another candidate for the Alice Haskell in the photograph, please leave a comment or contact me directly.

Posted by Pam Beveridge at 9:04 AM