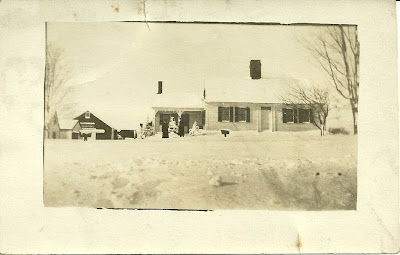 Real photo postcard of the West Hampden, Maine, home of Raymond Goodell, unused postally but with a 1914 message on reverse, probably from Raymond or, more likely, his wife Harriet S. "Hattie" (Barrows) Goodell, to the wife of her brother George, Theo (Jose) Barrows, mother of Maine Governor Lewis Orin Barrows.  The message is dated March 22, 1914. 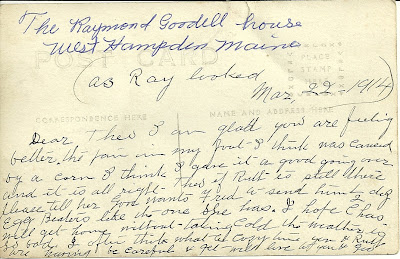 Transcription:
The Raymond Goodell house, West Hampden, Maine
(as Ray looked, March 22, 1914)
Dear Theo,
I am glad you are feeling better.  The pain in my foot I think was caused by a corn, I think.  I gave it a good going over and it is all right.  Theo, if Ruth is still there please tell her, Good wants Fred to send him today [?]egg beaters like the one she has.  I hope Chas. will get home without taking cold - the weather is so bad.  I often think what a cosy time you and Ruth are having.  Be careful and get well.   Love????
As you can see, above, the card is addressed to Theo, who was Theo (Jose) Barrows, likely then living in Newport, Maine with her husband, George, who was the brother of Harriet S. (Barrows) Goodell.
Raymond Goodell was born about 1857 in Maine, the son of Alfred and Elizabeth or Ann Elizabeth (Pickard, or sometimes Packard) Goodell of Maine.  His paternal grandparents were John and Sarah (possibly Patterson) Goodell.  His maternal grandparents were Ephraim and Elizabeth Pickard of Hampden, Maine.

About 1884 he married Harriet S. "Hattie" Barrows, who was born about 1858 in Maine, the daughter of Lewis and Fidelia (possibly Stanley) Barrows.  Her paternal grandparents were Putnam and Sophia (Leonard) Barrows.  I haven't yet learned the names of Fidelia Stanley's parents.

If you look closely, you will see two people standing in front of the house.  I'm not sure who they are, but it's very possible that one of them is Raymond Goodell's wife Hattie S. (Barrows) Goodell.

Hattie's brother, George O. Barrows, married Theo Jose, who was born about August 1869 in Maine, the daughter of Orin and Laura Jose of Newport, Maine.  Their son Lewis Orin Barrows, started out as a pharmacist but eventually became Governor of Maine.

Posted by Pam Beveridge at 3:42 PM