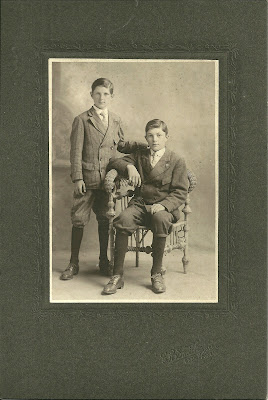 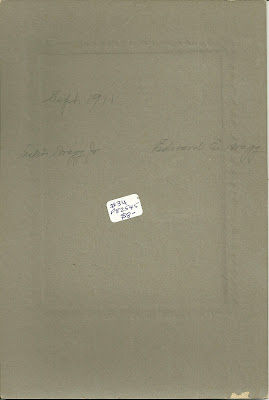 From online research, hopefully correct, and assuming that I have the correct Bragg family:

I found the World War I draft enlistment card for Lester Blake Bragg, Jr., where he indicated he was single (he also indicated he'd lost three fingers).  I found a listing in the Maine Marriages online database for a Lester B. Bragg who married Rose Landry, but that's a different Lester B. Bragg, Lester Bernard Bragg  I did find a Lester Bragg living in th 1930 Census of Falmouth, Maine, similar in age, and married to a Stella, but I don't know if he was our Lester.

I haven't yet found a World War I draft enlistment card for Edward E. Bragg, but I did find a marriage in 1920 for him, to Laurie P. Snow.

It's possible that Edward and Laurie are the Edward and Laura Bargo enumerated in the 1930 Census of Meriden, Connecticut. If so, there were no children living with them.

If you have any corrections, additions or insights regarding the information presented here, please leave a comment or contact me directly.

A map of Portland, Maine:

A map of Cumberland, Maine: