Extract of an 1811 Mortgage between Jonathan Dana Clark and Abigail Emerson for 140-1/2 Acres in Berwick, Maine 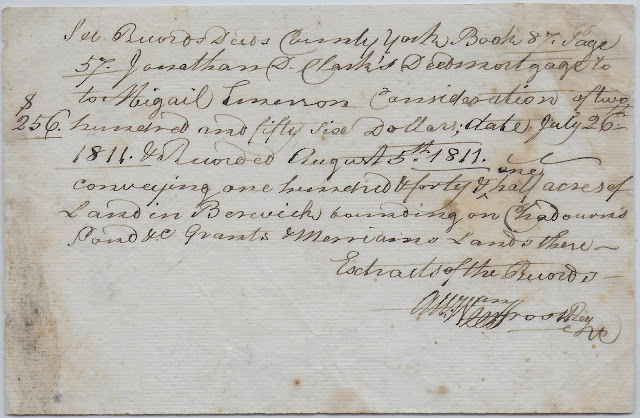 Thank you to fellow members of the Maine Genealogical Society for help in deciphering names in this document.

Note: Berwick was much larger in 1811 than it is now; South Berwick was set off in 1813 and North Berwick in 1831, with other portions set off later.

The extractor was William Frost, Register, presumably York County Treasurer William Frost (1754-1836), many of whose papers are held at Yale University.

Read the original instrument on page 57 of Book 87 - scroll to the next image.  The extract notes that the acreage was bounded by land owned by Chadbourn, Grant and Merriam, but the original goes into far more detail.

If you have information to share on Jonathan Dana Clark, Widow Abigail Emerson, William Frost or the abutting landowners, please leave a comment for the benefit of fellow family researchers.

Posted by Pam Beveridge at 6:37 AM