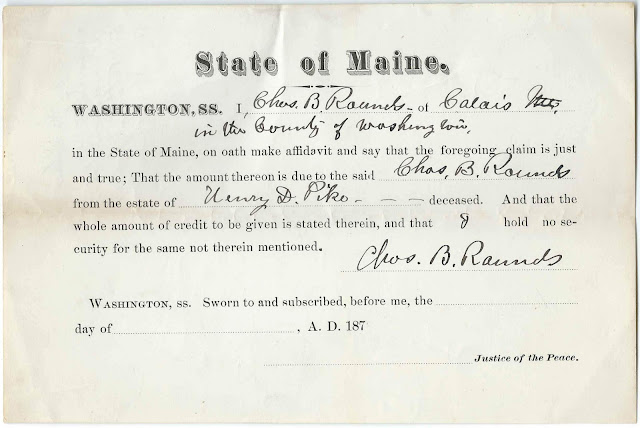 c1900 document from Calais, Maine, where attorney Charles Bean Rounds is certifying a claim for telephone pole work against the estate of Henry Deane Pike. 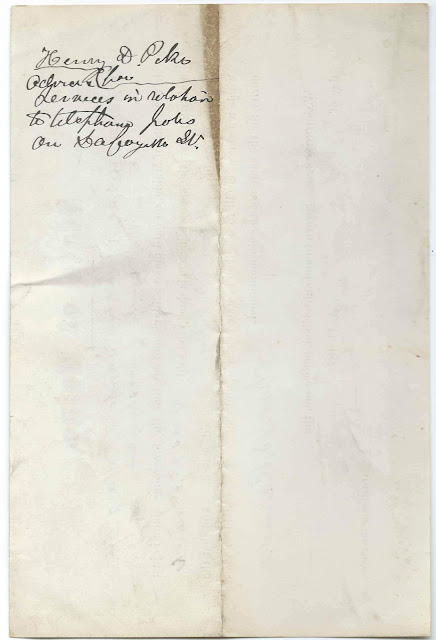 The form was apparently originally printed in the 1870s; note the preprinted year of 187x. However, between the mention of telephone poles and the fact that a Henry Deane Pike died at Calais in May of 1900, I believe the documents dates from after May 1900.

The document measures approximately 8" by 5-1/4" and is folded along the long edge.

Charles B. Rounds was presumably attorney Charles Bean Rounds, who, according to his birth record, was born December 8, 1834 at Danville, Maine, son of Nathaniel Rounds and Purline (Perley) Rounds, who were born at Buxton, Maine, and Gray, Maine, respectively.  After a long legal career at Calais, Maine, Charles died on November 16, 1903 at Calais, Maine.  Charles' Find a Grave memorial contains a lengthy eulogy given by fellow attorney Richard J. McGarrigle, which contains much information on Charles' life and career.

Henry D. Pike was presumably merchant Henry Deane Pike, who was born August 8, 1848 at Calais, Maine, the son of Saccarappa, Maine, native Samuel G. Pike and Westbrook, Maine, native Ellen (Hickey) Pike, according to Henry's death record.  Henry died on May 24, 1900 at Calais, Maine; his Find a Grave memorial gives his birth year as 1849, but that is based subtracting his age at death, 51, from his death year, 1900, without taking into account that he was just a few months shy of his 52nd birthday.

If you have more information on Charles Bean Rounds and/or Henry Dean Pike, or if you feel they are different people than described, please leave a comment or contact me directly.

Posted by Pam Beveridge at 1:36 PM