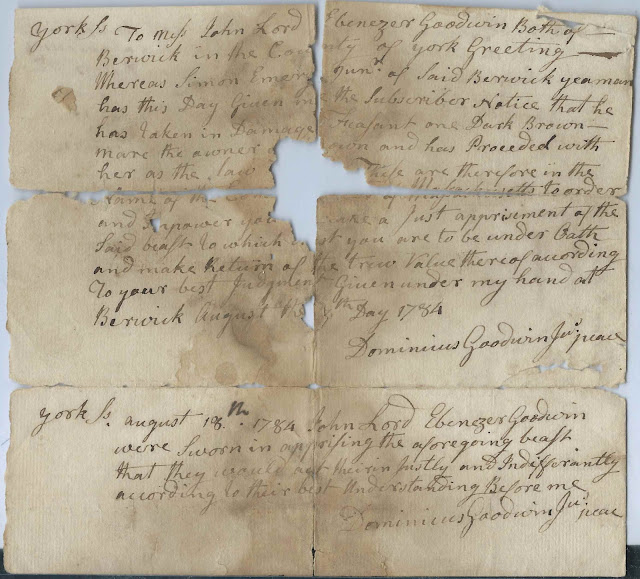 August 18, 1784 document where York County, Maine, Justice of the Peace Dominicus Goodwin has appointed John Lord and Ebenezer Goodwin, both of Berwick, Maine, to determine the value of a stray mare.  Another name mentioned is that of Simon Emery, Jr.

Note:  The District of Maine was part of Massachusetts until 1820.

An approximate transcription of the document appears at the end of this post.  Feel free to make corrections and suggestions for the blanks. 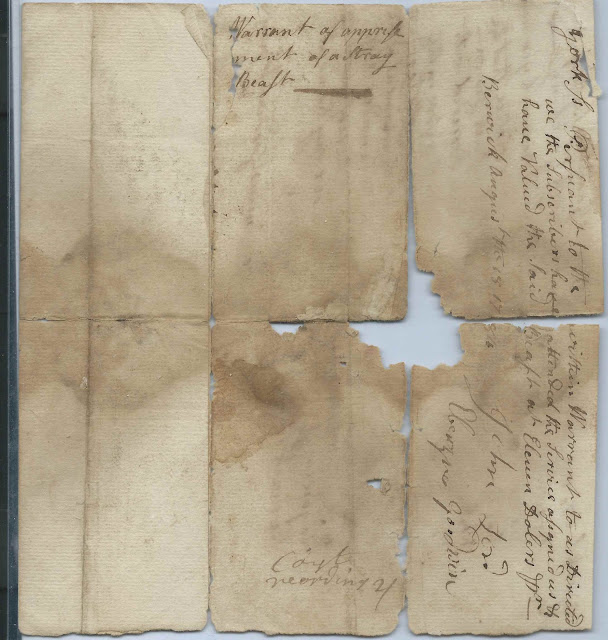 From brief online research, hopefully with the correct people:

There were a Simon Emery (1727-1795) who lived in the Berwick, Maine area, even at one time at Berwick itself; his father was also named Simon Emery.  But I can't rule out that there might have been another father and son named Simon Emery.

York SS
To Messrs John Lord and Ebenezer Goodwin, Both of Berwick in the County of York
Greeting
Whereas Simon Emery Jun. of Said Berwick yeoman has this Day Given me the Subscriber Notice that he has taken in Damage ___ one Dark Brown Mare the owner ____ [unknown ?] and has Proceeded with her as the law _____ are therefore in the Name of ___ Massachusetts to order and Empower you ___ make a just apprisement of the Said beast to which ___ you are to be under Oath and make Return of the True Value thereof according to your best judgment.  Given under my hand at Berwick, August the ___ Day 1784.
Dominicus Goodwin, Justice of the Peace

York SS, August 18, 1784.  John Lord Ebenezer Goodwin were Sworn in apprising the aforegoing beast that they would act therein Justly and Indifferantly according to their best Understanding.  Before me
Dominicus Goodwin, Justice of the Peace

Warrant of apprisement of a Stray Beast

If you have information on any of the men mentioned in this document, please leave a comment or contact me directly.