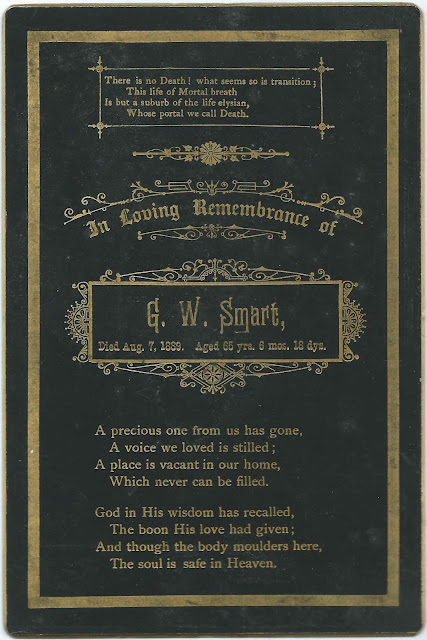 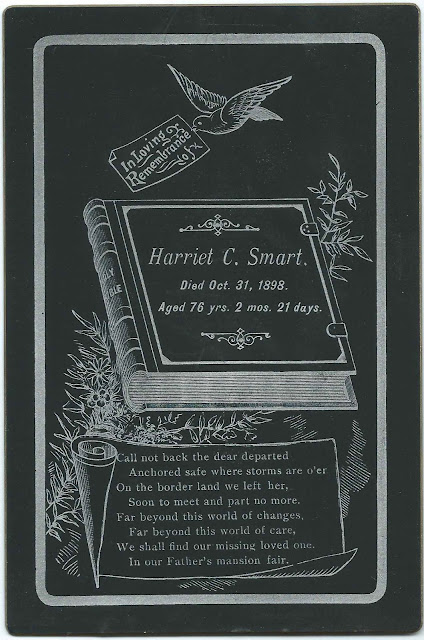 The cards were found in an album of cabinet photographs, Cartes de Visite, tintypes and memorial cards, which I thought were from the same family.  But when taking out the individual items for scanning, I noticed that some of them had antique mall markings.  Some of the items in the album have an obvious relationship, but others may have been randomly inserted to fill the spaces.  Irritating for those of us who like to tie up loose ends.

Because Harriet and George were born in New York, they may have been related to the family of J. D. Bennett, which accounts for several other photographs in the album.

Harriet Cleora Smart was born August 10, 1822 at Peru, New York.   Harriet apparently never married.  As noted on the card, she died October 31, 1898 and is buried in the Allen Cemetery at Peru, New York, with family members.

George Washington Smart was born January 19, 1824, also at Peru, New York.   At some point in the late 1850s, George, his wife Nancy (Loughrin) Smart and three sons moved to Iowa, where they were recorded in the 1860 Census of Westfield, Iowa, with an infant daughter born in Iowa.

George died on August 7, 1889 and is buried with family members in the West Union Cemetery at West Union, Iowa.

Posted by Pam Beveridge at 7:33 AM