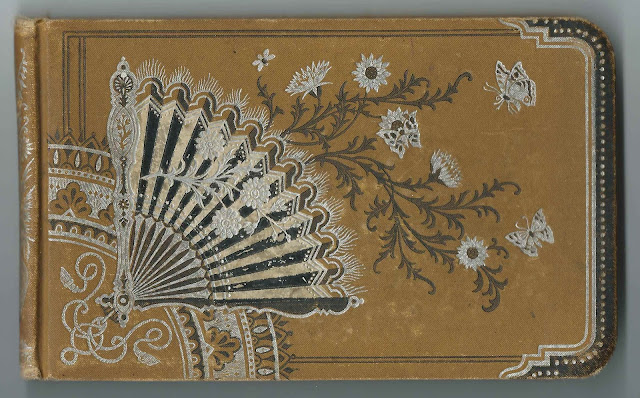 There's no ownership page, but a few pages are inscribed to Mary and to Mrs. Moore, and several inscribers mention a family relationship, all factors that lead to a presumed identity of Mary Jane (Waldron) Moore. 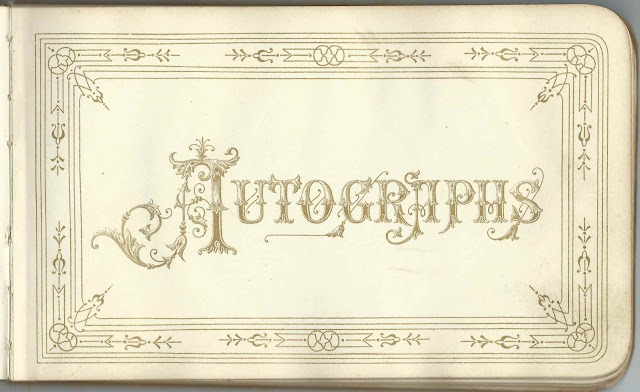 The album measures approximately 7" by 4-1/4" and contains the sentiments of 44 of Mary's relatives and friends in Maine; Lowell, Massachusetts; Manchester, New Hampshire; and Inverness, Quebec.  An alphabetical surname list and an alphabetical list of the inscribers, together with any personal information they offered, appear at the end of this post.

Assuming that Mary was Mary Jane (Waldron) Moore, her gravestone notes that she was born March 24, 1849 and died August 8, 1925.  I believe Mary was born at or near Compton, Quebec, the daughter of Thomas Waldron and Martha (Morse) Waldron.  One of Mary's siblings was Submit Waldron, "Mittie", who also made the move to Maine and three of whose children with husband Frank Richardson inscribed pages in Mary's album.

Judging from the residence of some inscribers, Mary appears to have spent time at Lowell, Massachusetts, before moving to Maine, perhaps as one of the many Canadians attracted to Lowell to work in the textile mills.  She acquired inscriptions from residents of Saint Albans, Maine, in 1881 and 1882, though the 1881 Census of Clifton, Compton, Quebec, show Mary and sister "Mittie" [Submit], living with their parents; Mary was working at a cotton factory.

On January 24, 1883, Mary J. Waldron married Charles Henry Moore, son of Samuel Moore and Mehitable (Strout ?) Moore.  Samuel was born in 1822 at Albion, Maine.  I haven't found a death record for Charles' first wife Martha (Murdough) Moore, with whom he had sons at Albion, Maine.  Charles later farmed at Saint Albans, Maine, where he, wife Martha and son Albert are listed in the 1880 Census.  One of the inscribers in Mary's album, Will Hamilton, was also living with them.

Charles may have been the C. H. Moore who inscribed a page in Mary's album at Lowell, Massachusetts, on February 14, 1881.  Was Mary then living at Lowell, and Charles also, or was Charles visiting and happened to meet Mary there?  Or perhaps C. H. Moore was someone else entirely. 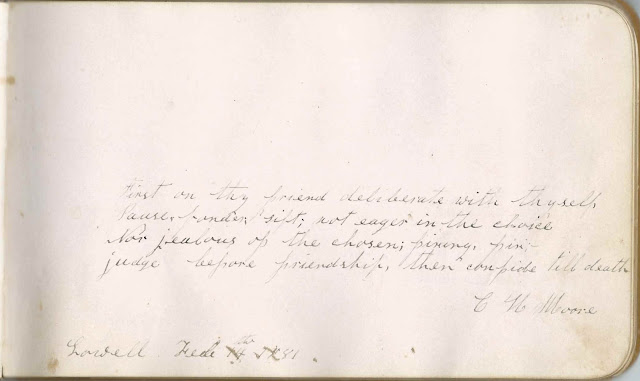 People who mentioned a relationship or could be assume to have one [see the list of inscribers for more information]:


Inscribers with the surname Mussen and Gordon of Inverness, Quebec may have been relatives of the Waldron family.  Some of the Gordon family moved to Lowell, Massachusetts.  One of them, Belle C. Gordon, inscribed a page in Mary's album. 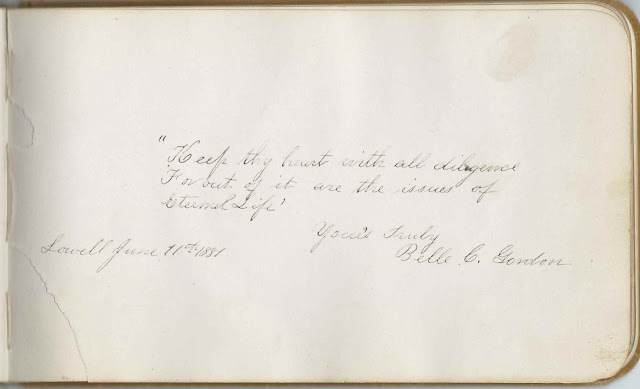 Charles Henry Moore died in 1916, and Mary in 1925.  They're buried in the Corinna Center Cemetery at Corinna, Maine.  If you have corrections, additions to the information above, or information on any of the inscribed listed below, please leave a comment or contact me directly.

Posted by Pam Beveridge at 8:30 AM