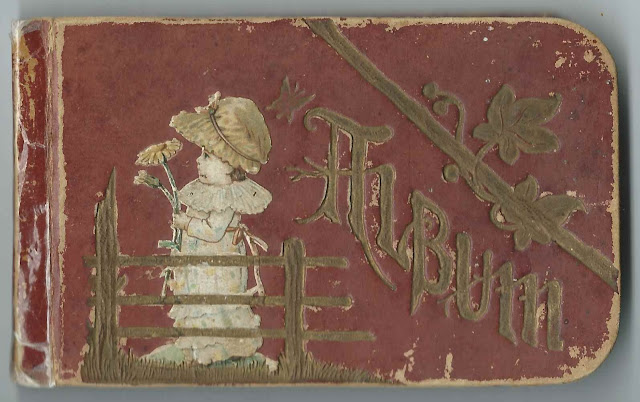 According to her California death record, Estella Harris, "Stella", was born January 1, 1882 in Illinois, and died in 1944 in Los Angeles, California.  However, her Find a Grave memorial indicates she was born February 26, 1881; she's buried in the Waverly East Cemetery at Waverly, Illinois.

Stella, the daughter of Sidney Thomas Harris and Susan Elizabeth (McPherson) Harris, is listed as Estella Harris in a 1901 University of Illinois (the Urbana-Champaign campus) publication.  Since Stella was buried at Waverly, Illinois, I'm assuming she is the Miss Estelle Harris who started a movement in 1911 for the establishment of a Carnegie Public Library at Waverly.

Two of Stella's sisters, Emma and Eunice, inscribed pages in her album in 1889.

Surnames in the album include:

Alphabetical list of inscribers, together with any personal information they offered:
A
B
C
F
H
J
M
P
W