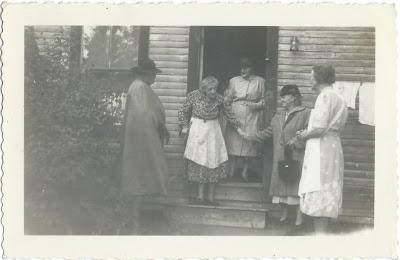 Vintage snapshot of Aunt Ethel Brown and friends of Farmington, Maine.   It would seem that the elderly lady in the apron on the steps is the focus of the photograph, so she may have been Aunt Ethel.

The photograph was found with a collection of photographs, a quantity of them from the Milo, Maine, area, and at least four of those relating to the family of George A. Jones and wife Rachel (Lawrence) Jones.

Ethel or Ethelyn married Elmer A. Brown at Worcester, Massachusetts, on April 10, 1889.  Their Massachusetts marriage record indicates that Ethel was born about 1862, the daughter of Thomas and Jane Jones of Nova Scotia, and that Elmer was born about 1861 at Vienna, Maine, the son of Moses and Ann Brown.  However, the Bent Family in America gives his parents as Merrill and Joanna (Graves) Brown. 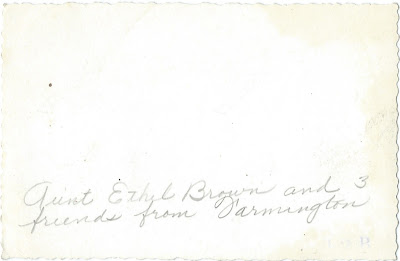 George A. Jones is presumably the George Jones shown in the photograph below. 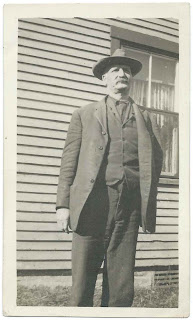 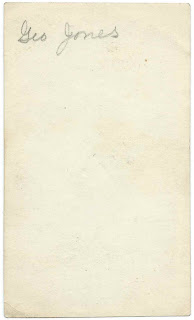 Other photographs in the collection:
The person who wrote the identification on the reverse of Aunt Edith's photograph may have been Martha (Jones) Prescott or her sister Jane Amanda Prescott.

If you have corrections and/or additions to the information above, if you recognize any of the women in the photograph, or if you feel that Edith is someone else, please leave a comment or contact me directly.

Posted by Pam Beveridge at 2:39 PM