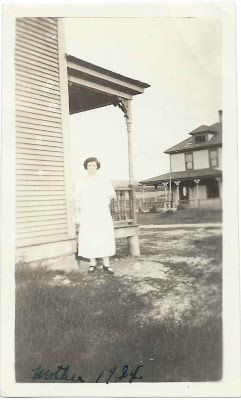 The photograph was found with a collection of photographs, mostly from the Milo, Maine, area, but with at least one taken at Aroostook Falls near Fort Fairfield, Maine, also in Aroostook County, 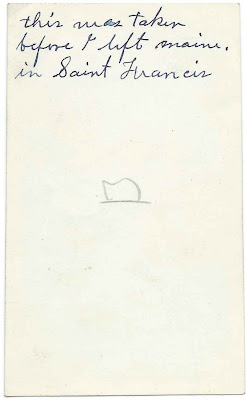 The photograph above measures approximately 4-1/2" by 2-3/4".  Hopefully a reader will recognize the house in the background and, by association, the house where "Mother" is standing.

Below is the photograph of two women, one of them identified as Mrs. Angie Webster, at Aroostook Falls.  Angie was Angie E. (Willey) Webster, daughter of John Willey and Hellen M. (Forrest) Willey and then wife of Arthur Stanley Webster, son of Hosea Webster and Mehitable (Davis) Webster.

Perhaps the woman with Angie in the photograph above is the daughter or daughter-in-law of "Mother", as the handwriting appears similar.

At some point after the 1910 Census, Angie and Arthur divorced.   On November 8, 1914 at North Stratford, New Hampshire, Angie married James Edwin Peers, son of Abel and Olive (Tilley) Peers.  James indicated on his marriage record that he was five years younger than Angie, but he was actually born February 5, 1888.

If you have corrections and/or additions to the information above, or a theory as to the identity of "Mother" and the person writing the identification, please leave a comment or contact me directly.

Posted by Pam Beveridge at 8:09 AM