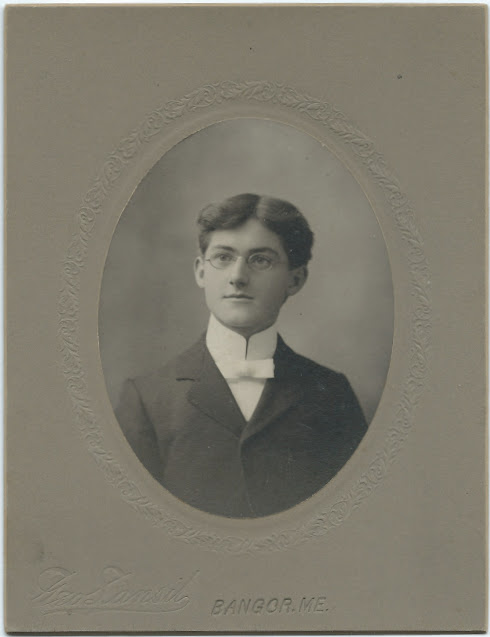 Photograph, presumably a graduation photograph, of Clarence Garland Gould of Milo, Maine, by a Bangor studio.  Clarence was a member of the Class of 1904 at Colby College at Waterville, Maine.  Alternatively, the photograph might have been taken at Clarence's graduation from a secondary institution, presumably Milo High School. 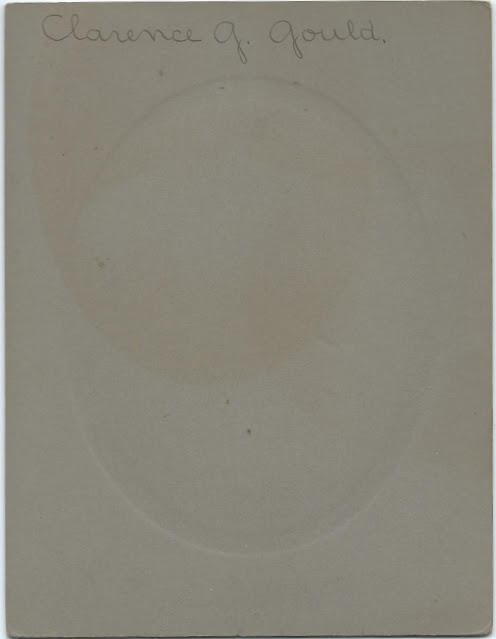 Clarence Garland Gould was born June 20, 1881 at Milo, Maine, the son of Fred Henry Gould and Servina Eliza (Sargent) Gould, "Linnie".  A Colby publication gives his mother as Alice E. (Varney) Gould, but she was the second wife of Clarence's father Fred Henry Gould, whose first wife, "Linnie", died in 1889.

Clarence became an educator in Maine, New York, and Connecticut.  His first wife, Grace Ella (Bacon) Gould, a 1903 Mount Holyoke graduate, whom he married in Connecticut in 1908, died in 1911, presumably as a result of the birth of son Charles Ebenezer Gould, who also died that year.  Grace was the daughter of Charles Ebenezer Bacon and Georgiana T. (Leach) Bacon.

On June 24, 1914, Clarence married Linda May Steele of Bristol, Connecticut, daughter of Thomas B. Steele and Jessie Keziah (White) Steele.  They had a daughter Eleanor born about 1917.

Clarence and Linda had moved to Maine by 1935, where, according to the 1940 Census, they were living at Stockton Springs, Maine.  By 1940, Clarence was teaching at a private school.  The couple had a daughter, Eleanor, born about 1917.  A 1947 Colby publication noted that Clarence had recently retired from college teaching and had moved to Sandy Point, Maine.  Clarence died in 1963.

If you have corrections and/or additions information to share, please leave a comment for the benefit of your fellow researchers.

Posted by Pam Beveridge at 7:44 AM