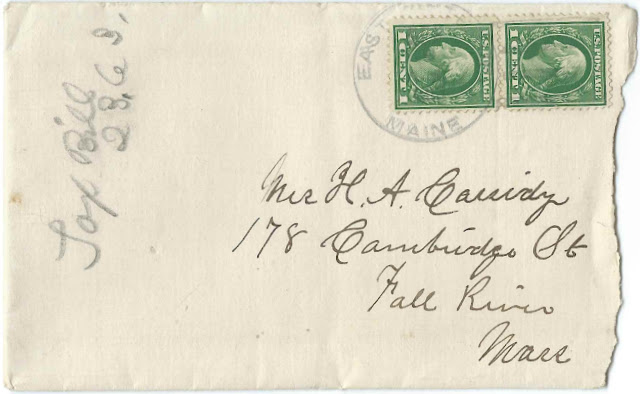 Two letters, one of them postmarked 1914, possibly written by Eva Elizabeth (Damon) Sawtelle at East Winthrop, Maine, to her daughter Susan Ilda (Sawtelle) Cassidy, wife of Henry A. Cassidy, then at Fall River, Massachusetts.

Images of the pages of the letters and loose transcriptions of each appear at the end of this post.  Please leave a comment or contact me directly with any corrections and/or clarifications, such as better identifying someone named, so that I can amend this post with the corrections and enhancements.

These letters were found with other letters and a collection of photographs, which may or may not have a connection.
From brief online research, hopefully correct in the identity of the letter writer and the associated information: [corrections and additions requested]

Llewellyn died in September 22, 1903 at Sidney, Maine. He's buried in the Sawtelle Cemetery at Sidney, Maine, along with Eva, who died in 1925, and other family members.

People mentioned, some multiple times, in the letter enclosed in the envelope shown above, dated September 8, with no year written. 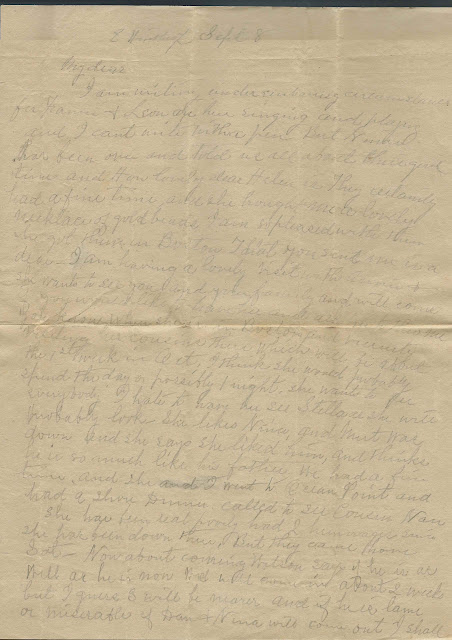 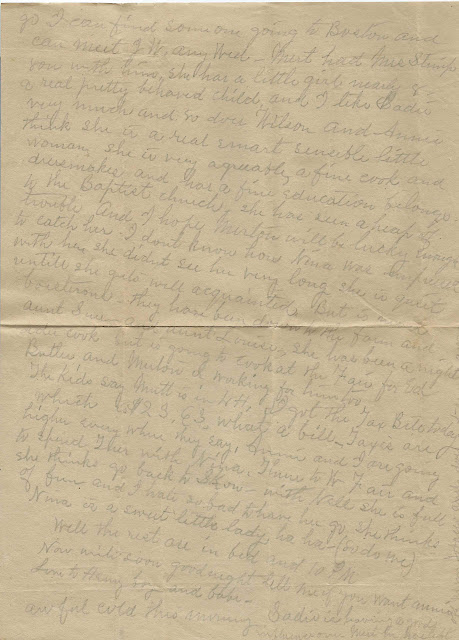 E. Winthrop, Sept 8
My dear
I am writing under embarrassing circumstances for Frances and Leon are here singing and playing and I can't write with a pen.  But Nina has been over and told me all about their good time and how lovely dear Helen is.  They certainly had a fine time and she brought me a lovely necklace of gold beads.  I am so pleased with them.  She got them in Boston.  ___ you sent me is a dear.  I am having a lovely visit with Annie & she wants to see you and your family and will come if you would like to have her and ask her through me.  You know when she is in Boston and vicinity the 1st week in Oct, I think she would probably spend the day or possibly 1 night.  She wants to see everybody.  I hate to have her see Stella as she will probably look like she likes Nina, and Mert was down and she says she liked him, and thinks he is so much like his father.  We had a fine time and she and I went to Ocean Point and had a shore dinner.  Called to see Cousin Nan.  She has been real poorly, had 2 hemorrhages since she has been down there.  But they came home Sat.  Now about coming, Wilson says if he is as well as he is now, ___ will come in about 2 weeks but I guess I will be nearer and if he is lame or miserable if Dan & Nina will come out I shall go.  I can't find someone going to Boston and can met J. W. any Wednesday.  Mert had Mrs. Stimp [not sure of surname] with him.  She has a little girl nearly 9, a real pretty behaved child, and I like Sadie very much and so does Wilson and Annie think she is a real smart sensible little woman.  She is very agreeable, a fine cook and dressmakes and has a fine education, belongs to the Baptist church.  She has seen a heap of trouble and I hope Merton will be lucky enough to catch her.  I don't know how Nina was impressed with her.  She didn't see her very long.  She is quiet until she gets well acquainted.  But is never boisterous. They have down to the farm and Aunt Suse and Aunt Louise.  She has been a night order cook but is going to cook at the Fair for Ed.  The kids say Mutt is in NH.  I got the Tax Bite today, higher everywhere, they say.  Annie and I are going to spend Thur with Nina.  Then to the Fair and she thinks go back to Skow - with Nell.  she is full of fun and I hate so bad to have her go.  She thinks Nina is a sweet little lady, ha ha (so do we).
Well, the rest are in bed and 10 P,M.  Now, write soon.  Tell me if you want Annie.
Love to Henry boy and babe.
Awful cold this morning.  Sadie is having a good influence over Mert.  He has left off tobacco and does not swear any. 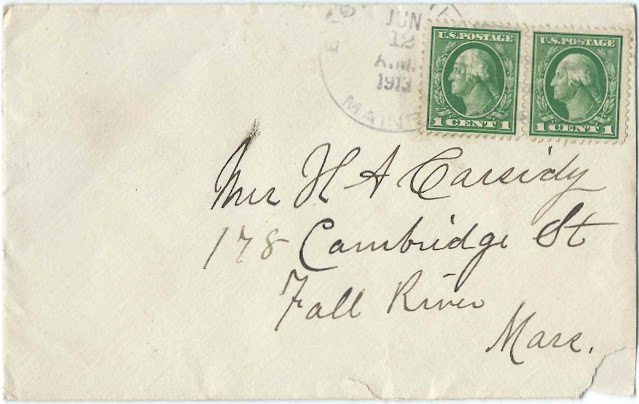 People mentioned in the letter enclosed in the envelope postmarked 1914 above, some multiple times 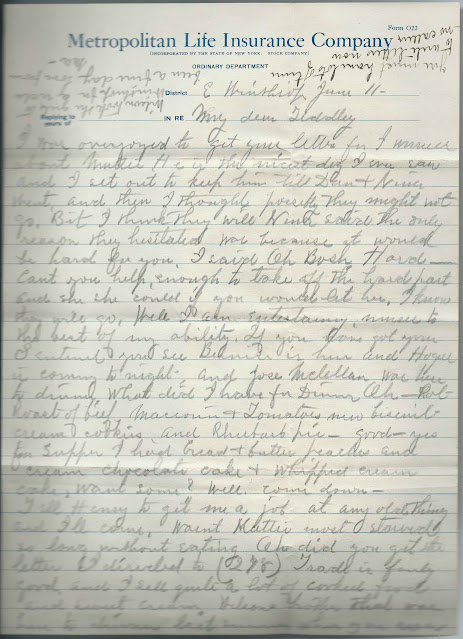 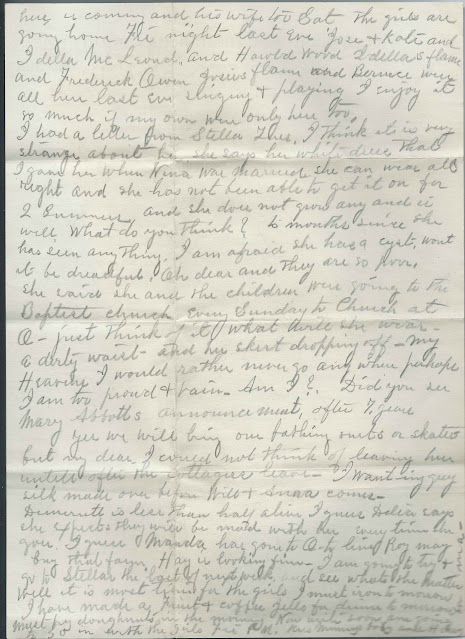 E Winthrop, June 11 , according to the postmark]
My dear Tiddley [not sure of name, but presumably a nickname for Susan Ilda (Sawtelle) Cassidy, Eva's daughter]]
I was overjoyed to get your letter for I worried about Muttie.  He is the nicest dog I ever saw and I set out to keep him till Dan & Nina went, and then I thought possibly they might not go..  But I think they will.  Nina said the only reason they hesitated was because it would be hard for you.  I said, Oh, Bosh Hard.  Can't you help enough to take off the hard part and she could if you would let her.  I know they will go.  Well, I am entertaining ___ to the best of my ability.  If you have got your Sentinel you see Bernice is here and Hope is coming tonight and Josie McLellan was here to dinner.  What did I have for Dinner.  Oh - Pot Roast of Beef, --- [possibly Macaroni] & Tomatoes, new biscuit, cream cookies, and Rhubarb pie - good - yes.  For supper  I had bread & butter pickles and cream chocolate cake & whipped cream cake, want some?  Well, come down.  Tell Henry to get me a job at any old thing and I'll come.  Wasn't Mattie most starved so long without eating.  Oh, did you get the letter I directed to 278.  Trade is fairly good and I sell quite a lot of cooked food and sweet cream.  Wilson's brother that was here to dinner last summer when you were here is coming and his wife too.  Sat.  The girls are going home Fri night.  Last eve Josie & Kate and Idella McLeod and Harold Wood, Idella's flame, and Frederick Owen, Josie's flame,  and Bernice were all here last eve singing and playing.  I enjoy it so much, if my own were only here, too.
I had a letter from Stella Tues.  I think it is very strange about her.  She says her white dress that I gave her when Nina was married.  She can wear all right and she has not been able to get it on for 2 summers and she does not grow any and is well.  What do you think?  to months since she has seen anything.  I am afraid she has a cyst - won't it be dreadful.  Oh, dear, and they are so poor.  She said she and the children were going to the Baptist church every Sunday to church at O. - just think of it.  What will she wear?  a dirty waist  and her skirt dropping off - my Heavens, I would rather never go anywhere.  Perhaps I am too proud and vain.  Am I?  Did you see Mary Abbott's announcement, after 7 years.
Yes, we will bring our bathing sits or skates but my dear, I could not think of leaving here until after the cottagers leave.  I want my grey silk made over before Will & Anna comes.
Demeritt is less than half alive, I guess. Delia says she expect they will be mad with her every time she goes.  I guess Manda has gone to O. to live.  Roy may buy that farm.  Hay is looking fine.  I am going to try and go to Stella's the last of next week and see what's the matter.  Well, it is most time for the girls.  I must iron tomorrow.  I have made a fruit & Coffee jello for dinner tomorrow.  Must buy doughnuts in the morning.  Now, write soon.  Am going to go in with the girls Fri. P.M.  Kiss Mummy's baby and Henry for Ma.

Written upside down at the top of the front page of the letter:
Wilson took the girls to Winthrop for a ride, been a fine day, Ma.
You must have lots of time to write letters now, no callers