Three Letters to Joseph Henry Abbott of Andover, Maine; 2 from his sister Lucretia L. Abbott, "Lula", in the 1880s; and 1 from Mrs. Alice (Howe) Lovejoy from Miami, Florida in 1914 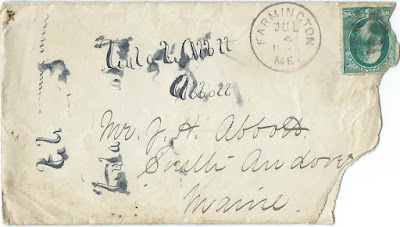 Whether there is a relationship or not, these letters were found with items relating to: 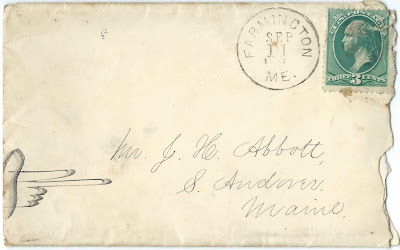 Images and loose transcriptions of the letters appear at the end of this post. 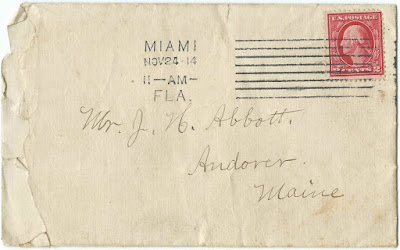 Joseph's sister Lucretia L. Abbott was born August 6, 1863, also at Rumford, Maine.  She was studying to be a teacher at the time she wrote her letters to Joseph.  The school Lula was attending was presumably Western State Normal School at Farmington, Maine, but I haven't yet found her name in any online school records or publications.

On March 10, 1891, at Somerville, Massachusetts, Lula married William Neal McCrillis, son of William and Mary S. (Watson) McCrillis.   Lula and William lived in Massachusetts for a few years but then moved to Rumford Falls, Maine.  Lula died in 1912.

As it happened, Orren's wife Florinda died in 1884 and Alice's husband Benjamin died in 1889.  About 1890, Alice and Orren married.  Further cementing the family, on March 21, 1904 at Dover, New Hampshire, Emma Alice Boynton and her stepbrother Frank Henry Lovejoy married. 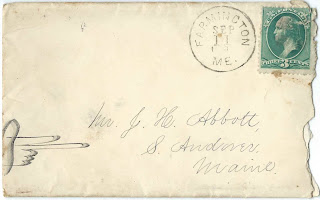 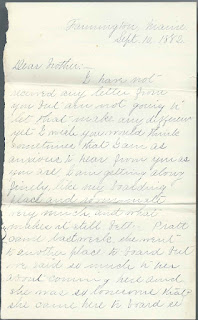 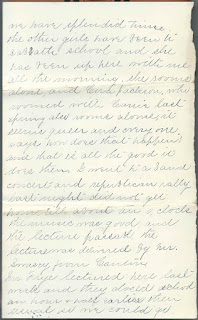 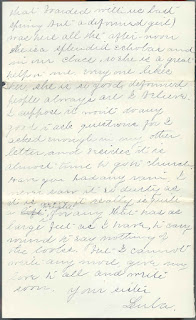 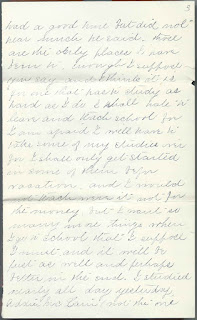 I have not received any letter from you but I'm not going to let that make any difference.  Yet I wish you would think sometimes that I am as anxious to hear from you as you are. I am getting along finely, like my boarding place and roommate very much and what makes it still better, Pratt came last week. She went to another place to board but we said so much to her about coming here and she was so lonesome that she came here to board.   So we have splendid times.  The other girls have been to Sabbath school and she has been up here with me all the morning.  She rooms alone, and Cora Jackson, who roomed with Carrie last spring, also rooms alone.  It seems queer and everyone says how does that happen?  And that is all the good it does them.  I went to a band concert and Republican rally last night, did not get home till about 10 o'clock. The music was  good and the lecture passable.  The lecture was delivered by Mr. Swasey from Canton.  Mr. Frye  lectured here last week, and they closed school and hour and half earlier than usual so we could go.  Had a good time but did not hear much he said. Those are the only places I have been to, enough I suppose, you say.  And I think it is for one that has to study as hard as I do.  I shall hate to leave and teach school for I am afraid I will have to take some of my studies over for I shall only get started in some of them before vacation and I would not teach were it not for the money.  But I want so many more things when I go in school but I suppose I must and it will be just as well and perhaps better in the end. I studied nearly all day yesterday. Addie McLarin (not the one that boarded with us last spring but a deformed girl) was here all the afternoon. She is a splendid scholar and in our class, so she is a great help to me. Everyone likes her.  She is so good.  Deformed people always are, I believe.  I suppose it won't do any good to ask questions for I asked enough in my other letter and, besides, it is almost time to go to church. Have you had any rain? I never saw it so dusty as it is now.   it really is quite a weight for for any that has as large feet as I have to carry around, to say nothing of the looks.  But I cannot write anymore. Give my love to all and write soon.
Your sister Lula 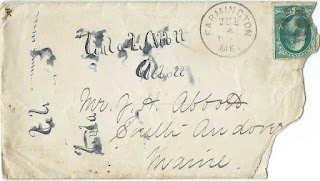 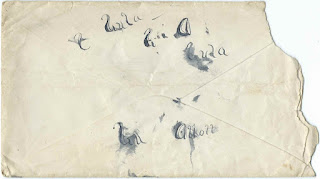 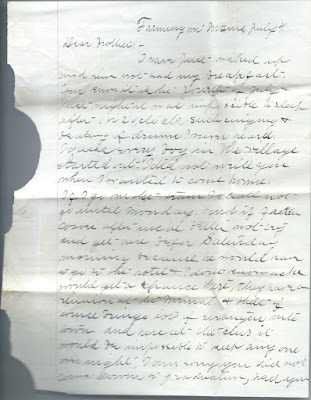 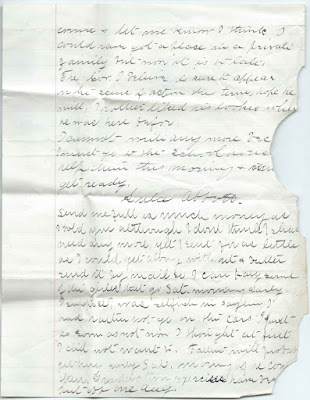 I have just waked up and have not had my breakfast.  You know it is the Fourth of July and last night it was impossible to sleep. After 1 or 2 o'clock, such singing and beating of drums I never heard.  I guess every boy in the village started out.  I did not write you when I wanted to come home.  If I go on the train I shall not go until Monday.  And if Father comes after me he better not try and get here before Saturday morning because he would have to go to the hotel and I don't know if he would get a chance there. They have a reunion at the Normal and that of course brings lots of strangers into town.  And here at the club it would be impossible to keep anyone over night. I am sorry you did not come down to graduation. Had you come and let me know, I think I could have got a place in a private family. But now it is too late. The Cor. [?] I believe is sure to appear on the scene of action this time.  Hope he will I rather liked his looks when he was here before.
I cannot write anymore because I must go to the school house help them this morning and get ready.
Lula Abbott
Send me full as much money as I told you although I don't think I shall need any more; yet I sent for as little as I could get along without and better send it by mail so I can pay some of the girls that go Saturday morning early. I suppose I was selfish in saying I had rather not go on the car.  I just as soon as not now.   I thought at first I did not want to.  Father will probably get here early Saturday morning if he comes then.  Graduation exercises have been put off one day.

How are you this beautiful evening?  Today marks another milestone in your life.  I wanted to write so you’d receive it on your birthday anniversary but have been very busy getting settled in our new home. I wish you a very happy and prosperous year and many of them.  I hope you will be well.  The day we started from home we wore our heavy winter clothes and a fur coat over all and were not a bit too warm.  Tonight we are sitting on our open but screened in porch in our thin muslin dresses and no wraps.  We started from Maine Nov. 4, stayed in Lynn that night.  Went on board the boat Nov. 5th at 5 o’clock P.M.  We arrived in Philadelphia at 6 o’clock Sat. A.M.  We spent a delightful day sight seeing.  We visited the Mint, Independence Hall, Museum of Relics of Revolutionary days and the Betsey Ross house where the first American flag was made.  I wanted to visit the city hall but we had not time.
We took another steamer that P.M. and arrived in Savannah Tuesday A.M. Nov. 10.  We visited city hall and several of the beautiful parks but were too tired to visit many places.

We took the boat that night for Jacksonville and arrived there at 6 o'clock Wednesday A.M.  We were all too tired to go around, only to find something good to eat.  At 1:30 p.m. we took the train for Miami and arrived at 2:30 A.M.

Nov. 12th - My, but we were tired.  We are just three miles from the city.  There are most lovely drives here.  I can't describe the beautiful sights and fruits of all kinds grown here.  Our neighbors seem very kind and friendly and so generous with their fruits and vegetables.  They are all Northern people, but only one man from dear old Maine.  When he came here there were about four houses, the rest woods and jungle.  Everyone calls him “Daddy” in terms of affection He and his wife have helped us lonely Lovejoys in many ways.   We stayed at their house two nights before our camp was ready.  I like here as well as I expected to.

William Jennings Bryan has a lovely home near here on Biscayne Bay. He spoke in the Congregational Church yesterday.  I did not intend to write you such a long letter but when I get to talking to you I say too much.  I don't like the taste of the water here.  It is hard and warm and tastes salty to me.

Delmar and Kenneth started in going to school today. Kenneth is 9 years today, bless him.  The boys think Emma has gained quite a lot.  Tell me about yourself and everybody I know. Take care of yourself.  How is Frank?

Please excuse pencil but I have no ink but wanted to tell you I remembered your birthday anniversary.
Mrs. Alice H. Lovejoy
Mimai, Florida  [did she mean Miami?]
R.F.D. No. 1
℅ A. T Bryant
I hope you can read this

Alice wrote a note on the back of the envelope. 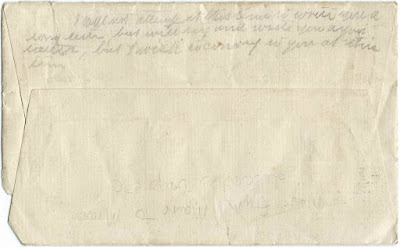 Posted by Pam Beveridge at 3:26 PM