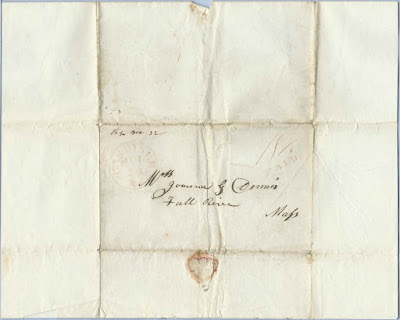 The letter is comprised of a large sheet, folded, with letter content on one pane and the address side on the reverse pane.  A transcription appears at the end of this post.

I don't know if there is a relationship or not, but this letter was found with items relating to 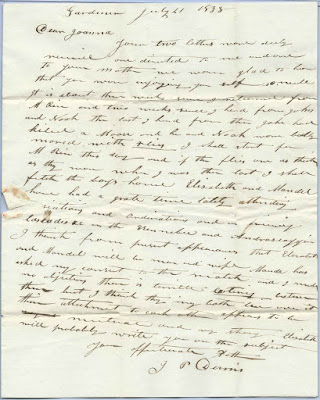 A good portion of the letter relates the growing relationship between John's daughter Elizabeth and Mandel.  Elizabeth D. Dennis did marry, but she married Solomon Wheaton Bates on November 25, 1844.  Perhaps he was known as "Mandel", or perhaps not.  In another section, John reports that John had killed a moose and that John and Noah were being pestered by flies, presumably black flies or mosquitoes.  There are a couple references to M River, which might be the Moose River or Moxie Stream or perhaps the Magalloway River.

Daughter Joanna G. Dennis was born in 1813.  She died at Portland, Maine, on September 8, 1895 and is buried in Evergreen Cemetery there, with her brother John and members of his family.

Gardiner, July 21, 1838
Dear Joanna,
Your two letters were duly received, one directed to me, and one to your mother.  We were glad to hear that you were enjoying yourself so well.  It is about three weeks since I returned from M River, and two weeks since I heard from John and Noah. The last I heard from them, John had killed a moose, and he and Noah were badly moved with flies.  I shall start for M River this day, and if the flies are as thick as they were when I was there last, I shall fetch the boys home.
Elizabeth and Mandel have had a great time lately attending orations and ordinations, and in viewing cascades on the Kennebec and Androscoggin.  I think from present appearances that Elizabeth and Mandel will be man and wife.  Mandel has asked my consent to the match, and I made no objections. There is terrible ___ between them but I think ____ both ___ over it.  Their attachment to each other appears to be mutual and very strong.  Elizabeth will probably write you on the subject.
Your affectionate Father,
J. P. Dennis