c1860 Letter from to "Hat" from "P. M.", Who Was Teaching Piano and Boarding at Perkins Hotel, Presumably Lyme, New Hampshire 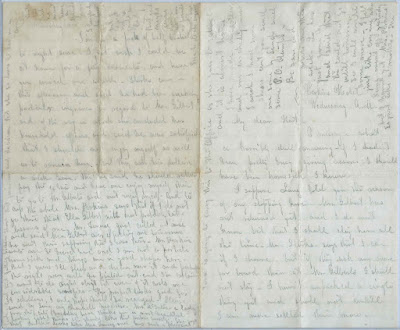 Note of August 14, 2015:  See the comment section where a reader has forwarded information on the Perkins Hotel and several of the people mentioned in the letter; he found that there were people of that name living at Lyme, New Hampshire, which also had a Perkins Hotel.

Circa 1860 letter to "Hat" from "P. M.", presumably a woman, away from home teaching piano.  One sheet, folded into four panes, with every inch covered in handwriting, margins and top included.  Thanks to a reader who found that the Perkins Hotel was likely the one at Lyme, New Hampshire, and considering the age of Emma Perkins, then age ten, it appears that the letter was written about 1860 or 1861.

P. M.'s comments about the quality of the piano at the Perkins Hotel and the "scraping" and "screeching" of two visiting violinists are especially amusing.

Sadly, there's no accompanying envelope, and no place names were included, though I believe that it might have been a rural place, perhaps a vacation spot.  She wrote the letter from Perkins Hotel, but that might have meant a boarding house or even a private home that took her in, at first temporarily, but perhaps permanently.

[Note: Thanks to a reader's research, it appears that this was likely the Perkins Hotel at Lyme, New Hampshire]

See images of the panes and a transcription at the end of this post.  If you have a theory as to the letter writer's identity or corrections and/or additions to the transcript, please leave a comment or contact me directly.

Perkins Hotel
Wednesday A.M.
My dear Hat
O misery - what a horribly dull morning - if I hadn't been pretty busy giving lessons I should have been homesick, I know.
I suppose Lang [?] told you the reason of my stopping here - Mrs. Gilbert has not returned yet, and I do not know but that I shall stay here all the time.  Mr. Stirks [?]  says that I can if I choose - but if they ask any more for board than at Mr. Gilbert's, I shall not stay - I haven't unpacked a single thing yet and shall not until I am more settled than now. [continued on Pane 2]

[Written along the left edge and top of Pane 1]:  Lora is going to carry this to the Office as she goes to school and it is almost __ [?].    I have made my collar and am crocheting now.  I wish I had some shoes.  Can't you send me some by Lang [?] and some P.O. stamps.  Be sure and write me this week.  Lo has just gone by and said that this could not go until tomorrow so I will write some more.  I felt just like crying when Lang went off yesterday but I haven't yet.  Mrs. Perkins is just like a mother.  She [continued on left edge of Pane 2]

I have a very pleasant room indeed and good accommodations every way except that horrid old Piano.  I attempted to practice a little this morning but left perfectly disgusted after playing a few pages.  But t'is good enough to give lessons on - and if I stay here I shall not bring one particle of my music down and then I shall not be obliged to play to anyone on it - Mrs. Gilbert and Miss Grant have taken lessons this morning and I expect three more this afternoon.  I am going to call on Mr. Stirk and tell him that I must have more scholars.  He came in to see me three times yesterday.  Lo and Elsie were in twice.  Mrs. Tenney, Mrs. Pushee, Miss Gilbert, Miss Grant and another lady that I do not know her name called yesterday.  I never saw such a lot of fat, dumpy girls before.  And last evening there were six gentlemen came [continued on Pane 3]

in.  Two of them were Pushees and had violins.  They commenced playing soon after they got in - and such a scraping and screeching I never heard before - One fellow named Briggs attempted to be quite agreeable to me but I was not disposed to be very communicative and took the earliest opportunity to plead as an excuse for leaving a severe headache and retired.  They stayed and played till after ten of the clock - It sounded beautifully up in my room after they began to sing and play the Piano with the accompaniment of violins.  Clary Pushee and Mrs. Perkins sang.  Clary is a beautiful alto singer.  Mrs. Perkins is not much.
P.M.
I have eaten dinner and given Emma Perkins a lesson.  She is but ten years and is equal to Olive in learning - I must not write much more for [continued on Pane 4]

[Written on the left edge of Pane 3]:  Tell Ed to come down next week - and you come, too.  Tell any one to come

I'm in a peck of half bushels tonight sure.  I just wish I could be at home for a few moments and have you counsel me a little.  Stirks came in this afternoon and said he had been making particular inquiries in regard to Mrs. Gilbert and the way in which she concluded her household affairs, and said he was satisfied that I should not enjoy myself as well as to remain here, but they ask two dollars a week here.  Tho he said he should rather pay the extra and have me enjoy myself than to go to Mrs. Gilbert's and not enjoy myself.  And to cap the whole Mrs. Perkins says that if I do not go there that Ella Gilbert will not probably take lessons of me.  Mr. Tenney just called on me and said Mrs. Gilbert was expecting me tomorrow.  He went there supposing that I was there.  Mrs. Perkins wants me to board here and I am not a __ [?] homesick and things are in good shape here.  But I guess I'll sleep and dream over it and perhaps the right way will be pointed out and I'm certain I want to do right about it even if it costs one considerable sacrifice.  The prospect looks good for 9 scholars, I only hope will be realized.  Please send by Lang my chennille headress.  Mrs. McIntyre, a lady from the city boarding here, thinks you a most beautiful looking girl! Thinks she should like that picture herself.  She says that mother looks like Mrs. Tenney and has such a pleasant

[continued along the left side and top of Pane 4]
look and that father's picture shows that firmness and decision that she so loves to see in a man.  She thinks too that he must have a splendid form.  I laughed to hear __ [?] but I expect she is quite a lady.   But good night .  Come down as soon as possible.
Love [possibly not Love, but Sue or Lue]
Love to all who inquire.

Again, if you have a theory as to the identity of any of the people mentioned in this letter, or if you have corrections and/or additions in the transcription, please leave a comment or contact me directly.  Thanks!

Posted by Pam Beveridge at 9:23 AM