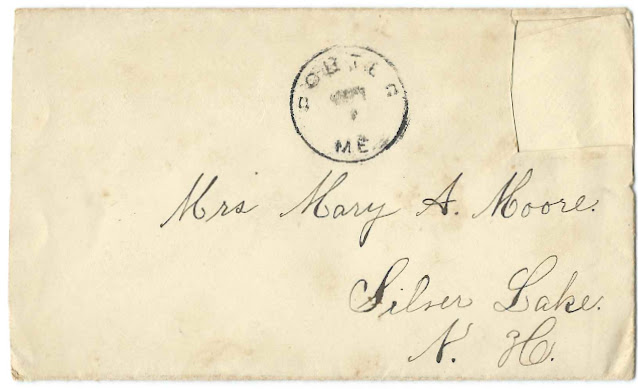 Three letters written by Mary R. Knox at Porter, Maine, to Mrs. Mary A. Moore of Silver Lake, New Hampshire, a village in the town of Madison. Images and transcriptions appear farther below.

I believe Mrs. Mary A. Moore was Mary Ann (Kenerson) Moore, wife of Edgar Herbert Moore and daughter of William and Sophia (Drew) Kenerson.  The Martha mentioned in one of the letters was presumably her older sister Martha Sophia Kenerson, who, by the time of the letters, had married George Amasa Nickerson.

Clues in the letters:

If you have information on either Mary A. Moore or Mary R. Knox, or if you find I've made an error in the transcriptions below, please leave a comment or contact me directly.

Letter #1 [its envelope is shown at top].  Mary describes her loneliness and the fairly recent loss of three family members. 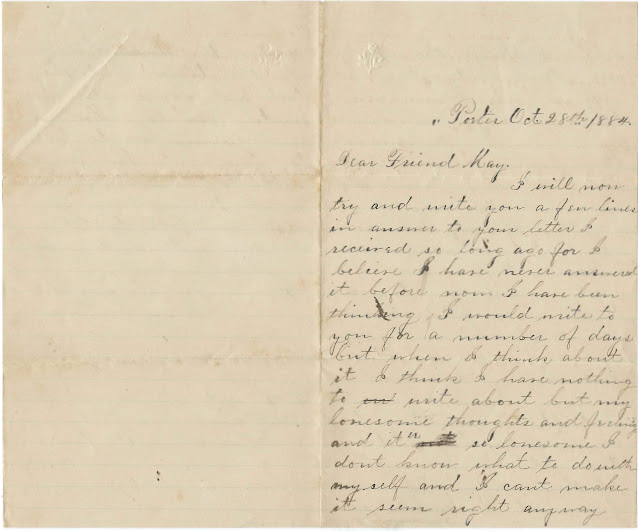 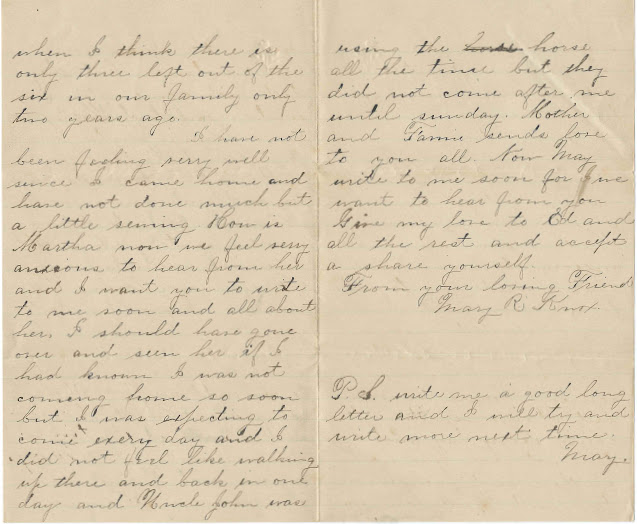 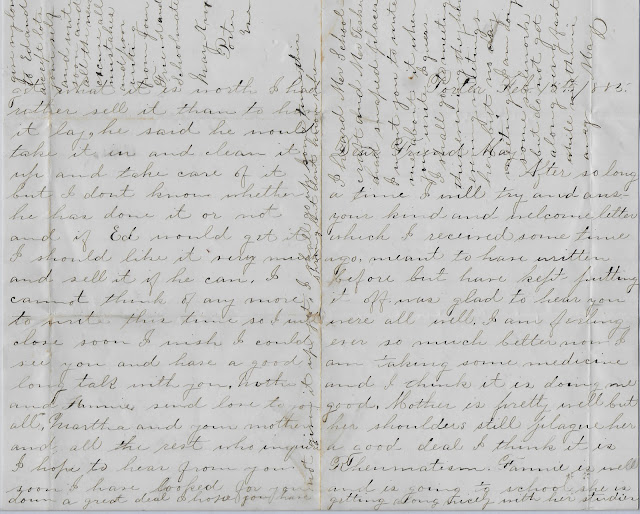 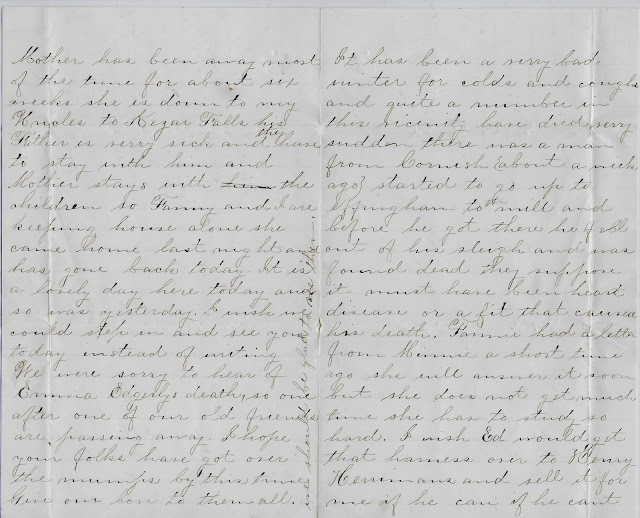 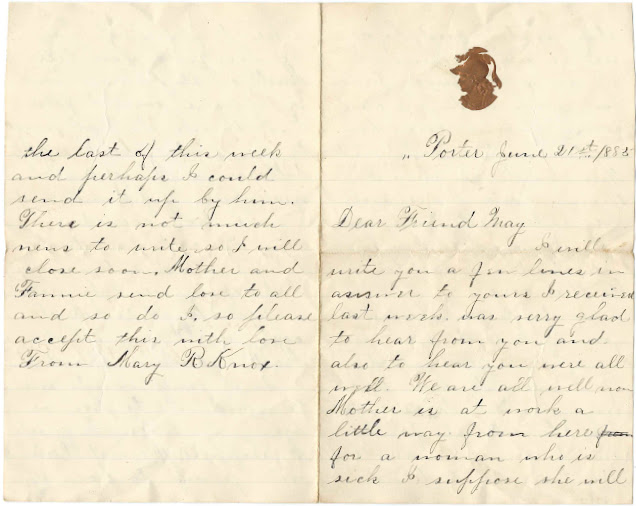 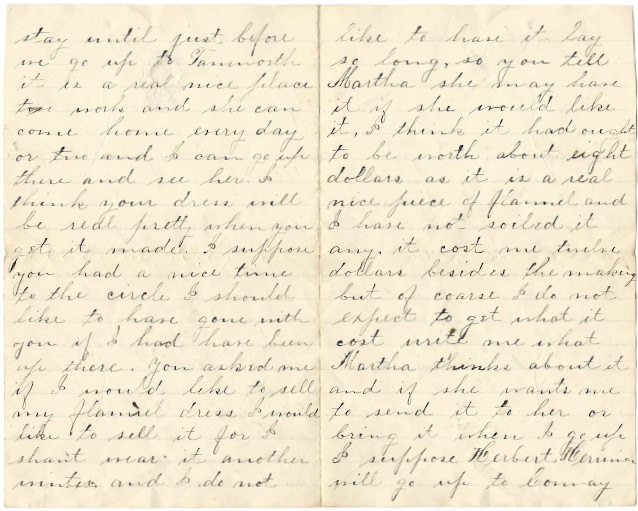 Porter, Oct. 28th, 1884
Dear Friend May,
I will now try and write you a few lines in answer to your letter I received so long ago for I believe I have never answered it before now.   I have been thinking I would write to you for a number of days but when I think about it I think I have nothing to write about but my lonesome thoughts and feelings and it is so lonesome I don't know what to do with myself and I can't make it seem right anyway.  when I think there is only three left out of the six in our family only two years ago.
I have not been feeling very well since I came home and have not done much but a little sewing. How is Martha now.  We feel very anxious to hear from her and I want you to write to me soon and all about her.  I should had gone over and seen her if I had known I was not coming home so soon but I was expecting to come every day and I did not feel like walking up there and back in one day and Uncle John was using the horse all the time but they did not come after me until Sunday.  Mother and Fannie sends love to you all.  Now May, write to me soon for we want to hear from you.  Give my love to Ed and all the rest and accept a share yourself.
From your loving Friend
Mary R. Knox
P.S.  write me a good long letter and I will try and write more next time.
Mary

Transcript of letter #2
Dear Friend May
After so long a time I will try and answer your kind and welcome letter which I received some time ago, meant to have written before but have kept putting it off. Was glad to hear you were all well. I am feeling ever so much better now. I am taking some medicine and I think it is doing me good. Mother is pretty well but her shoulders still plague her a good deal. I think it is Rheumatism. Fannie is well and is going to school. She is getting along nicely with her studies.
Mother has been away most of the time for about six weeks. She is down to my Uncles to Kezar Falls. His Father is very sick and they have to stay with him and Mother stays with the children so Fanny and I are keeping house alone. She came home last night and has gone back today. It is a lovely day here today and so was yesterday. I wish we could step in and see you today instead of writing. We were sorry to hear of Emma Edgerly's death, so one after one of our old friends are passing away. I hope your folks have got over the mumps by this time. Give our love to them all and should be glad to see them.
It has been a very bad winter for colds and coughs and quite a number in this vicinity have died very sudden. There was a man from Cornish (about a week ago) started to go up to Effingham to the mill and before he got there he fell out of his sleigh and was found dead. They suppose it must have been heart disease or a fit that caused his death. Fannie had a letter from Minnie a short time ago. She will answer it soon but she does not get much time she has to study so hard. I wish Ed would get that harness over to Henry Herriman's and sell it for me if he can. If he can't get what it is worth, I had rather sell it than to have it lay. He said he would take it in and clean it up and take care of it, but I don't know whether he has done it or not and if Ed would get it I should like it very much and sell it if he can. I cannot think of any more to write this time so I will close soon. I wish I could see you and have a good long talk with you. Mother and Fannie send love to all, Martha and your Mother and all the rest who inquire. I hope to hear from  you soon. I have looked for you down a great deal. I hope you not given it up yet. I should go up some time this Spring but don't know when.
Give my love to Edward, accept lots for yourself and write soon and all the news. Excuse all mistakes from writing. From your Friend and Schoolmate.
Mary Knox
Porter Me.
I heard Mr. Schoolcraft and Mr. Tasker had swapped places. I want you to write me about it when you write. I guess I shall go to meeting this evening. They have evenings meetings here but no day. I am doing some salework but  do not get along very fast while Mother is away. Mary
Transcript of letter #3

I will write you a few lines in answer to yours I received last week. Was very glad to hear from you and also to hear you were all well. We are all well now. Mother is at work a little way from here for a woman who is sick. I suppose she will stay until just before we go up to Tamworth. It is a real nice place to work and she can come home every day or two and I can go up there and see her. I think your dress will be real pretty when you get it made. I suppose you had a nice time to the circle. I should like to have gone with you if I had have been up there. You asked me if I would like to sell my flannel dress. I would like to sell it for I shan't wear it another winter and I do not like to have it lay so long, so you tell Martha she may have it if she would like it. I think it had ought to be worth about eight dollars as it is a real nice piece of flannel and I have not soiled it any. It cost me twelve dollars besides the making but of course I do not expect to get what it cost. Write me what Martha thinks about it and if she wants me to send it to her or bring it when I go up. I suppose Herbert Harriman will go up to Conway the last of this week and perhaps I could send it up by him. There is not much news to write so I will close soon. Mother and Fannie send love to all and so do I, so please accept this with love.
From Mary R. Knox