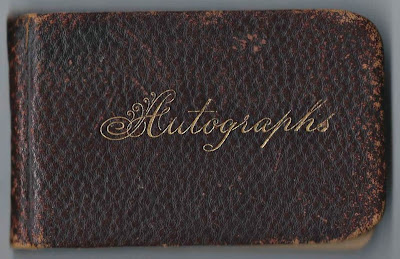 1880s autograph album of Ezoa Jenkins of Susquehanna County, Pennsylvania.  I found her given name as Ezoica and as Annie Ezoa and Ezoa Annie. 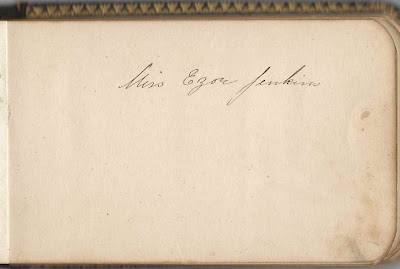 The album is approximately 5-1/2" x 3-1/2" and contains 40 pages signed by Ezoa herself (or the person who presented her with the album), her relatives and friends.  An alphabetical list of the signers appears at the end of this post. 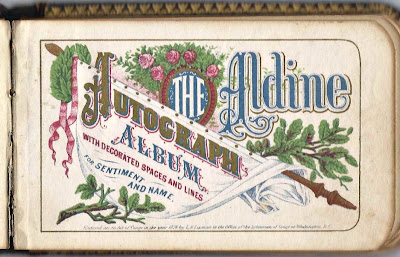 Ezoa Jenkins was born 6 August 1878 at Thompson, Pennsylvania, the daughter of Henry and Jane A. (Legg) Jenkins.  I don't have information on Henry, but there were some people named Jenkins who signed pages in Ezoa's album, other than her brother Earle and herself.

Ezoa's maternal grandparents were Samuel Legg and his second wife Rhoda Anna.  Jane may have been the only child from this marriage, but there were several children from Samuel's first marriage to Mary Parminter, including at least two who signed pages in Ezoa's album [see below].

The couple lived in Susquehanna County, Pennsylvania.  Elbert was a merchant.  If they had children, they weren't mentioned in the Censuses.

As mentioned above, Ezoa's brother Earle W. Jenkins signed a page in her album. 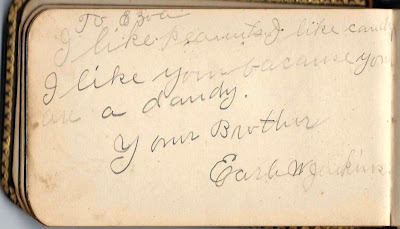 Ezoa's Uncle Ike, who may have been Isaac Legg, a half brother to Ezoa's mother Jane A. (Legg) Jenkins, signed a page.  It was this page that gave me the clue that Ezoa also had the name Annie. 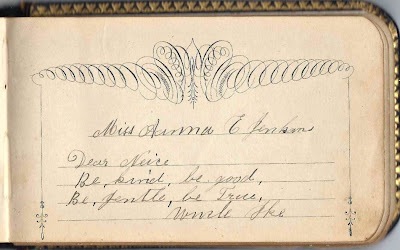 Mrs. Anna V. Mumford signed a page on 4 February 1888 while she was at Philippopolis, Bulgaria.  This was Anna Victoria Legg, another half sibling to Ezoa's mother Jane A. (Legg).  Mrs. Anna Victoria (Legg) Mumford was the widow of Oliver Mumford, who died in the Civil War while leading a charge at Petersburg. 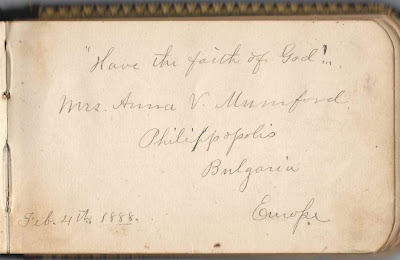 Another aunt signed a page in Ezoa's album.  She was Anna Malpass, second wife of Daniel Malpass, of Susquehanna County, Pennsylvania.  I researched to see if Anna might have been a sister to Ezoa's father Henry Jenkins, but wasn't able to establish a relationship.  Hopefully a reader will have more knowledge and will leave a comment.  Anna's husband Daniel Malpass also signed a page.  He dated his page 23 February 1889. 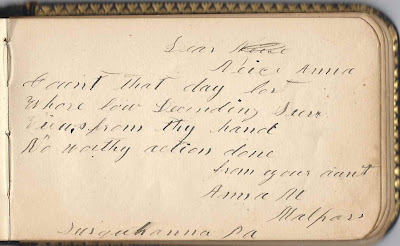 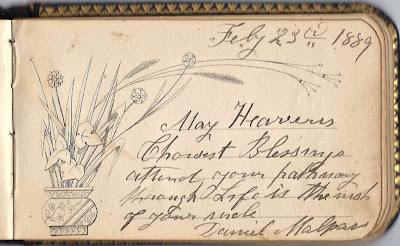 Kate M. Jenkins of Susquehanna County, Pennsylvania, signed a page in Ezoa's album.  I found a Kate M. Jenkins married to a William Jenkins.  I wonder if William and Ezoa's father Henry Jenkins were related, perhaps even brothers. 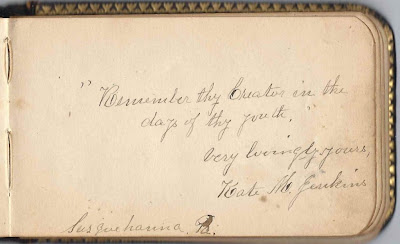 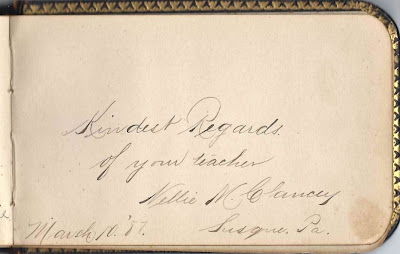 A. N. Brundage signed page on 3 November 1890.  Ezoa was married by then, but perhaps A. N. Brundage was a teacher from Ezoa's past schooling or was a Bible study teacher. 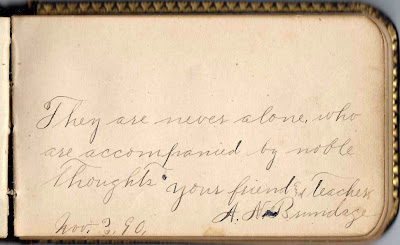 Thompson, Pennsylvania [some signers spelled it as "Thomson"]

Posted by Pam Beveridge at 8:10 AM