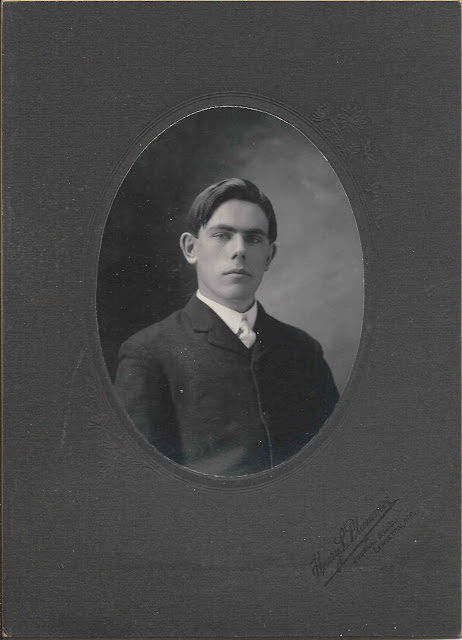 [Note: this post has been amended to include clarifying information from Reader Ed.]

Photograph of a young man identified on the reverse as Roscoe H. Hupper, H. A., '04, Martinsville, Maine.  Martinsville is a village in St. George, Maine.  Reader Ed has discovered that H. A. referred to Hebron Academy at Hebron, Maine. 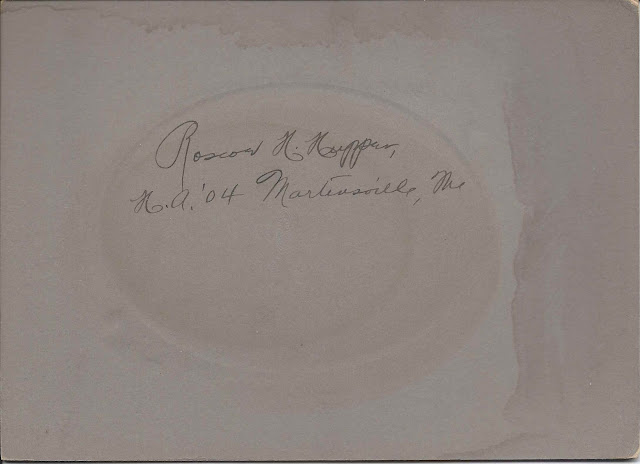 Note: a reader states that Roscoe's maternal grandparents were Steven Seavey and Jean Hawthorne.  If you're a relative, see the comments section, as the reader notes that there's other information to share.

I don't have the names of Roscoe's maternal grandparents, but there was a Mary Alden who lived at Hampden, Maine, the daughter of Augustus and Sarah Alden, born about the same year as various Censuses show as the birth year of Mary (Alden) Hupper.   Hopefully a reader will share information to solve the mystery.

Reader Ed provided a link to an article in the Lewiston [Maine] Evening Journal about the 1904 Hebron Academy commencement.  Roscoe was the valedictorian.

After graduating from Hebron Academy, Roscoe went on to Bowdoin College and George Washington Law School, from which he graduated in 1910.  He became one of the foremost admiralty lawyers of his day.  He's mentioned in the book The Life and Century of Charles C. Burlingham, New York's First Citizen 1858-1959, by George Martin.

Roscoe donated a first edition of James Audubon's bird prints to Bowdoin College in memory of his mother Mary (Alden) Hupper.  It's on display at the George J. Mitchell Department of Special Collections and Archives, at the Hawthorne-Longfellow Library.  A similar copy recently sold for $7.9 million.

Bowdoin College conferred upon him an honorary Doctor of Laws. Read a brief write-up here.

The couple lived at New York City and Martinsville, in St. George, Maine.  They had three sons:

If you have corrections and/or clarifications to the information above, please leave a comment or contact me directly.  Thanks!