1911 Memorial Booklet upon Death of Francis Hardon Burr of Massachusetts 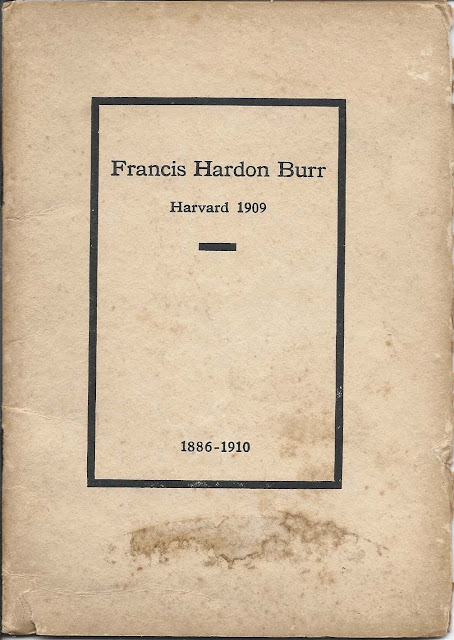 Memorial Booklet printed in 1911 by the Harvard Law School classmates of Francis Hardon Burr, who died of typhoid fever at Des Brisay Hospital at Boston, Massachusetts on 4 December 1910. 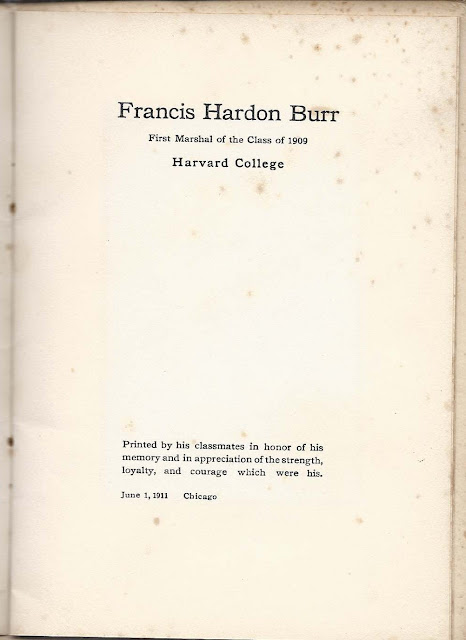 Printed by his classmates in honor of his memory and in appreciation of the strength, loyalty, and courage which were his. 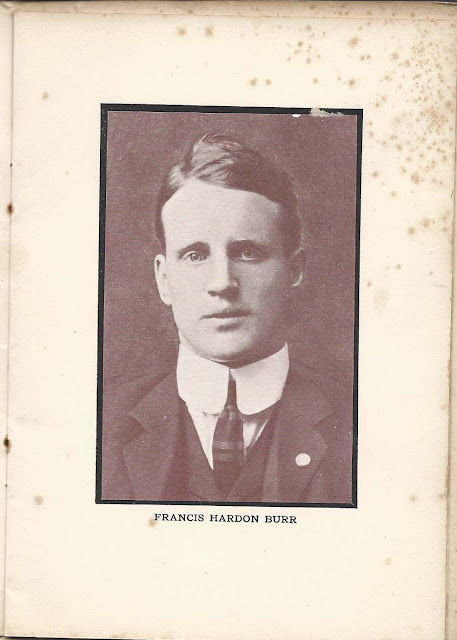 Francis spent his early years at Chestnut Hill, with two years at Berlin, Germany.  His family summered at Castine, Maine.  He attended Noble and Greenough's School in Boston and then received acceptance to Harvard University.

Because he had advanced scholastically ahead of his years, his family decided to spend a year in Europe before he entered Harvard.  He contracted a fever in Holland and was not well enough to enter Harvard on schedule.  Instead, he spent some time at Phillips Andover Academy.

When he did enter Harvard, he was a standout student, leader and athlete, though susceptible to illness.  He didn't play football his first three years but when he did, he was elected captain of the team.  He was elected First Marshall of the Class of 1909.

During the fall of 1910, while at Harvard Law School, he contracted typhoid fever and died two months later in December.

From the Harvard Crimson, issue of 15 January 1914, regarding the establishment of the Francis Hardon Burr Scholarship:

The University has received the sum of $7,500 with which to establish a scholarship in memory of Francis Hardon Burr, '09. The wishes of the donors are set forth as follows in the terms of the gift:
"This fund is to be known as the Francis H. Burr 1909 Fund, and the yearly income therefrom is to be used in helping deserving undergraduates who combine as nearly as possible Burr's remarkable qualities of character, leadership and athletic ability.
"The recipient must be in need of financial assistance. He shall be chosen in the middle of his third year by the Dean of the College and the Chairman of the Athletic Committee. Announcement of the award is to be made at that time and the gift is to be applied in his fourth year."
Will [while?] an undergraduate Burr was a leader in scholarship, athletics and social affairs. He won his "H" in football and baseball and was captain of the Harvard nine in 1908. He was president of his class in his Freshman year, and First Marshal on its Class Day. In the autumn of 1910 he was taken ill with typhoid fever and died on December 4.
The fund was raised principally from the members of Burr's class, but some of his older friends also contributed. The committee in charge of the project was made up of three classmates: John W. Cutler, Lawrence K. Lunt, and Nathaniel S. Simpkins Jr.
If you have any corrections to the information presented above, please leave a comment or contact me directly. 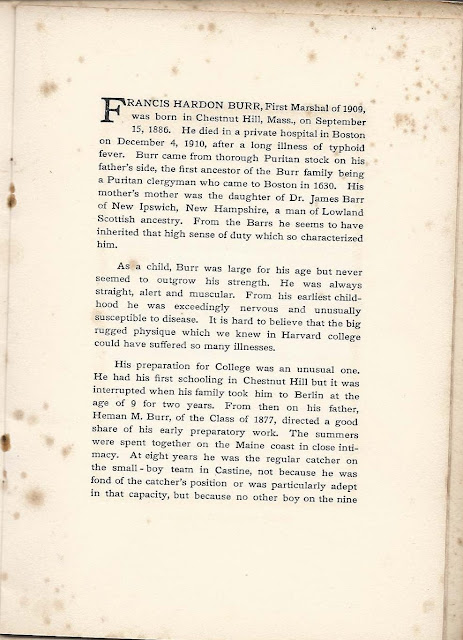 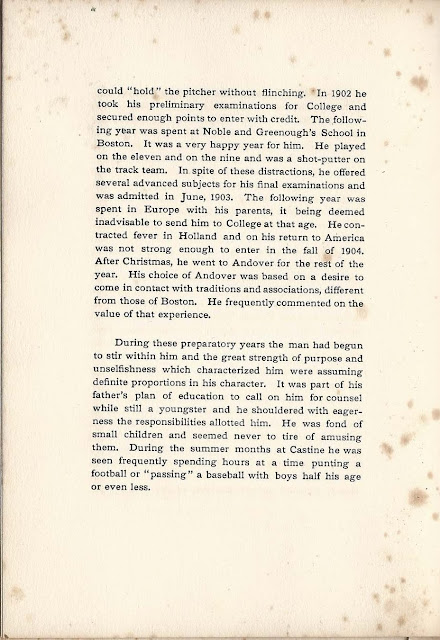 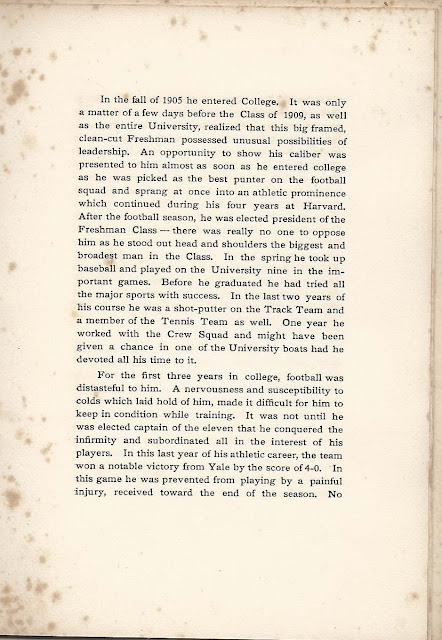 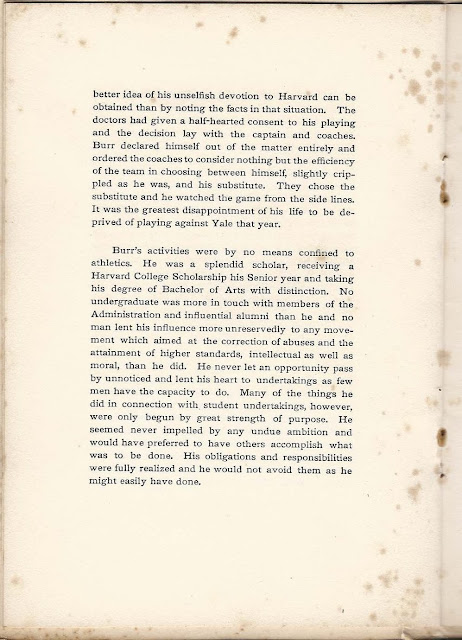 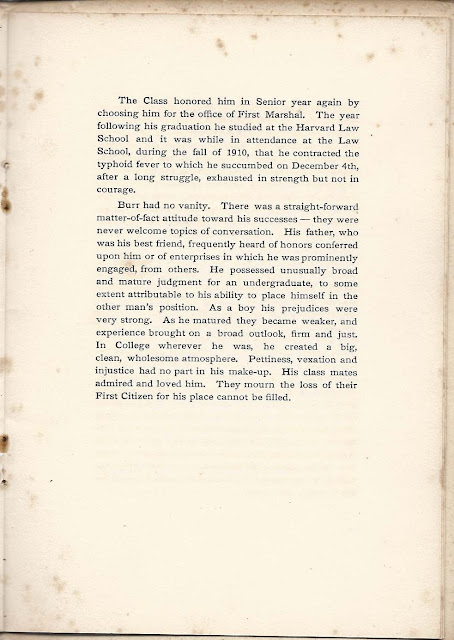 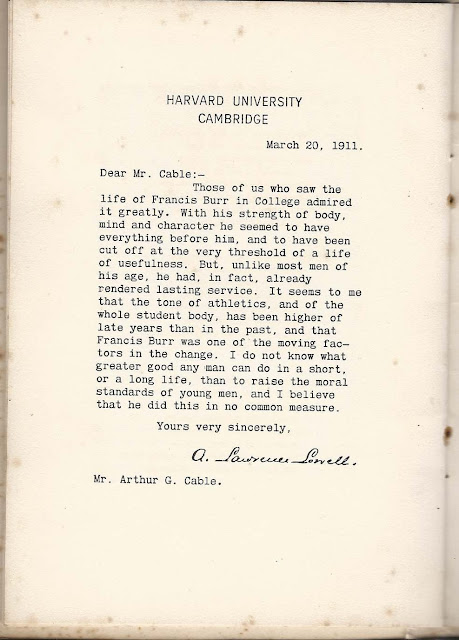 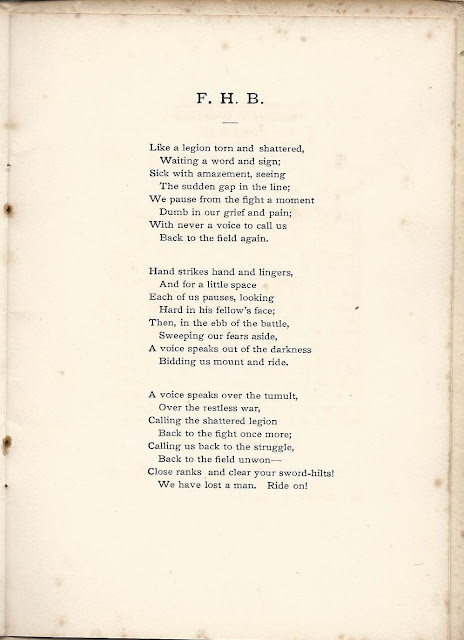 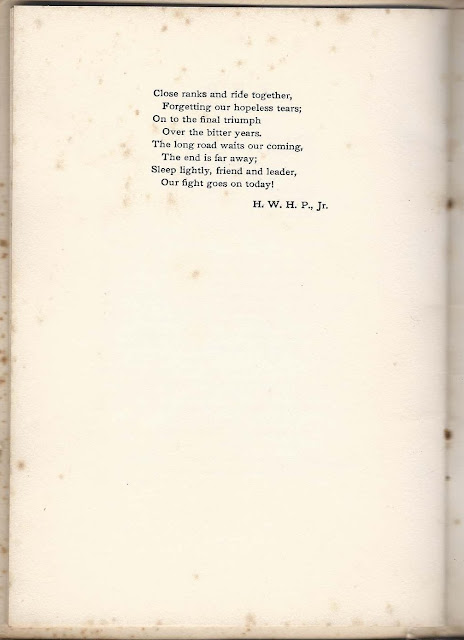 Posted by Pam Beveridge at 6:24 AM