Carbon Copy of a Genealogy of the Massachusetts/Maine Branch of the Hazen Family; by John Franklin Hazen (1891-1988) 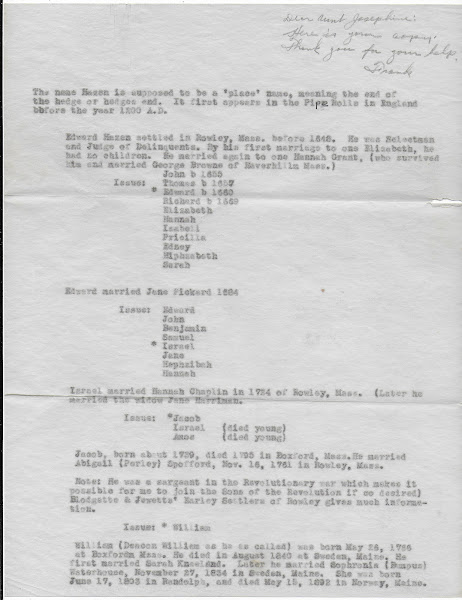 A carbon copy of a 4 page genealogy on the Massachusetts and Maine branch of the Hazen family, written by John Franklin Hazen (1891-1988), whose identity was confirmed when he called Charles Motley Hazen (1859-1950) his father.
This copy was directed to "Aunt Josephine", who contributed to the research.
Note: I haven't independently verified any of this research, so please use it as a guide only.  Further, some of the digits are hard to decipher, so take them with a grain of salt.  What follows is just a sampling.
The genealogy starts with Edward Hazen, who came from England to Rowley, Massachusetts, sometime before 1648.  The surname may have evolved from Heisende.
The genealogy notes that Edward married twice, with no issue from his first marriage to Elizabeth, and 11 children from his marriage to Hannah Grant.  After Edward's death, Hannah married George Browne of Haverhill, Massachusetts.
The genealogy then follows the descent from the third son, Edward, who was born in 1660.  This Edward married Jane Pickard about 1684. The genealogy then follows their son Israel, who married Hannah Chaplin in 1724. Three children are listed, two dying young.
The surviving child, Jacob, born about 1739, married Abigail (Perley) Spofford on November 16, 1761 in Rowley, Massachusetts. Later, Jacob married widow Jane Harriman. Jacob, who died in 1795 in Boxford, Massachusetts, was a veteran of the Revolutionary War.
Jacob's son William was born May 16, 1766 at Boxford, Massachusetts. He died in August 1840 in Sweden, Maine. William married 1) Sarah Kneeland; 2) Sophronia (Bumpus) Waterhouse (1805-1892) [birth date and place on her FindaGrave memorial are at odds with the information in this genealogy], on November 27, 1834 in Sweden, Maine. Sophronia, the daughter of Silas W. Bumpus and Keziah (Packard) Bumpus, was born June 17, 1803 in Randolph, Maine, and died May 15, 1892 in Norway, Maine. After William's death, Sophronia married John Merrill; she's buried in the Oak Grove Cemetery in Norway, Maine. "My father Charles Motley Hazen remembers her as smoking a TD pipe and telling him many stories of the civil war."
John Bunyan Hazen (1836-1918), son of William Hazen and Sophronia (Packard) Hazen Merrill, was born June 12, 1836.  John married Hattie Ricker Motley (abt 1837-1918), daughter of Joshua Ricker, on July 12, 1857 at Westbrook, Maine. John died May 10 [not sure of second digit], 1918 at Auburn, Maine, and is buried in the Pine Grove Cemetery in Norway, Maine. Hattie died April 12, 1918 and is believed to be buried in Harrison, Maine.  John Bunyan Hazen entered the Civil War at Abraham Lincoln's first call and was wounded three times. John built over 100 houses in Norway, Maine, and had a sawmill in Waterford, Maine.
Charles Motley Hazen (1859-1950), son of John Bunyan Hazen and Hattie (Ricker) Motley Hazen, was born April 1, 1859 at Westbrook, Maine. Charles had a sister, "Georgie", who died at about age 17, after contracting consumption from her fiancee, who also died of it.
Charles was named for his maternal grandfather, a Quaker and first mate on a privateer in the War of 1812. Charles married Lucia Anna Swain (1857-1940), who was born in Lovell, Maine, on January 9, 1857. They had three children, one of them the author of this genealogy, John Franklin Hazen (1891-1988) born December 15, 1891 in Beverly, Massachusetts.
John Franklin Hazen married Hazel Felton Norton (1894-1989) on April 12, 1916 in Beverly, Massachusetts; they had two children, John Franklin Hazen, Jr., and Charles Samuel Hazen.
The genealogy ends with research into other descendants of immigrant Edward Hazen and a list of notable people named Hazen.
If you have corrections and/or information to share, please leave a comment for the benefit of other researchers.
Posted by Pam Beveridge at 1:30 PM