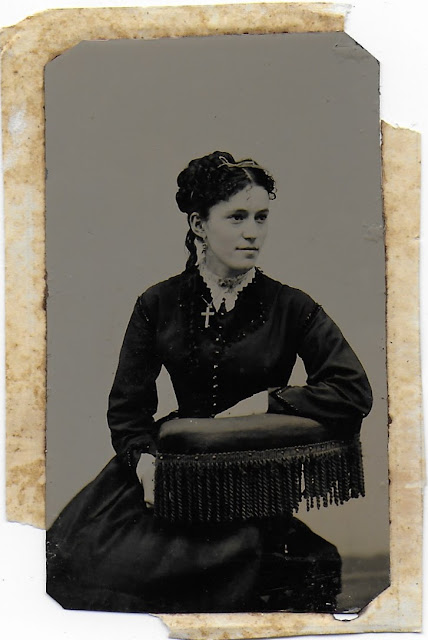 Tintype of a young woman identified on the jacket reverse as Rossanna Harlow of Brewer, Maine.  I believe she was Rosanna Mayo Harlow (1844-1889), daughter of Ivory Harlow, Jr., and Rachel Doane (Mayo) Harlow.

The record for their Intention to Marry, dated 2 November 1834 at Sangerville, Maine, shows residences of Sangerville and Hampden, Maine, for Ivory and Rachel, respectively.

Rossana and her twin sister Rosilla Morgan Harlow were born 5 June 1844 at Sangerville, Maine.  According to the record, the girls had four older brothers: 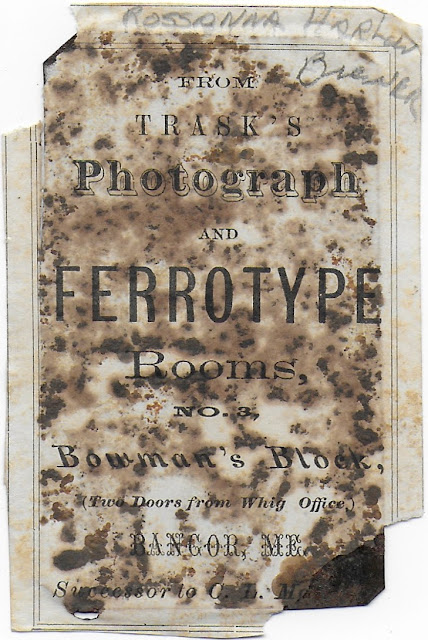 At some point, the Harlow family moved to Brewer, Maine, where Ivory Harlow had a brickyard.  Rosanna's twin Rosilla died in 1878 and Rosanna herself in 1889. They, their parents, siblings and other relatives are buried in the Oak Hill Cemetery in Brewer, Maine.

If you have information on the Harlow and Mayo families of Piscataquis and Penobscot Counties in  Maine, please leave a comment or contact me directly.