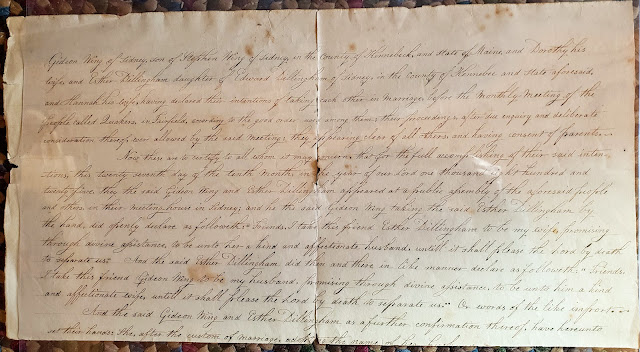 Large document recording the marriage between Gideon Wing and Esther Dillingham at Sidney, Maine, on the 27th day of the tenth month of 1825, as written in the style of Friends/Quakers.

The document indicates that the couple had announced their intention to marry at the "monthly meeting of the people called Quakers, in Fairfield..."

See a transcription and the signatures of 25 people farther below.

The document measures approximately 17-1/2" by 19" and is now in three pieces: the section shown above and the two bottom sections that have separated from the top and from each other.  Please excuse the poor images, as this item is too large for my scanner. 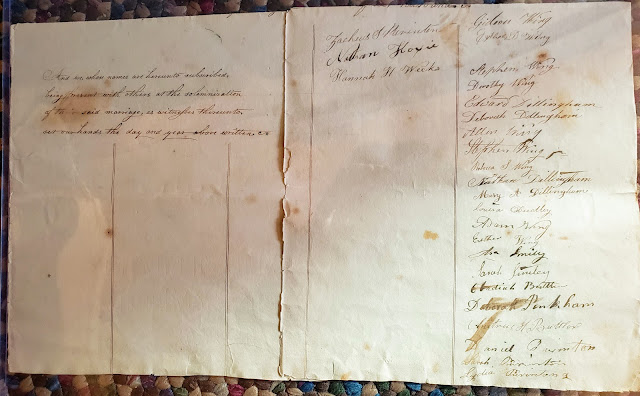 An article in a 1904 issue of The Owl notes that Gideon Wing was the son of Stephen Wing and Deborah (Allen) Wing and that he married his first wife Zeruah Gifford, daughter of William and Emma Gifford, on 16 November 1817. Her death date was then given as 1880, which is intriguing; perhaps a typo.  In the description of Gideon's second marriage to Esther Dillingham, her mother's maiden name was given as Hannah Weeks.

Gideon Wing of Sidney, son of Stephen Wing of Sidney, in the county of Kennebeck, and state of Maine, and Dorothy, his wife, and Esther Dillingham, daughter of Edward Dillingham of Sidney, in the county of Kennebec and state aforesaid, and Hannah his wife, having declared their intentions of taking each other in Marriage, before the Monthly Meeting of the people called Quakers, in Fairfield, according to the good order used among them, their proceedings, after due enquiry and deliberate consideration thereof, were allowed by the said Meeting, they appearing clear of all others, and having consent of parents.

And the said Gideon Wing and Esther Dillingham as a further confirmation thereof, have hereunto set their hands:  she, after the custom of marriage, adopting the name of her husband.

And we, whose names are hereunto subscribed, being present with others at the solemnization of their said marriage, as Witnesses thereunto, set our hands the day and year above written.