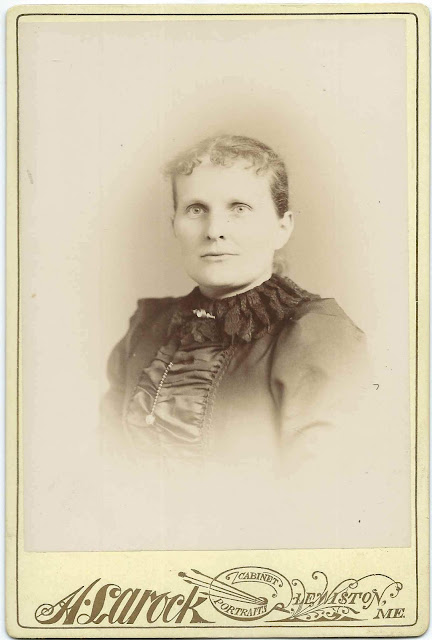 Cabinet photograph dated 1892 of a woman identified on the reverse as Mrs. Fannie Bartlett of Bartlett Mills, N.B., presumably the village in Bayside, New Brunswick, Canada.  The photograph was taken at the A. LaRock studio at 277 Lisbon Street, Lewiston, Maine. 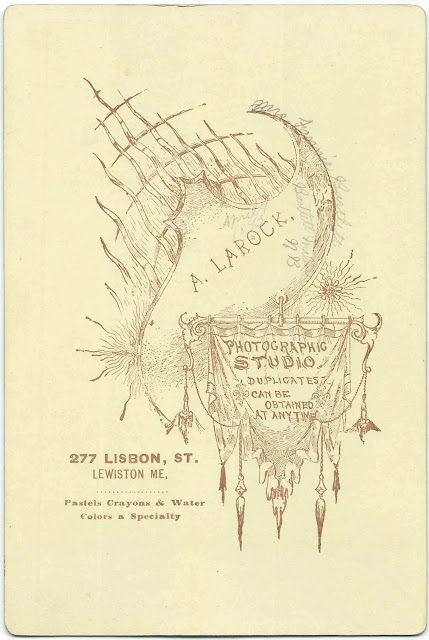 Fannie may have been Frances Augusta (Rogerson) Bartlett (1856-1939), "Fannie", wife of Edward Hitchings Bartlett (1855-1928), based on the similarity of the above photograph with one of that Fannie on an online tree, albeit as an elderly woman.

There's also the fact that Fannie's sister, Statira Jane (Rogerson) Head had married Francis Edmund Head in 1883 at Lewiston, Maine, where they would make their home.

Eunice died at Lewiston, Maine, in 1884, but I don't know if they, or she separately, had moved there or she was just visiting daughter Statira Jane. Thomas remarried later that year and lived the rest of his life in New Brunswick.

In 1892 when the photograph was taken, Fannie may have been visiting her sister, Statira Jane (Rogerson) Head and family. Statira, however, was not the only sibling who moved to Maine.

If you have an alternate theory as to Fannie's identity, please leave a comment or contact me directly.

Posted by Pam Beveridge at 7:17 AM