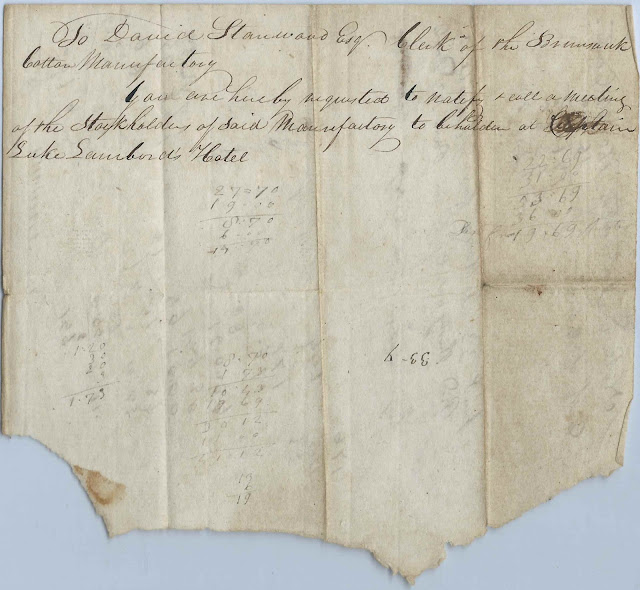 Circa 1815 document with one side, shown above, containing instructions for David Stanwood, Clerk of the Brunswick Cotton Manufactory, to call a meeting of the Shareholders of that firm, to be held at the hotel of Luke Lambard.  This document pertains to the Midcoast area of Maine, including the towns of Brunswick, Bath and environs. 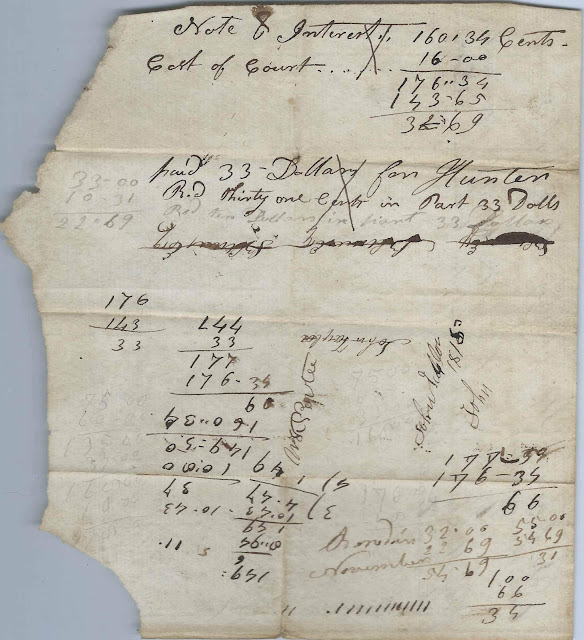 Interestingly, I found a sources online that state that the Brunswick Cotton Manufactory was the first cotton mill in Maine, petitioned for incorporation to the Commonwealth of Massachusetts in 1808 and opened in 1809.

David Stanwood was presumably the Colonel David Stanwood, born in 1788 at Brunswick, Maine, as described in a sketch on pages 156 and 157 (with his likeness on a page intervening) in A History of the Stanwood Family in America, by Ethel Stanwood Bolton, published in 1899.  Col. Stanwood was a graduate of Bowdoin College, a lawyer at Brunswick and a Colonel in the Maine Volunteer Militia.  In 1816, around the time of this document, he married Caroline Peace Lee.  I should note that there were several other men named David Stanwood.

There were two men by the name of Luke Lambard in Bath, Maine, one born about 1730 in Massachusetts, who died in 1820, and the younger who was born about 1770 and died in 1854.  I'm not sure which one of them owned the hotel mentioned in the document above.  One of them is mentioned in a document of 1801 where the selectmen of Bath, Maine, vouched for his character.  It was presumably the younger Luke, or maybe even a younger one still, who applied to the U.S. Marshall in 1820 to be the census enumerator for three more towns; in his application he drew a map of the towns he was already enumerating.  While researching Luke Lambard, I came across several online sites that show examples of the beautiful artwork of his daughters Rachel and Elizabeth.

If you have an alternate identity for either David Smallwood or Luke Lambard or a theory as to the identity of John Taylor [or Taybor or Tabor or Taber], please leave a comment or contact me directly.  I'd also like to hear your thoughts on what appears to be the surname Hunter.

Posted by Pam Beveridge at 1:04 PM