1863 Document: George F. Emery, Clerk of Maine District Court, Certifies that Jesse Davis is a Justice of the Peace for Androscoggin County 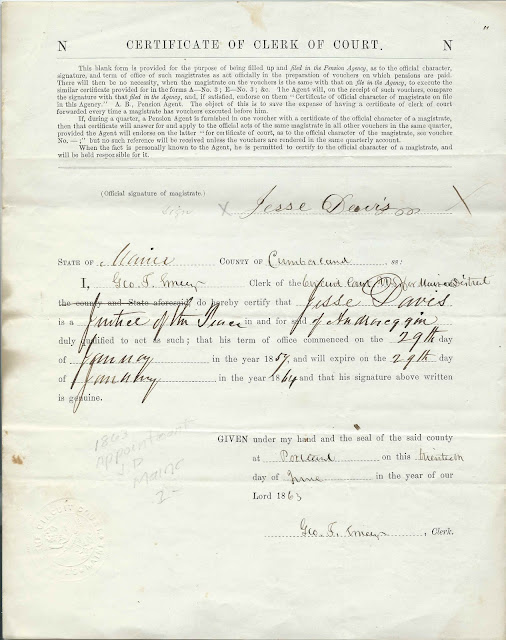 June 20, 1863 document signed by George F. Emery, Clerk of the Circuit Court for the Maine District, at Cumberland County, Maine, to certify that Jesse Davis was then a Justice of the Peace for Androscoggin County, Maine, in the midst of a term from January 29, 1857 to January 29, 1864.

The document measures a bit over 10" by 8"; nothing appears on the reverse.

George Freeman Emery graduated from Bowdoin College in 1836, according to the excerpt shown below, from the Third General Catalogue of Colby College, Waterville, Maine, 1820-1908, which indicates that he was made an honorary graduate of Colby in 1891: 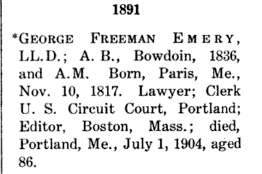 I wonder if Jesse Davis was this Jesse Davis from the Webster section of Sabattus, Maine, born July 21, 1814, whose Find a Grave memorial notes that he was was a selectman of Webster, a Senator in the 51st Legislature of Maine, Lisbon's town treasurer, Justice of the Peace, Captain in the Maine Militia and founder of the Manufacturer's Bank of Lewiston.  This Jesse Davis married Mary Ann Woodbury/Woodberry.

If you have a different take on the identifies of George F. Emery and Jesse Davis, please leave a comment or contact me directly.