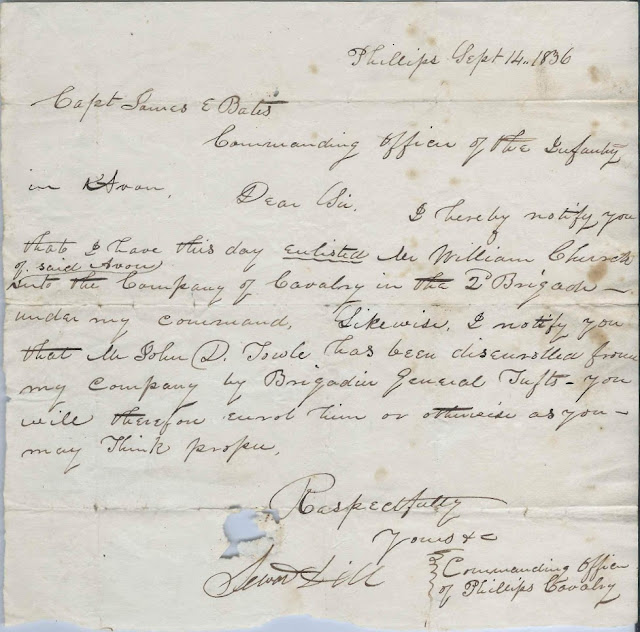 The letter measures nearly 8" by 7-1/2" and contains one hole and ragged left and bottom margins.  There's nothing written on the reverse.

Dill was writing Capt. Bates to inform him that Dill had recently enlisted Mr. William Church into the Company of Cavalry in the 2nd Brigade and that John D. Towle had been dis-enrolled from Dill's company by Brigadier General Tufts, freeing Towle up to be enrolled elsewhere, as Capt. Bates would think proper.

Seward Dill may have been the Seward Dill born about 1808 at Lewiston, Maine, who lived in the Phillips area for a while before moving to Soquel, California, where he died.  He married Shual Wheeler Hammond.

James E. Bates was presumably James Erskine Bates who was born about 1809 and was postmaster at Avon, Maine, near Phillips.  He was married thrice: 1) Sally (Doble) Bates, who died about 1848; 2) Dorcas (Cook ?) Bates, who died about 1857; 3) Sarah Hamlin (Chick) Bates.  Information on his wives obtained from Historic Homes and Places and Genealogical and Personal Memoirs Relating to the Families of Middlesex County, Massachusetts, Volume 4, by William Richard Cutter, published in 1908.

John D. Towle was presumably John Darling Towle, who was born about 1809 at Avon, Maine, and married Patience Dow.